How often do you discuss European Union (EU) political matters with others? Do you feel that your voice counts in the way the EU conducts its business? Did you vote in the latest elections for the European Parliament (EP)?

In a newly published article, we explain that the way people answer these questions depends, in part, on the extent to which they live their lives “across” the national borders of EU member states. Transnational citizens are more likely to engage in such forms of political behaviour.

Transnationalism is a broad concept used to describe the ways people’s backgrounds, interactions, and practices go beyond the national borders in the EU (Recchi and Favell 2019). Individual-level transnationalism is the sum of peoples’ experiences with forms of physical movement and short or long-term settlement (e.g., having completed an internship in another EU country), personal background (e.g., having dual citizenship and/or close relatives who are citizens of another EU country), and cultural competences and consumption patterns (e.g., speaking a foreign language). Until they were disrupted by government restrictions imposed as a result of the COVID-19 pandemic, short-term and virtual forms of mobility had been proliferating across the EU over the last decades. Interactions, consumption patterns, and cultural competences are more and more frequently cutting across national borders in Europe.

It is unsurprising, then, that transnationalism and EU integration are mutually reinforcing. Previous research has shown that more transnational individuals are less Eurosceptic and identify more as “Europeans” (Kuhn 2015), and that they show solidarity with fellow member states (Ciornei and Recchi 2017) and generosity towards other Europeans (Kuhn et al. 2018). While individuals who have direct and indirect connections with other European citizens and cultures have been viewed as a key social category in EU integration “from below,” the extent to which individual transnationalism is linked to the Europeanisation of political involvement was an open question that we tried to answer in our paper.

Our analyses, which are based on survey data collected in ten EU countries after the 2019 EP elections, consistently show that the more transnational an individual is, the more they are likely to be part of (positive) discursive networks centred on the EU, to feel that their voice is heard in EU institutions, and to report that they showed up at the polling station to cast a vote in EP elections. 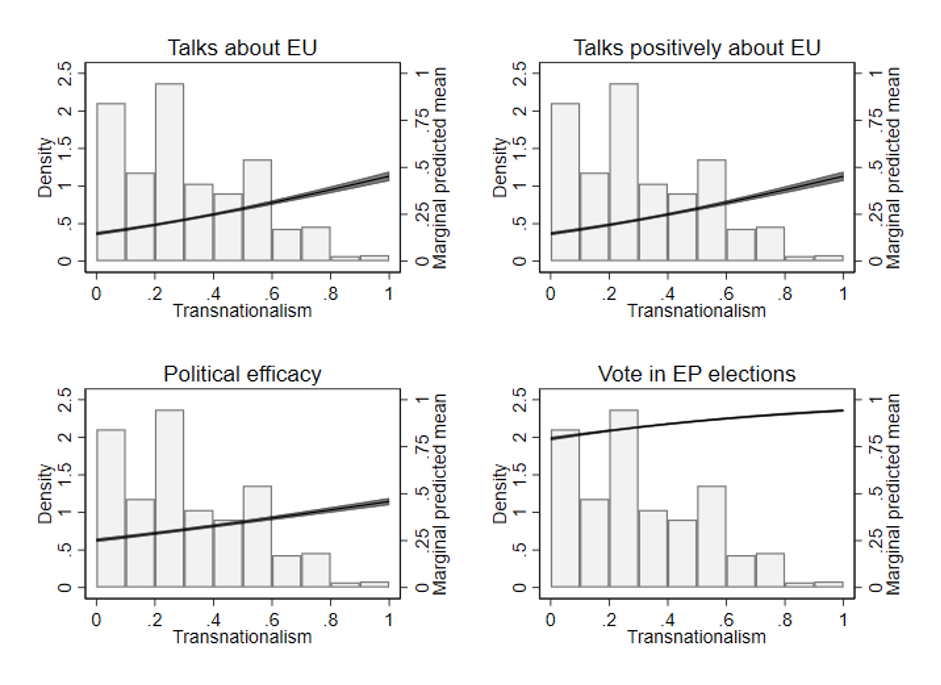 Note: The figure shows the marginal effects of transnationalism on components of EU politicisation using data from the “Reconciling Economic and Social Europe: The Role of Values, Ideas and Politics” (REScEU) project. For more information, see the authors’ accompanying paper.

We argue that transnationalism fosters participation in EU politics by increasing the level of connectedness the individual feels to the European space, which they experience as an “appropriate” political unit. Cross-border interactions, background, and competences make people feel more embedded in Europe; hitherto distant places become familiar, and strangers turn into fellow EU citizens. Transnational mobilities also offer opportunities to learn and acquire information about the EU and/or other member states, as well as to develop a vested interest in keeping borders open and European integration apace.

The reduction of psychological and cognitive distances brought by transnational experiences is key because it is thought to tackle the EU’s “democratic deficit” at its core. Most citizens, it is argued, feel disconnected from the EU and are therefore uninterested in participating in its politics. Indicatively, even as EP elections increasingly revolve around genuine European issues (van der Brug, Gattermann, and de Vreese 2022), turnout levels are consistently lower than in national general elections, as Figure 2 shows. Transnationalism, then, by boosting popular engagement in supranational politics and, hence, democratic legitimacy, constitutes a potential remedy for the EU’s democratic deficit. 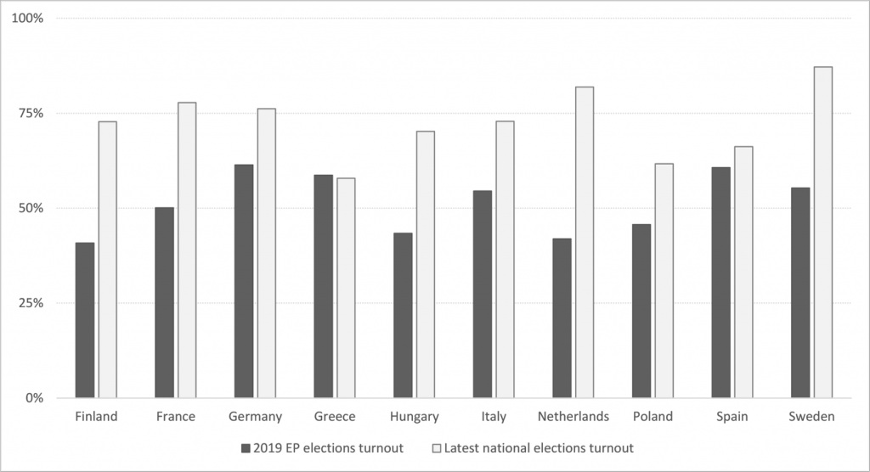 While we are amongst the first to establish a positive relationship between transnationalism and EU political participation in particular, our findings fit into a broad pattern of mutually reinforcing transnationalism and EU integration. On the one hand, EU integration boosts cross-border interactions and mobility, while on the other, those engaging in such practices are expected to welcome EU integration as a source of opportunity because they are more likely to have cosmopolitan attitudes (Kuhn 2011, 2015).

However, with the outbreak of the COVID-19 pandemic, it has become harder to interact with other European citizens, which our study proves is important for fostering EU-level participation and awareness. The border closures and mobility restrictions that accompanied the pandemic have brought into sharp relief the fragility of the social and cultural underpinnings of European democracy.