While there are signs that social dialogue has been revitalized after the euro crisis, its full recovery as a policy-making tool is yet to come.

The economic crisis that hit the European Union in 2008-9 had important implications for social dialogue across the Member States. At the onset of the crisis, many governments adopted a neo-Keynesian policy response to boost demand, thereby encouraging the involvement of the social partners (employer associations and trade unions) in the drafting and implementation of policies such as temporary layoffs or Kurzarbeit. Thereafter, the worsening economic situation required the deployment of fiscal consolidation programmes, which led to the weakening of tripartite social dialogue in a number of countries.

As the crisis gradually subsided by 2013, most Member States witnessed a recovery in GDP growth and employment. However, unemployment and income disparities between the Member States widened over the crisis years, and are likely to persist. At the same time, there are signs that social dialogue has been partly revitalized across the EU, both at the national and supranational level. Yet, the full recovery of its function as a policy-making tool is far from being complete, even in countries that witnessed a strong economic performance.

Evidence on the economic and political situation across the EU shows that even in those countries that have experienced tangible economic improvements, the latter have not always translated into a full recovery of social dialogue. Two main reasons may account for this. First, political instability has weighed down against a rapid recovery of social dialogue in some countries. As Table 1 shows, among the 11 countries analysed, only Germany, Lithuania and Sweden did not experience a crisis-related government demise between 2009 and 2015. The remaining eight countries had, on average, over four governments each during that period. 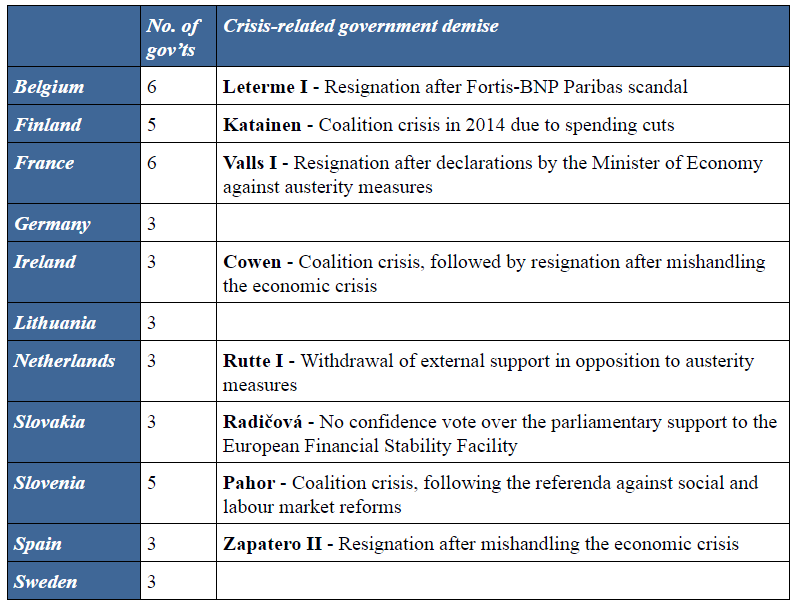 Moreover, the trust between social partners and the government has in a number of cases eroded, and still has to be gradually rebuilt. This latter process is more difficult in a context of disagreement on the right policy mix to sustain economic recovery and of apparent erosion in the social partners’ representation capacity. In fact, the revitalization of social dialogue has undergone markedly different paths in the cases at hand.

Uneven revitalization of social dialogue in the aftermath of the crisis

A general trend towards the revitalization of social dialogue in the post-crisis period has been witnessed by the vast majority of the countries analysed here, varying greatly, however, in terms of intensity, mechanisms and outcomes delivered. Four different trajectories can be detected, as shown in Table 2.

Set (a) includes countries where social dialogue has been maintained successfully throughout the whole period under analysis. All Member States that have traditionally displayed strong and continuous engagement of the social partners and government in the definition of national socioeconomic policy fared relatively well (Germany, the Netherlands, Sweden).

Ad hoc National Social Dialogue Institutions have been established in several Member States to specifically cope with the crisis. Among these, we identified as prominent good practices the social summits and social conferences sustaining social dialogue in France, respectively, under presidents Sarkozy and Hollande. Similarly, in Germany ad hoc bi- and tripartite meetings between the German social partners and the government took place, and Land Brandenburg founded a new and unprecedented regional NSDI. Finally, Slovakia established specific anti-crisis bi- and tripartite bodies, such as the Council for Solidarity and Development (Rada solidarity a rozvoja).

Combination (b) instead entails a lack of social dialogue in both the crisis and post-crisis period. Countries such as Ireland and Spain have seen a deterioration of tripartism during and after the crisis, which is probably related to the less systematic nature of their social dialogue practices that had been used in the past decades to successfully bid for Eurozone membership.

In these countries, but also in Hungary and Romania, the NSDIs have played a less important role in policymaking during the crisis. Nevertheless, some good practices have emerged. In Spain and elsewhere, there has been a surge in bipartite union-employer peak level or inter-sectoral negotiations, that can be interpreted as a clear response of the social partners to an erosion of trust in governmental action.

Several countries fall into set (c), where a revitalization of social dialogue in the post-crisis period followed a situation of discontinuity during the crisis. Here, different reasons account for a worsening of relations between the social partners and the governments during the crisis, which were somewhat overcome later on. The governments in Lithuania and in Slovenia overrode the respective NSDIs (the Tripartite Council and the Economic and Social Council) regarding crucial socioeconomic decisions. This triggered the temporary abandonment of social dialogue by the social partners. In Belgium, instead, NSDIs came under strain due to tensions between employers and the unions. At the regional level, in Flanders, social dialogue continued to function smoothly.

Finally, type (d) consists of discontinuity in the post-crisis period, following continuity during it. Finland, in particular, has been hit by multiple shocks in the past two decades (the Russian crisis, Nokia’s crisis, etc.) These worsened the functioning of social dialogue as the crisis continued unabated. Hence, while the Economic Council worked more or less smoothly until 2015, recently the employers withdrew from collective bargaining and Juha Sipilä’s Government threatened to act unilaterally.

At the EU level, efforts to include the social partners have been stepped up by the Juncker Commission, leading to positive results. In particular, the social partners are now consulted prior to the publication of the so-called Annual Growth Survey.

In sum, despite the obvious positive examples, the relatively widespread erosion experienced during the crisis, calls for more efforts from social partners, political commitment and institutional support for social dialogue. A positive response has somewhat come from the European institutions.

Social dialogue within the European Semester

The European Semester has become an important mechanism for economic policy coordination across the Member States. The contribution of social dialogue to the European Semester is, hence, particularly important to achieve the right mix between macroeconomic stability and socially inclusive policies and strengthen the democratic dimension of EU governance.

Due to adverse economic circumstances and a related lack of trust, the contribution of the social partners and of social dialogue has been modest at first. However, several developments have led to improvements in recent years. At the EU level, efforts to include the social partners have been stepped up by the Juncker Commission, leading to positive results. In particular, the social partners are now consulted prior to the publication of the so-called Annual Growth Survey. Since 2015, the Country Reports are published three months earlier to allow for a more informed debate.

At the national level, the recommendations are to consult the social partners within the drafting of National Reform Programmes and involve them in the design and implementation of relevant policies and reforms. To this end, the creation of European Semester Officers (ESOs) in 2012 was an important step. ESOs are economic policy experts based in the EC Representations in the Member States. In several instances, the ESOs were conducive to a positive development of relations between European officials, the government and the social partners.

social dialogue is not self-sustaining, but requires active policy commitment, institutional support and improved technical capacities of the social partners.

The outcomes have been encouraging: although the structures through which the social partners are involved do not fully guarantee the institutionalization of social dialogue, and situations differ significantly from one Member State to another, the regularity and predictability of consultations within the European Semester has noticeably increased.

As made clear throughout this article, social dialogue is not self-sustaining, but requires active policy commitment, institutional support and improved technical capacities of the social partners. Despite some positive developments both at national and supranational levels, and the existence of different mechanisms and policy options, the role of political agency—the active involvement of policymakers—is key for the continuing revitalization of social dialogue in the post-crisis period. Given the importance of social partnership in the completion of the Economic and Monetary Union, successful social dialogue will be central piece in addressing the challenges facing industrial relations in the post-crisis period, including wage-setting, coordination, and declining collective bargaining coverage.

This article is based on the forthcoming International Labour Organization’s study “Post-crisis social dialogue: Good practices in the EU-28”, edited by Igor Guardiancich and Oscar Molina. The study analyses the post-crisis developments in the areas of social dialogue and industrial relations in the eleven Member States covered by the article. The views expressed here reflect solely the author’s position and should not be taken as the official position of the ILO.