MFF 2021-2027: Winners and losers across the EU from a social policy perspective

This article is the first part of a focus on the financial resources destined for cohesion policy within the MFF. We are going to discuss how geographical eligibility changed in the Commission’s proposal when compared with the previous MFF (2014–2020). Moreover, we are going to focus on the resources that are going to be allocated to social Europe with the new ESF+.

At the end of May 2018, the European Commission published an explanatory memorandum in which it clarified some of the financial implications of the recent Communication on the Multiannual Financial Framework (MFF) for 2021–2027. The early proposal on the future MFF contained some clues on how the EU is going to try and improve the life chances of its denizens, especially by rationalizing the current social expenditure under the new “ESF+” instrument; the recent memorandum, on the other hand, includes some relevant indications on how the financial resources are going to be distributed among the member states. Since the European Council is entering the final negotiations on the MFF, it may be useful to revise the Commission’s proposal to understand how the conflict dynamics of social Europe are going to evolve in the next few months. This article is the first part of a larger focus on the financial resources destined for cohesion policy, which is where the EU budget concentrates most of its social expenditure. We are going to discuss how geographical eligibility changed in the Commission’s proposal when compared with the previous MFF (2014–2020) and then we are going to focus on the resources that are going to be allocated to social Europe with the new ESF+.

Since 1988, the redistributive component of cohesion policy has comprised two parts. On the one hand, all the regions of the Community are eligible to receive financial support from the policy, regardless of their specific economic and social status. Due to the concentration principle, cohesion policy mainly channels its expenditure into the “less developed regions” (LDRs). A smaller component of the resources is then directed at the so-called “transition regions” (TRs) and at the “more developed regions” (MDRs). While the 2021-2027 proposal retains the 2014-2020 nomenclature, there have been some relevant changes for what concerns the “transition regions.” In the previous MFF, the Commission identified as “transition regions” those with a GDP per capita of between 75% and 90% of the average GDP of the EU-28. In the Commission’s proposal, the category is extended to those regions that fall below 100% and are above 75% of the average GDP of the EU-27. As figure 1 shows, the relevance of the single categories has also changed. There has been an increase in the allocations for both the LDRs and the TRs on the total allocations. 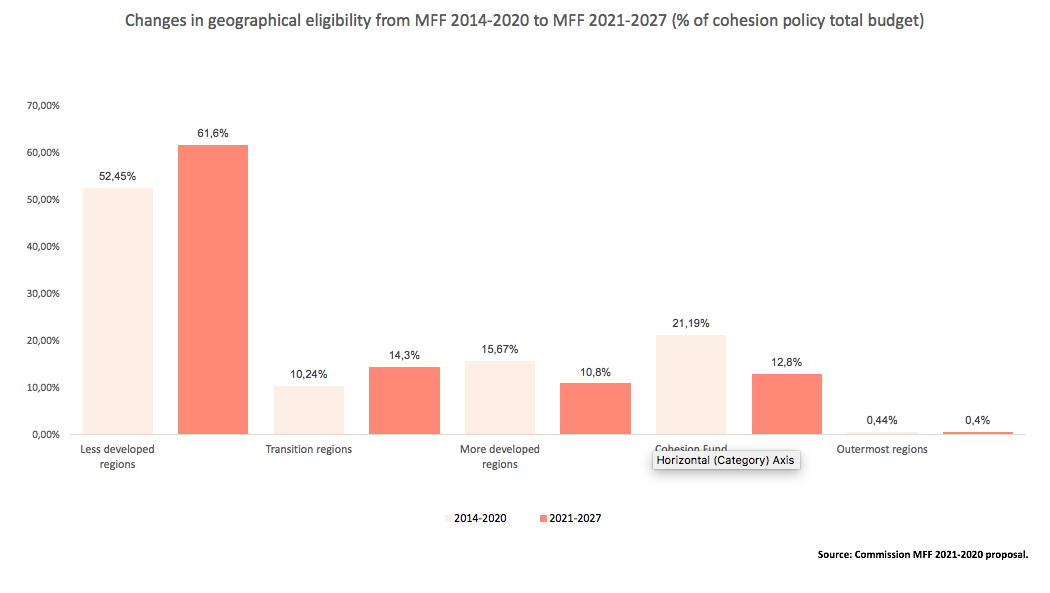 On the other hand, the resources for the MDRs are slightly decreased, something that can be attributed to the fact that some of the former MDRs have now received TR status. The Cohesion Fund has also been substantially reduced – by almost 46% in real terms when compared with the previous programming period.

In the next MFF, concerning employment-related policies, the legacy of the YEI will be carried through by means of compulsory earmarking: member states with an above EU average of young people neither in employment nor in education or training (NEET) will be required to allocate at least 10% of their resources in tackling youth unemployment.

The changes in the eligibility criteria, coupled with the effects of the recent economic crisis, will relevantly alter the allocation of funds in the European regions. A significant number of southern European regions will change their status from TRs to LDRs, adding up to 14.2 million EU citizens being assisted under a more generous regime. A second group is composed of a large number of former MDRs that will switch their status to TRs, for a grand total of 42.6 million EU denizens receiving aid. A large number of these regions are directly benefitting from the aforementioned threshold change: many regions with their average per capita GDP above the 90% threshold would, in fact, have been previously assisted as MDRs. Following the new Commission’s proposal, 37.2 million European citizens whose average GDP is above 90% and below the 100% threshold will potentially benefit from the TR assistance. It is worth noting the fact that almost 54% of them are from French regions. The rest are mostly concentrated in southern European member states (27.1%), especially Spain and Italy, and northern European member states (15.8%), such as Finland, the Netherlands and Belgium. Finally, a group of (mostly) eastern European member states have also “graduated” from LDR to TR status, for a total of 13.7 million EU denizens.

To understand what is at stake, it may be useful to take a look at some data from the EPRC Delft report on this very same subject. As Figure 2 shows, the LDRs will receive slightly more resources (€230 per capita, 8.1% increase) than in the past. The TRs, although they will receive less than during the previous MFF (-20.7%, €58 per capita), are still benefitting when compared with the MDRs, which will receive only €24 per capita. Cohesion Fund countries are those receiving the biggest cut when compared with the previous MFF: -43.7%. 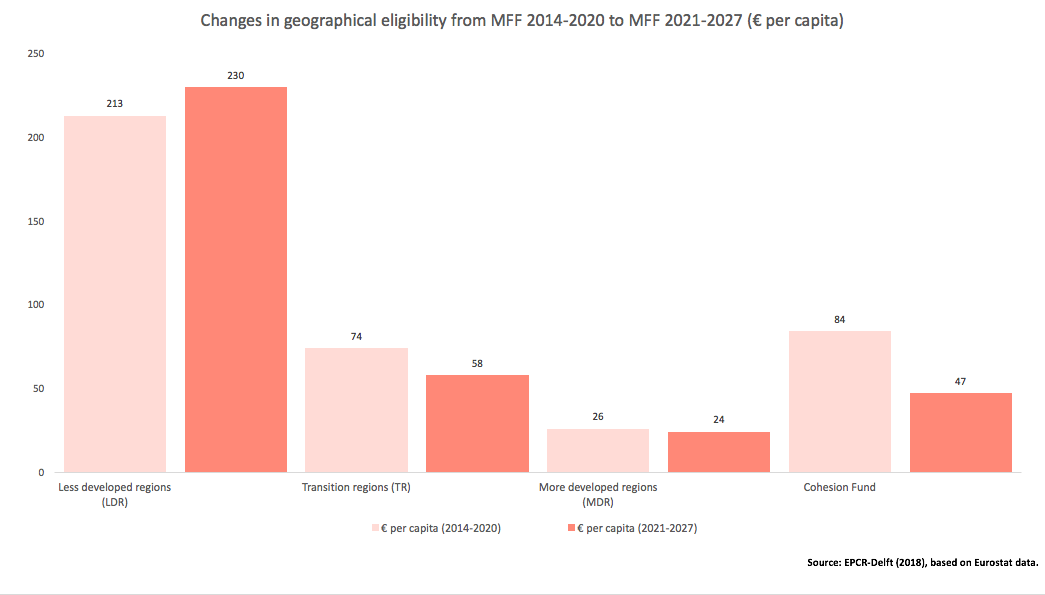 This picture can give us a preliminary idea about which regions will be the “winners and losers” if the Commission’s proposal is approved. On the one hand, the MDRs, especially those from southern Europe, will certainly benefit from the new MFF. At the same time, the TRs can be roughly split into two groups. One group, mostly composed of eastern European regions, will, on the one hand, receive less assistance than if they remained LDRs. This is even truer when considering the reduced Cohesion Fund assistance, which is mainly benefitting eastern European member states (plus Greece and Portugal). On the other hand, these very regions would have benefitted more from the TR status if the total number of transition regions had remained stable through the new MFF. But this is not the case, arguably because of the threshold change proposed by the Commission. This leads us to the third group of regions, in which between 90% and 100% of the average GDP per capita of the EU-27 can be found, and which is now aided under the TR status. These regions are now taking far more generous assistance than what they would have received in the past, and are certainly benefitting from the new MFF geographical eligibility reform.

What is in it for social Europe?

Finally, let us divert our attention from the sheer budgetary policy and take a look at something that will be delivered concretely (if not exclusively) with cohesion policy: social Europe. Although it cannot provide a punctual estimation of the financial resources destined for the various social policy objectives, the memorandum on the Commission’s proposal can still shed some light on its evolution.

The new MFF puts a stronger emphasis on the social component of cohesion policy, by rationalizing some of the disparate funds that are part of social Europe.

As already mentioned, the main instrument for delivering social policy will be the ESF+. This instrument will result from incorporating four previously separate funds: the Youth Employment Initiative (YEI), the Fund for European Aid to the Most Deprived (FEAD), the Employment and Social Innovation programme (EASI) and the EU Health Programme. One notable exception is the European Globalisation Adjustment Fund (EGF), which will continue to exist outside the ESF+, the rationale being that its “very specific objectives, high political visibility and budgetary flexibility” would be lost if it was incorporated within the ESF+.

Notwithstanding the merger, the specific objectives of some of the funds will still be pursued. The new ESF+, in fact, will be fostered with a view to achieving three main objectives: employment, education and social inclusion. With regard to employment, the legacy of the YEI will be carried through by means of compulsory earmarking: member states with an above EU average of young people neither in employment nor in education or training (NEET) will be required to allocate at least 10% of their resources in tackling youth unemployment. As regards social inclusion, at least 25% of their ESF+ share will be allocated by the member states to this objective, including at least 2% towards contrasting “severe material deprivation”, following the FEAD objective. All in all, the share of the ESF+ will be increased from the previous MFF 2014–2020 23.1% to 27% of the total cohesion policy budget. All that glitters is not gold: the ESF+, in fact, will consist of €89.7 million in constant (2018) prices, which, according to the European Parliament, constitutes “a 7% cut in the ESF, in spite of its enlarged scope”.

The new MFF puts a stronger emphasis on the social component of cohesion policy, by rationalizing some of the disparate funds that are part of social Europe. Notwithstanding this, the Commission struggles with a less than ambitious budget. On the one hand, the total share of the ESF will be reduced when compared with the past MFF. On the other hand, the reform of the geographical eligibility seems already to suggest that some of the member states, especially those in eastern Europe, will receive less assistance than in the past, while the remaining resources will be distributed in areas that are still struggling with the aftermath of the economic crisis, such as southern Europe, or in areas, such as France and Finland, where Euroscepticism is on the rise. In the follow-up to this focus, we will look in more detail at how the resources are distributed among the member states and try and confirm these preliminary observations on the 2021–2027 MFF Commission’s proposal.

MFF – Proposal for a stronger Europe?

The European Commission proposed to substantially change the allocation of different spending priorities. In general, the EU budget will reinforce the existing thematic priorities in the field of research, environmental policies, youth policies, migration and borders, security and external action.

Since 1988, cohesion policy has contributed to give visibility to the EU. “No one falls in love with a market”, was Jacques Delors’s frequent admonishment in the late eighties. His fear was that, if Europe was only to be a free trade area, the average citizen would perceive its construction as elitist