Is debt restructuring the right solution for Greece?

Contrary to what the IMF says, the solution to Greece’s woes is not more debt restructuring, but further structural reforms to make the country grow again.

After three bailout programmes and 250 billion euros, here we are again talking about Greece, debt restructuring, and a possible “Grexit”, as nothing good has happened in the last few years. In fact, since 2000, Greece’s per capita GDP has dropped by about 25%: it reached the bottom in 2013, and since then the economy has been basically flat. Who is to blame? According to Vassillis Papadopoulos, a Greek waiter interviewed by the Guardian, it is the international creditors, who “every day destroy our country a little bit more”. But is he right?

The latest aid package, approved last summer by the current Greek government, requires reforms aimed at increasing tax revenues, stabilizing the budget, and improving competition in many sectors of the economy, in exchange for financial support by the International Monetary Fund (IMF) and the Eurozone members. One of the package’s conditions, now at the centre of the public and policy debate, is a commitment on the part of Greece to run a primary budget surplus (i.e., excluding interest payments on the public debt) of 3.5% of GDP for a very long time, starting in 2018. The IMF is now asking Eurozone members—Greece’s main creditors—to accept a debt restructuring in the form of a haircut on the outstanding debt, and increase of maturity, and/or a reduction of interest rates. All these different measures imply, de facto, a new partial default. According to the IMF, it is not realistic for Greece to start growing again as long as the country must stick to its primary surplus commitments. A lower target of 1.5% of GDP would be for the Fund both more realistic and more compatible with economic growth.

Even if we could erase, in this very moment, the country’s entire expenditure on interest payments, Greece would still not be able to cover its public outlays.

However, it is unlikely that a new, lower target for a primary surplus could, by itself, help Greece. The same is true for debt restructuring, which would certainly gain a lot of media attention—so helping the Syriza-led government—but would not do much for Greece and Greeks. In fact, even though public debt in Greece has now reached a mind-boggling 180% of GDP, interest payments on it are relatively modest (about 4% of GDP) given the very generous conditions applied by creditors (mostly the IMF and Eurozone members) in terms of both maturity and interest rates. If Greece does not grow, therefore, it is not because of its high public debt or interest payments. Even if we could erase, in this very moment, the country’s entire expenditure on interest payments, Greece would still not be able to cover its public outlays. 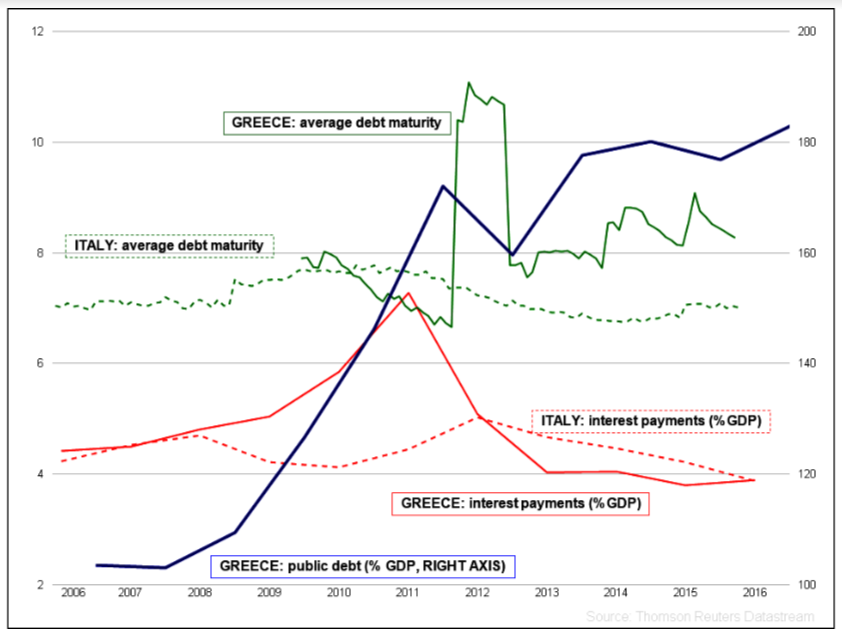 In fact, since 2000, Greece has never been able to achieve a primary budget surplus and, even subtracting interest payments, tax revenues are not large enough to cover public expenditures. Various governments in the past years, sometimes pressured by international creditors, have implemented important reforms, which have made Greece a more modern country with a more competitive economy. These reforms took a significant toll on Greek households, which have seen their disposable income shrink, and currently face an unemployment rate of more than 20%.

The benefits of debt restructuring are very limited, while its reputational costs vis-à-vis the international financial markets are very large and long-lasting.

Unfortunately, these reforms are still not enough, for Greece still lags behind most of its Eurozone partners in terms of competitiveness. A few examples: expenditure on public pensions is still about 15% of GDP: about twice the OECD average; for every retiree there are only 1.7 Greeks working; more than half of the country’s households are exempted from filing taxes; many sectors of the economy are still closed to competition; finally, the plan to sell publicly owned companies and assets is basically frozen. If in 2014 Greece had, after a lot of effort, managed to balance the primary budget and started to grow again, the economy has been deteriorating again after last summer’s referendum, the country’s near exit from the Eurozone, and the complete destruction of its financial system.

Growth is the key

What should be done? Even though some of the country’s current economic difficulties might have been exacerbated by the reforms imposed, sometimes harshly, by the so-called troika of international creditors, Greeks need to continue on the long and hard path of structural reforms. Only sustained economic growth can save Greece. The benefits of debt restructuring are very limited, while its reputational costs vis-à-vis the international financial markets are very large and long-lasting. As Greece transitions to a healthier and more competitive economy, Eurozone members should help its citizens who are facing hurdles—similarly to the sort of assistance typically implemented in cases of natural catastrophes (e.g. by sending medicines, medical supplies, food, etc). This is why Vassillis is wrong to blame international creditors. If Greece is currently in a dire situation the responsibility is to be attributed to the governments that have run the country in the past decades, to corporative interests and, ultimately, to Greeks themselves.

The adjustment programmes demanded simultaneous progress on many fronts. But although economic recovery is urgently needed, the country has a limited capacity for reform.

«Finding the right balance between reliance on technical expertise and democratic legitimacy in international financial regulation will be the challenge for the years to come. The European Parliament, which is seeking to bolster its position in the design of Basel standards, might play a role in this endeavour.»