Once we were friends. EU support and reciprocal views between Germany and Italy

The Eurozone crisis and austerity measures are damaging not only public support for the EU but also the stock of mutual trust and respect among European citizens.

Mutual trust among citizens of different member states is a cornerstone for the establishment of a sense of European identity and the strengthening of the EU integration process (Hooghe and Verhaegen 2017). However, the current, multifaceted crisis that the EU is experiencing, in addition to some side effects of the integration process, have not only exacerbated public opposition to the EU, but are also eroding the stock of mutual trust among citizens of different member states accumulated since the end of WWII. In particular, the recent Eurozone crisis has increased the tensions between core countries of Northern Europe, with strong macro-economic performances, and countries of the Southern periphery, struggling with excessive deficit and increasing public debt. Two competing narratives about who is to blame for the crisis are in play. The core countries’ narrative is about feckless Greeks and Italians and the inability of their national institutions to adopt structural reforms to keep their public debt under control and the Euro sustainable. The narrative running in peripheral member states blames Northern countries, and Germany above all, for their austerity measures and their lack of solidarity towards countries facing severe economic and financial difficulties. As Grabbe (2012) pointed out, the sovereign debt crisis is more than the breakdown of a currency and of a political project, it is also causing a loss of trust between EU member states.

By taking Germany and Italy as illustrative examples of this ‘Core-Periphery’ divide, this article aims to investigate the evolution of the respective perceptions these two countries hold of each other, expressed by public opinions and political elites, and its relation with public support for the EU.

Germany and Italy share numerous historical commonalities, such as a late nation-building process and the experience of a Fascist/Nazi regime. Since the end of WWII Germany and Italy have been characterised by a pronounced Europeanism and are both founding members of the EU. Moreover, both have undergone major political changes at the end of the Cold War: the East-West reunification in Germany and the collapse of the traditional party system in Italy.

Italian-German relations are intense and marked by cooperation at the cultural, economic and societal level as well as in daily political life (Diedrichs 2010; Dinger 2013). However, they have been also characterised by longstanding stereotypes and prejudices. Italians appreciate Germans’ efficiency and hardworking ethic but, at the same time, criticise their harsh and uncompassionate nature. Germans in turn admire Italy for its lifestyle, but they consider its institutions inefficient and corrupt (Pew Research Center 2012, 2013; Friedrich Ebert Stiftung 2016).

The REScEU Mass Survey provides evidence of the difference between Germans’ and Italians’ approval levels for financial bailouts and their views about who is to blame for the recent Eurozone crisis.

Interestingly, the EU and the European integration process, which for many years represented the common denominators in bilateral relationships, have become the most challenging source of tensions between Germany and Italy with the outbreak of the Eurozone crisis. This has exacerbated long-lasting stereotypes and created new divisions over the issue of fiscal stability and, ultimately, cross-national solidarity. Germany supports a markedly ‘disciplinarian’ approach, deeply rooted in the Ordoliberal doctrine (Bulmer 2014; Meiers 2015) according to which the burdens of fiscal adjustment should fall exclusively on national governments and taxpayers. On the contrary, Italy asks for more flexibility in the application of rules, the mobilisation of EU resources for investment and growth, and, most importantly, the ‘mutualisation’ of risks (Ferrera 2017).

The REScEU Mass Survey provides evidence of the difference between Germans’ and Italians’ approval levels for financial bailouts and their views about who is to blame for the recent Eurozone crisis. Other recent public opinion surveys, moreover, show that large majorities of Italians believe that Germany has too much influence in European affairs and that Germany is abusing of its role within the EU to the disadvantage of other countries.

Therefore, building on previous research that shows a positive relation between support for the EU and macroeconomic performance (Anderson 1998; Anderson and Kaltenhaler 1996), with the outbreak of the Eurozone crisis we expect to find a sharper decrease in public support for the EU in Italy than in Germany. However, we push our hypothesis a step forward by postulating an association between support for the EU and Italians’ view of Germany. Given the hegemonic role played by Germany within the EU institutions (Paterson 2011; Kundnani 2015) and the repeatedly manifested frustration with austerity measures expressed by Italian political elites, we expect to find evidence for a decline in Italians’ level of trust vis-à-vis Germans in correspondence with their decreasing support for the EU.

Support for the EU and mutual feeling

A vast literature has argued that after the outbreak of the financial crisis the EU and the integration process started to be politicised in the sphere of domestic politics and became increasingly disputed (Hooghe and Marks 2009; Hutter, Grande and Kriesi 2016). In order to estimate Germans’ and Italians’ preferences regarding the EU, we have built a measure of public mood based on several EU-related issues. This measure stems from the concept of policy mood developed by Stimson (1999), which is an aggregate and longitudinal estimation of citizens’ opinions on one or more controversial policy issues. More precisely, we have aggregated frequency distributions of responses to survey questions conducted between 1973 and 2016 that relate to general attitudes towards the EU, gathered from Eurobarometer, PEW Global Attitudes Survey and Transatlantic Trends Survey. 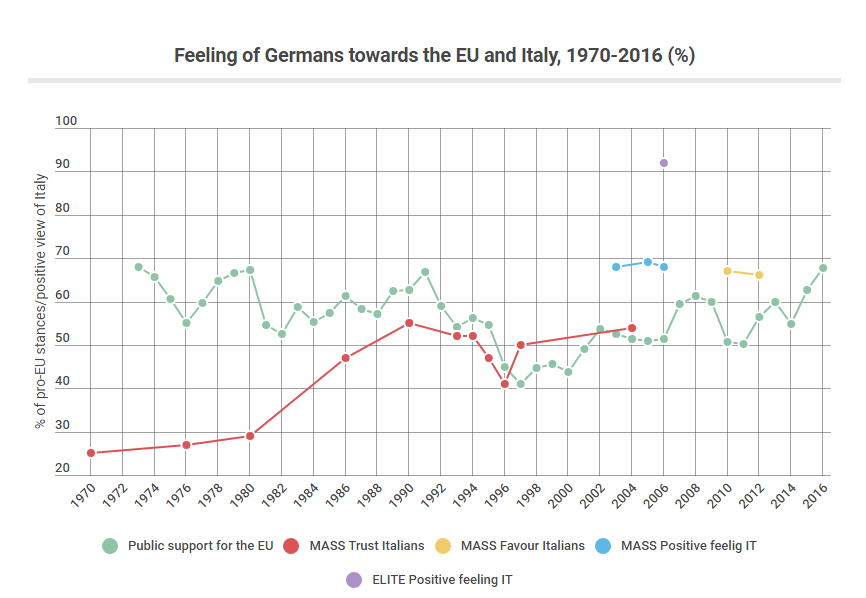 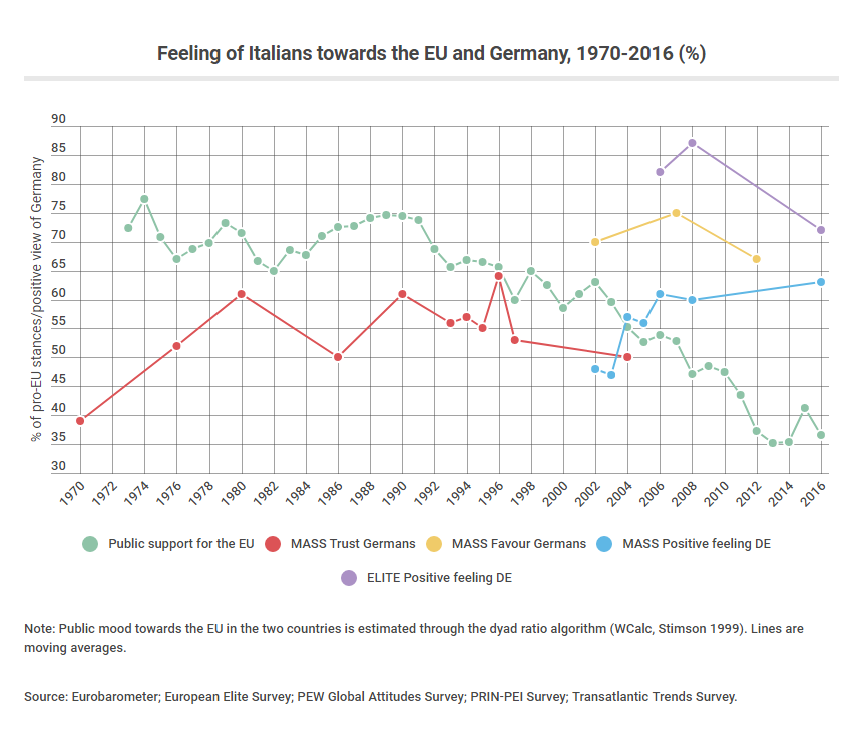 The green lines in the two graphs represent our estimate of the German and Italian publics’ respective attitudes towards the EU. This indicator measures the annual percentage of citizens that express a ‘pro-EU’ stance. The average level of public goodwill towards the EU is quite high in both Germany (65.7%) and Italy (70.0%), confirming the marked Europeanism that has characterised the two countries since the beginning of the EU project. However, Germany and Italy show different patterns of variation over time.

The German public attitude towards the EU remained highly positive and quite constant during the seventies and the eighties. It decreased during the nineties, after the re-unification process and the decision to abandon the Deutschmark, but then increased again to remain high even in recent years. By contrast, and as expected, the Italian mood has relentlessly deteriorated since 1993, following the adoption of the Maastricht Treaty, falling below the 50% threshold after the outbreak of the sovereign debt crisis.

Although we could not rely on a yearly estimate, we have compared the public attitude towards the EU with the reciprocal views of Germans and Italians at the mass and political elite levels. In 1970, the German public’s trust of Italy was very low but it constantly increased until the collapse of Italy’s First Republic. While Germans’ feelings towards Italy were highly positive during the 2000s, the share of German citizens expressing a favourable opinion of Italians slightly decreased with the Eurozone crisis. At least until the outbreak of the economic crisis, Italians maintained a positive view of Germany and its citizens, with only minor oscillations. In line with our expectation, the proportion of Italian respondents expressing a favourable opinion of Germans sharply decreased between 2007 and 2012, when the sovereign debt crisis reached its most dramatic peak in Italy. Regarding the elites, data indicate that both German and Italian parliamentarians expressed a more positive feeling towards the other nation than did the general public. However, between 2008 and 2016 Italian political elites showed a larger downturn in their positive evaluation of Germany than was seen among ordinary citizens.

Building on these findings, we have investigated more deeply which individual factors are associated with the views of Germany expressed by Italian citizens and political representatives. Not surprisingly, the negative association between the perceived effect of the economic crisis and feelings towards Germany is significant only after the outbreak of the economic crisis. Furthermore, the negative evaluation of the influence exerted by Germany within the EU, expressed by sections of the general public and the political elite, is strongly associated with the Italians’ negative feelings towards the country. Finally, as expected, the lower the level of support for the EU expressed by Italian citizens and political elites, the lower their opinion of Germany becomes.

The multiple crises that Europe has recently been experiencing and the policy initiatives implemented by the EU to address them have produced detrimental effects not only on support for the EU and its institutions, but also on the laboriously accumulated capital of respect and mutual trust among national governments and citizens of different member states. In particular, Italian citizens and political elites are likely to equate the EU and its behaviour with Germany’s ‘hegemonic’ role within the EU institutions. This scenario undoubtedly represents a serious challenge to the integration process.

However, recent public opinion surveys show that the EU is re-gaining confidence in the eyes of the citizens and, more interestingly, that there is a broad support, even in core countries such as Germany, for policy initiatives aimed at strengthening pan-EU solidarity in both cross-national and transnational dimensions. A majority of citizens still believes in the EU, provided that the EU changes its course, carrying out solidarity-enhancing measures to reassure voters worried about the negative consequences of the integration process and the recent crises. Our results suggest that European leaders should follow this strategy with due diligence to avoid new losses of intra-European cohesion and the consequential damage to the stability, security and development of the EU community.

A longer version of this article, providing also empirical results, will be published in 2018 in Contemporary Italian Politics with the title “Members Apart: A Mass-Elite Comparison of Mutual Perceptions and Support for the European Union in Germany and Italy”.
This article is the result of a series of data-visualisation inquiries investigating the controversial role of Germany and its leadership among EU citizens.

A longer version of this article, providing also empirical results, will be published in 2018 in Contemporary Italian Politics with the title “Members Apart: A Mass-Elite Comparison of Mutual Perceptions and Support for the European Union in Germany and Italy”.

This article is the result of a series of data-visualisation inquiries investigating the controversial role of Germany and its leadership among EU citizens.

«If we were to judge from Twitter activity, Germany’s political landscape would look much different than the reality»