The term “solidarity” bears in it a notion of stability, strength, and completeness: it refers to some form of solidity. In its present-day use, solidarity can describe an array of feelings, actions and situations sharing one basic idea: they concern a relationship between persons. Given the “solid” connotation of the term, one may add that solidarity generally describes a relationship that is either solid in the temporal or spatial (or some other) sense. These two observations show that solidarity is a profoundly non-individual concept in the sense that one single person cannot experience it without the existence of other persons. However, they are sufficiently vague to allow for the use and misuse of the concept in all sorts of contexts.

Solidarity can be evoked for merely instrumental reasons, it can be called upon in an appeal to one’s morals, or it can be depicted as an act of benevolence – and these are all scenarios that sound all too familiar to observers of EU politics. The way in which, after the financial crisis, the German government and European institutions referred to rescue programmes of countries like Greece as acts of solidarity, for example, should suffice to remember the cynicism with which harsh austerity measures were verbally masked. Moreover, some EU member states have referred to solidarity in the distribution of refugees, attempting to make a desperate call to conscience in circumstances where legal solutions were lacking. Finally, advocates of more EU integration through economic solidarity frequently lure us with promises of economic prosperity and the EU being a stronger global player, availing themselves of a purely instrumental conception of the term. Don’t they? The lack of clarity about what solidarity is, or what those who invoke it mean by it, is not only a problem of politicians but also of some academics who study it.

Emile Durkheim’s theory of solidarity in “The Division of Labor in Society”, published roughly 125 years ago, interestingly describes a phenomenon that is very different from more recent accounts of the term. According to his view, solidarity is equivalent to the aggregate of values, practices and norms that ensure cohesion in society. Solidarity is not a conscious choice to act in a certain way. Instead, it is conditioned by social circumstances, and it is mostly involuntary.

Durkheim argues so in distinguishing two main types of communities: historical societies where no division of labour was present – in other words, in which there was no professional specialisation of individuals – and the type prevailing in the times Durkheim lived in. The individuals within the former kind of societies were so similar that their consciousnesses overlapped in large parts. People upheld mostly the same values and were held together by this sameness. Durkheim called this type of solidarity “mechanical” because each one’s margin for individual action was close to zero and society could only change and act as a whole, mechanically. On the contrary, in highly differentiated societies, he argued, solidarity is not based on sameness but on difference: the division of labour has progressed so much that each individual’s sphere of action has increased, but also the mutual dependence on the other members of society. Like in a human body where all organs have different functions and depend on each other, solidarity in such a society is called “organic”. An example of this type of cohesion in the body was already offered by the Greek poet Aesop, in his fable on the belly, the hands and the feet: one organ fails, the whole organism dies. 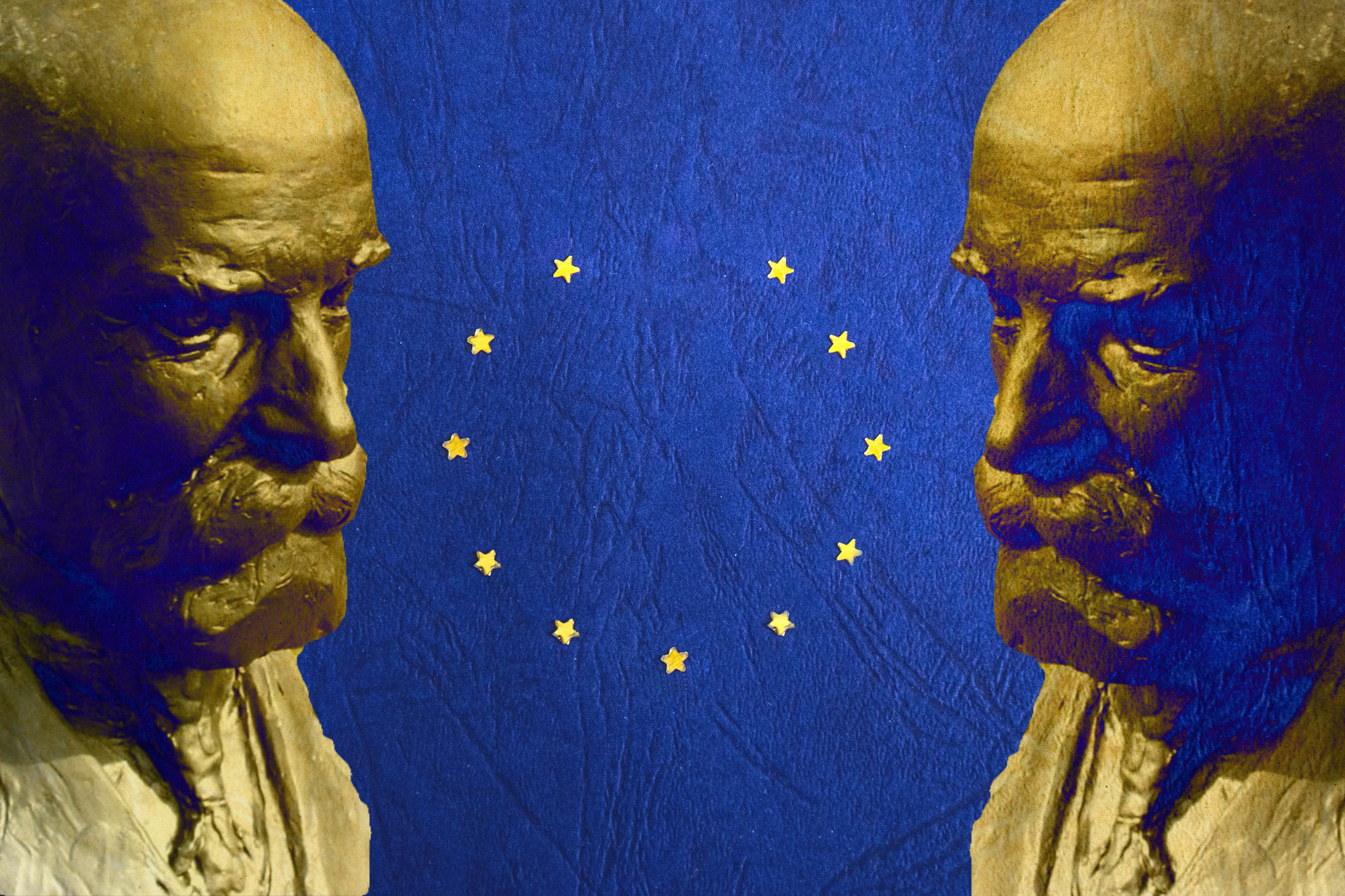 Durkheim’s conception of solidarity leaves little margin for choice: whoever lives in a society with a high division of labour cannot escape the dependency on the other members and therefore is in solidarity with them. Whoever lives in a society with little division of labour will directly share all values and ideas with the other members and therefore not even consider any other way than being in solidarity.

If we attempt a look through Durkheim’s lens at the EU, the argument of overall prosperity brought forward in favour of solidarity nowadays seems plausible. Since the EU member states are so highly specialized economically (and so is the entire world), we as Europeans directly depend on each other and therefore have no choice but to be in solidarity, unless we want to become completely meaningless voices on the global political and economic stage.

But what would Durkheim say about recent political events like Brexit and increasing nationalism in most EU member states? According to his theory, solidarity based on our mutual dependency would simply continue to exist and become more and more “organic” over time. But isn’t exactly the opposite happening at this moment? Can we merely separate the political situation shaped by citizens’ agency from the structural type of society we live in when talking of solidarity?

Solidarity as an active commitment

In giving a structural description of the basis for solidarity, Durkheim leaves little space for political, social and cultural choices and developments to shape solidarity. Rather, his view reminds in this respect of some conceptions of solidarity that have previously been called “pre-political”. These include conceptions of solidarity based on largely involuntary or fixed characteristics such as nationality, gender, ethnicity, or social status. Such conceptions run the risk of excluding outsiders and of offering little normative guidance. Indeed, just because two individuals share the same trait, their common characteristic does not provide any clues about the circumstances and ways in which they should act in solidarity with each other. The same could be said about Durkheim’s view on the structures of society: the division of labour is a tendency that defines societies irrespective of individual choice and action. Thus, his view of solidarity describes a situation that arises prior to any normative considerations. It can be seen not only as “pre-political” but also as “pre-agency”, in the sense that it does not contemplate the agents’ choice and deeds.

In light of such criticism, recent literature mostly adopts a different approach to the conceptualisation of solidarity. Tommie Shelby, for example, suggests in his book “We who are dark” (2005) that people of colour should act in solidarity not based on their common trait of skin colour, but rather based on the shared experience of suffering that most people of colour are familiar with. Avery Kolers writes, in his 2016 book “A moral theory of solidarity”, that those who are confronted with a group in need of solidarity must defer their own opinions of how to alleviate suffering to the will of that solidary group – as a matter of moral duty. Andrea Sangiovanni, in his 2015 essay “Solidarity as joint action”, argues that to be in solidarity with one another, one needs to share a goal of fighting a specific kind of injustice and act towards it. Jürgen Habermas writes specifically about EU solidarity in his 2013 essay “Im Sog der Technokratie – ein Plädoyer für europäische Solidarität” that solidarity is a shared interest (including for one’s own sake) in the integrity of a shared political form of life.

All the four mentioned examples adopt a fundamentally different approach from Durkheim when it comes to the basis of solidarity, namely regarding individual agency. They base solidarity on a shared duty or goal, be it of moral or instrumental nature. They base solidarity on the similarity of collective ideas or duties, not on mutual dependency because of difference. In this sense, they almost sound like agency-centred conceptions of Durkheim’s mechanical solidarity.

However, this observation does not get to the core of the difference between these different views on what solidarity is based on. Unlike Durkheim, the scholars mentioned above make solidarity a matter of some normative concern, whichever shapes it may take. Durkheim describes societal structures, while Shelby et al. assume that solidarity is expressed through action based on considerations about how one should act towards others and why. Despite differing in their views on what these considerations should result in, the four scholars mentioned above share this fundamental characteristic of normativity. Such normative understanding, combined with the assumption that solidarity happens through (political) agency, differs from a descriptive conception of a structure that cannot be changed. However, linking solidarity to agency, and making it dependent on individuals’ actions, opens up the possibility of the lack of solidarity, providing a conception of it that is inevitably less solid than Durkheim thought and descriptively captured.

Now, if we look at the EU through this lens, the crumbling of solidarities that we perceive through the rise of nationalism and anti-EU sentiment find an explanation. It seems that there is a lack of solid solidarity when it comes to the normative framework that should guide EU solidarity.

EU solidarity is in a state of crisis. If we look at it from the structural point of view, as a largely economically interdependent union of states with an advanced division of labour, we gain little insight into why solidarity is not in its best shape. We may argue that economic considerations should make us cooperate with each other, but clearly, it is not sufficient to say that we need to do so out of pure economic necessity. This kind of rhetoric based on the Thatcherian “there is no alternative” has not exactly led to sympathies with the European project of increased integration.

On the other hand, a robust normative framework for solidarity in the EU is missing. If we understand EU solidarity not as a structural observation but as a matter of political and ideological commitment and action, it is evident that there is a strong need for a convincing normative stance. Only this could provide a solid basis for solidarity in the EU, one in which there is space for choice, opinion, and change, but also a strong tie to values and duties that arise out of them. Such a normative, agency-centred conception of EU solidarity would need to provide stability through focusing on sameness in political ideals rather than on difference in structural terms.

There is no doubt that we live in highly specialised societies. The political problems that we deal with are however quite similar. So maybe a starting point to better understand an appropriate conception of solidarity for the EU could be the idea of a “mechanical” attitude in the Durkheimian sense. However, conviction to be part of a joint political project, rather than fear of suffering alone, should be the guiding principle of solidarity in the EU.