Attitudes towards inter-state solidarity in the EU can be explained by nationality and political leaning. Preferences for a more social Europe, conversely, are more widespread.

On 20 March the Frankfurter Allgemeine Zeitung published an interview with the President of the Eurogroup, Jeroen Dijsselbloem, wherein he said that if countries spent all their money on women and alcohol, he would not grant them financial support. Dijsselbloem’s words raised a public outcry all over Europe and in particular in southern member states.

Although partially misinterpreted and exaggerated by the media, Dijsselbloem’s statement highlights quite clearly a north–south divide within the EU that has to do with the issue of fiscal stability and, ultimately, cross-national transfers. This line of tension, which exploded with the outbreak of the sovereign debt crisis, separates core and peripheral member states, and is rooted in both economic interests and highly entrenched cultural worldviews. Creditor member states (Germany in the first place) support a markedly disciplinarian approach according to which domestic fiscal imbalances reflect bad policy choices in the past; thus, the burdens of adjustment should fall on national governments and taxpayers (the “homework” rhetoric). Debtor countries instead oppose European Monetary Union (EMU) austerity policies and ask for more flexibility in the application of rules, for the mobilization of EU resources to support investments and growth, and for the mutualization of some common risks (see Ferrera 2016, 2017).

The core–periphery divide has received increasing scholarly attention since the first Greek bailout crisis. A vibrant academic debate has discussed the roots of this conflict (Bagus 2010; Matthijs 2016) and its increasing political saliency (Matthijs and Blyth 2015; Streeck and Schafer 2013). An extensive literature also focuses on the consequences of austerity policies on public support and the legitimacy of both the EU (Fatherstone 2016; Schmidt 2013) and the representative democracy in peripheral member states (Armingeon and Gutthman 2014; Jones and Matthijs 2017). Alongside the diagnosis of the problem, scholars have also identified potential ways out of it (Chalmers, Jachtenfuchs and Joerges 2016; Ferrera 2014, 2017).

Nevertheless, do we find evidence of a core–periphery divide in European public opinion? How do citizens of different EU member states react to austerity and the conditionality logic that accompanies financial assistance to indebted countries? One of the major concerns of experts and scholars is that the increasing inequality between EU member states is not only challenging public support toward the EU institution (see Matthijs 2017), but also squandering the laboriously accumulated capital of respect, trust, mutual sympathy among EU governments and especially among citizens of different nationalities. Preliminary evidence of it can be found in recent public opinion surveys conducted by the PEW Research Centre (2012 and 2013), the Bertelsmann Foundation (2015) and the Friedrich Ebert Foundation (2016).

How altruistic are EU citizens?

Compared to these investigations, the REScEU public opinion survey has the advantage of including specific questions aimed at assessing citizens’ attitudes toward the availability of transfers from richer countries to those facing severe financial difficulties. Infographic #2 of the REScEU mass survey series already shows results of a question that asked respondents to choose among six different response categories referring to how the financial support from the EU should be provided. Answers ranged from a virtually unconditional availability of transfers in the name of European solidarity to their complete unavailability. A plurality of respondents (36.5%) chose the “conditionality” option (in essence, the current status quo), meaning that transfers should be bound to specific domestic structural reforms. However, an almost equal percentage of respondents (35.3%) opted for an answer linked to inter-state solidarity, where the reform condition is partially or completely relaxed. Instead, 22.3% indicated that transfers should not be provided at all or, at most, should be offered voluntarily only by those countries that consider it to be in their national interest. Finally, 6% of respondents thought that providing financial help to highly indebted member states should not be a task of the EU.

The mere fact of being a German respondent decreases the predicted probability of opting for inter-state solidarity compared to other nationalities, in particular Italian and Spanish. However, it is important to highlight that this lower propensity for solidarity in Germany does not favour a higher propensity for self-help.

Country variations are particularly important to finding evidence of a north–south divide. As expected, looking at German respondents only, we found the “conditionality” category (44.5%) to be a prominent one, whereas the “solidarity” category (26.5%) was lowest compared to the other member states. Conversely, Italy and Spain, display the highest percentages of respondents that opted for the “solidaristic” options (46.6% in Italy and 41.2% in Spain) and the lowest percentages of respondents in the “self-help” category (16.1% in Italy and 15.4% in Spain). Poland (31.1%) and Sweden (24%), two countries that are not EMU members, feature the highest number of respondents in the “self-help” category.

A multivariate regression model aimed to assess which factors predict the probability that a respondent choose a specific response category compared to the others confirms these country-level differences (Figure 1). Controlling for several socio-demographic and political features of individuals, the mere fact of being a German respondent decreases the predicted probability of opting for inter-state solidarity compared to other nationalities, in particular Italian and Spanish. However, it is important to highlight that this lower propensity for solidarity in Germany does not favour a higher propensity for self-help. The predicted probability of a self-help option for German respondents is not significantly higher than that of Italians and Spaniards. On the contrary, Germany is associated with the highest predicted probability of conditionality in the sample.

Irrespective of the nationality and controlling for other individual-level factors, being placed on the left side of the traditional left–right scale significantly increases the predicted probability of choosing inter-state solidarity.

This result largely reflects key traits of Germany’s political culture, rooted in the Protestant tradition and more specifically the “Ordoliberal” doctrine that predominates among German political and economic elites, and which strongly affects the austerity measures implemented at the EU level. Answers respondents gave to other questions presented in the Infographic #2 of the REScEU mass survey series provide further evidence of the presence of a core–periphery divide. While 33% of German respondents blamed the most indebted countries of the EU for the euro crisis, only 7% of Italians did so. On the other hand, the latter largely criticized the wealthiest countries (29%), an option that was hardly picked up by Germans (8.5%). Moreover, while only 37% of respondents in Germany are in favour of Eurobonds, in Italy and Spain debt mutualization is supported by 72% and 78% of respondents respectively. 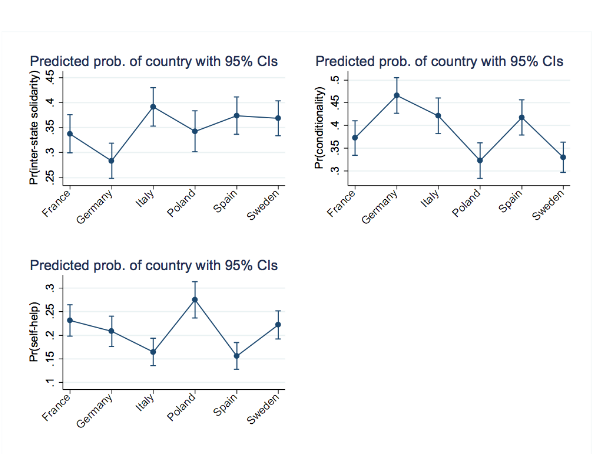 However, country differences explain only part of the variance in the respondents’ availability of transfers. Of course, since data are gathered at the individual level, respondents’ characteristics, preferences, attitudes and choices represent the lion’s share in predicting the probability of opting for solidarity, conditionality or self-help. Here we focus on respondents’ political preferences and electoral choices. Substantial recent literature (Mudde 2004; Szczerbiak and Taggart 2008) has argued that Eurosceptic parties contributed to politicizing the issue of inter-state solidarity, generating a burst of centrifugation in partisan competition in both northern and southern EU members states. Graphs presented in Figure 2 clearly show that, irrespective of the nationality and controlling for other individual-level factors, being placed on the left side of the traditional left–right scale significantly increases the predicted probability of choosing inter-state solidarity. By comparison, being on the right increases the probability of being inclined toward self-help and the full national responsibility of indebted countries. No significant differences emerge in predicting preferences for the status quo. 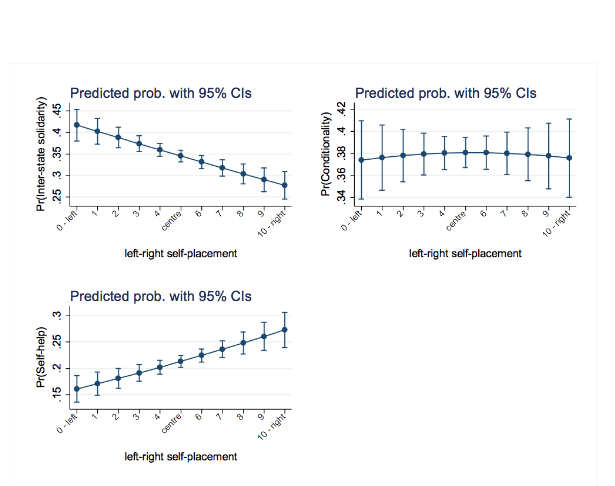 A third series of graphs (Figure 3) highlight that voting choices respondents made in the last national election also play a role in predicting preferences for the availability of financial assistance. The predicted probability for inter-state solidarity increases among respondents who voted for a radical left party compared to all other party families (centre-left, centre, centre-right and radical right). On the contrary, having voted for a radical right party significantly increases the probability of refusing solidarity in favour of a self-help approach for most indebted states. Interestingly, voting choices in favour of traditional political forces of the centre-left and centre-right significantly increase the predicted probability of being inclined towards the conditionality logic that currently guides financial assistance within the EU.

Very large majorities in our sample support different kinds of policies and initiatives aimed at building a stronger social union. 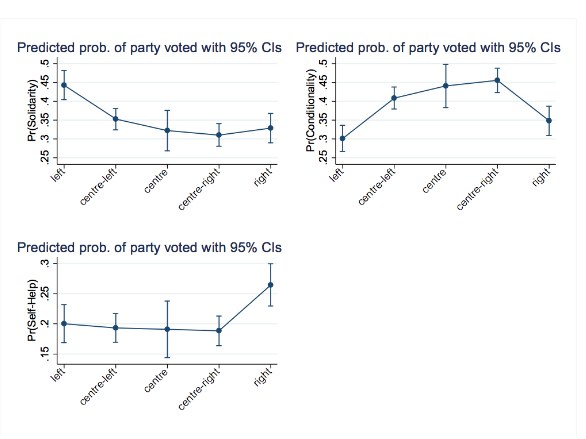 Social Europe as an answer

Which possible solutions can the EU institutions adopt to turn the tide indicated by Eurosceptic political forces? This complex aspect goes beyond the scope of this focus. However, infographic #4 of the REScEU mass survey shows that very large majorities in our sample support different kinds of policies and initiatives aimed at building a stronger social union. In particular, these measures refer to the provision of basic means of subsistence for the citizens of those states that are facing severe financial difficulties (89%), the introduction of an EU-funded benefit scheme for people in severe poverty all over the Union (76%) and the provision of financial help for member states facing a sudden rise in unemployment rates (77%).

More importantly, broad support for these social policies can be found not only in peripheral EU member states (e.g. Italy and Spain), but also in core countries such as Germany and Sweden, where more than two respondents out of three are in favour of these initiatives. Furthermore, even respondents who placed themselves on the right side of the ideological spectrum and declared to have voted for a Eurosceptic party are willing to support social policies at the EU level. Future electoral rounds around the continent, starting from the next French presidential elections, will show us whether there will be political leaders willing and able to capitalize on this pro-(social)Europe bedrock.

«For the MFF 2021–2027, Member States have decided not to increase the EU budget, despite the adverse consequences that the Great Recession had on many European territories. As a consequence, cohesion policy, in 2021–2027, will be too small a blanket to cater to the needs of two distinct peripheries adequately.»