The Dutch general election of March 15 was described as a litmus test for Eurosceptic forces in Europe, after last year’s Brexit vote and a few weeks ahead of the French presidential election.

Eventually, centre-right Prime Minister Mark Rutte won against anti-Islam and anti-EU Geert Wilders, and this victory has been welcomed with relief from other EU governments facing the wave of populism and nationalism.

The campaign for the Dutch elections was followed Europe-wide, with a notable involvement on the part of media and citizens from other EU member states. On March 6-17, we followed Twitter conversations including either the term “Dutch elections” or the related hashtag #dutchelections, collecting a sample of 156,605 tweets. As we wanted to focus on the European debate, we used a location detection algorithm to identify tweets sent from European countries. This brought us to a sub-sample of 55,709 tweets. Figure 1 shows the temporal distribution of such tweets.

As typical of Twitter topical conversations, the distribution of tweets over time is non-linear, and peaks immediately after the election day. 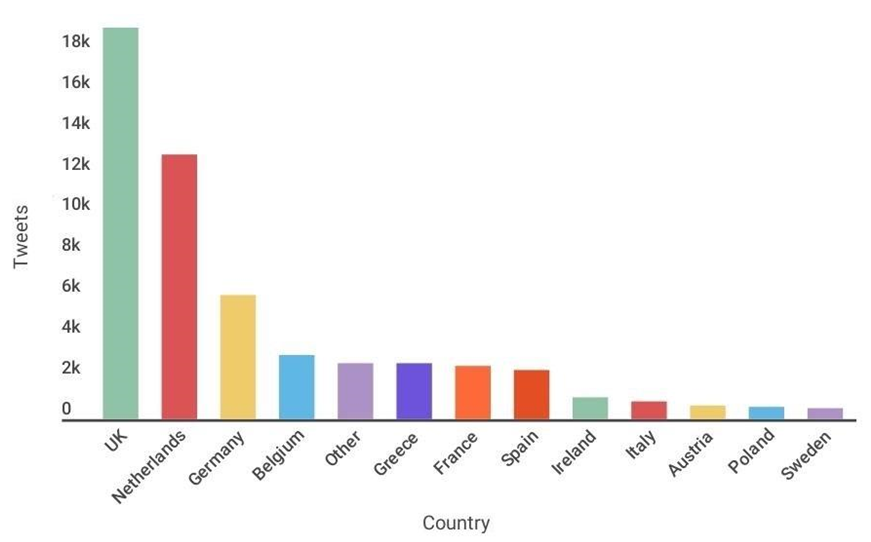 Figure 2: Country distribution of Tweets on the 2017 Dutch election

In our previous focus on Italy’s constitutional referendum we suggested the existence of an embryonal trans-European community of users who discuss EU-related topics online regardless of country of origin, refer to international media outlets, and adopt the English language as a lingua franca.

The same pro-European community emerges, with renewed intensity, from the debate on the Dutch election.

The same pro-European community emerges, with renewed intensity, from the debate on the Dutch election. First, whereas four out of five tweets in our dataset are in English, only 34.5% of the sample are sent from the United Kingdom. Second, by analyzing the most retweeted contents we can see how a single tweet can spread across different countries. It is the case, for example, of the tweet by Julius Van de Laar (below), a Berlin-based political consultant, which was retweeted over 3,500 times from users from all 27 European countries in the aftermath of the election. 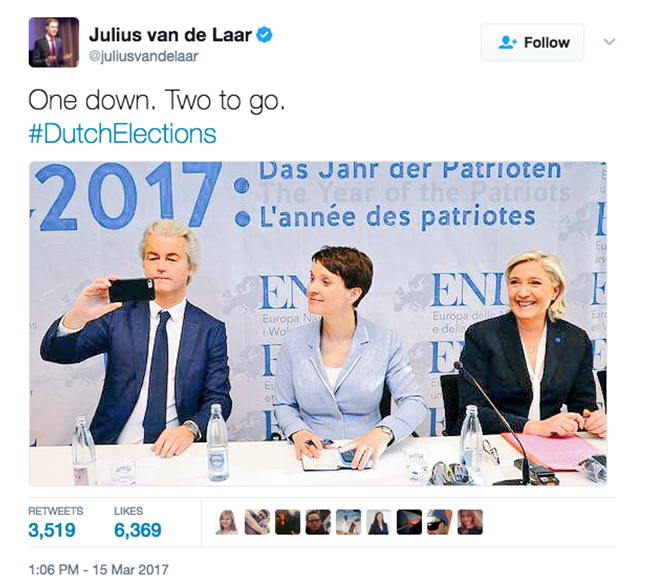 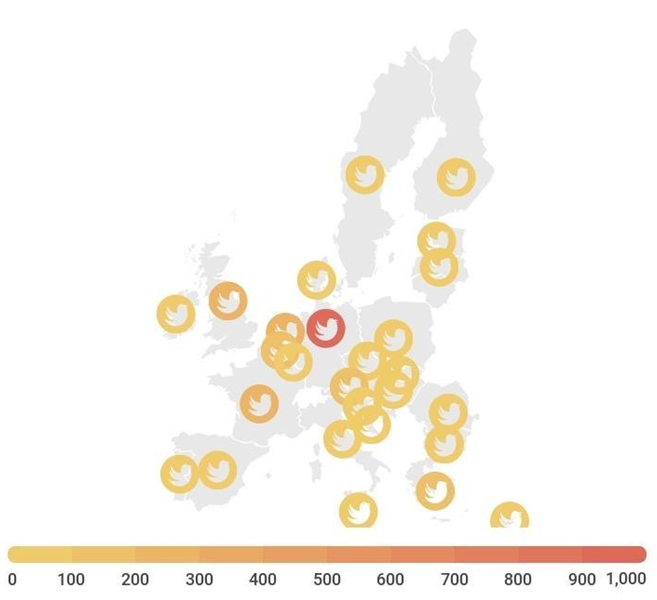 Last but not least, if we look at the Dutch election’s retweet network we can see how the main influencers are European journalists, media outlets and intellectuals sharing pro-European views. In the network represented below, each user represents a node, and the size of the node is proportional to the popularity (in terms of retweets by other users) of users’ tweets. Labels highlight the main hubs—that is, the authors of tweets that were retweeted the most. Different colours indicate different clusters in the network – that is, groups of users that interact more closely with each other, as calculated by Gephi’s community detection algorithm. As we can see from Figure 4, the vast majority of users who tweeted about the elections are grouped in a single big region—the light blue cluster in the graph—, retweeting tweets from the aforementioned ‘mainstream’ European influencers (such as the political consultant @juliusvandelaar, the journalist and writer @rcbregman and the European psephological platform @europeelects) 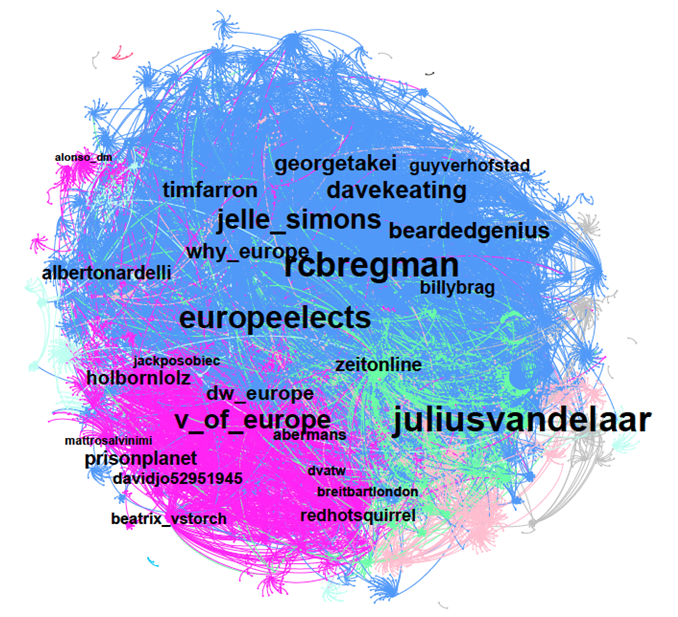 Ironically, such a (pro-)European community is placed side by side with another transnational European community—in lilac in the graph—namely that of European Eurosceptics, whose most prominent user is the anti-European news account Voice of Europe.