Much of the EU debate is structured around some key lines of conflict in the European public sphere. Here, we want to focus on the line, separating the “core” from the “peripheral” areas in the EU. To simplify, the latter asks for interstate solidarity to overcome economic crises, while the former rejects that principle, calling instead for the self-responsibility of every member state.

To investigate the impact of this divide on public opinion, we have decided to look at online reactions to two different events that occurred on the same day and both of which are representative of the core versus periphery divide. The first one is the March 20 Eurogroup, which we have already addressed in detail in a recent analysis. This meeting was centred on Greece’s bailout negotiations and it resulted in a lack of an agreement between Greek government and EU authorities over the reforms that the country should implement in order to obtain new bailout funds. The other event that we considered is the interview that was released by the head of the Eurogroup, Jeroen Dijsselbloem, to the Frankfurter Allgemeine Zeitung, also March 20. In this interview, the Dutch Finance minister compared Southern EU countries hit by crisis to men who “spend all the money on drinks and women and then ask for help”, accusing them of asking the EU for solidarity but not respecting the rules on public debt and deficit.

Figure 1 shows the country distribution of the two sets of tweets generated by “Eurogroup” and “Dijsselbloem”. What emerges is that the absolute majority of tweets containing the word Eurogroup were located in Greece (63.79%) while in the Dijsselbloem sample the highest share of conversations originated from Spain (26.7%), followed by the Netherlands (14.60%) and Portugal (12.34%). 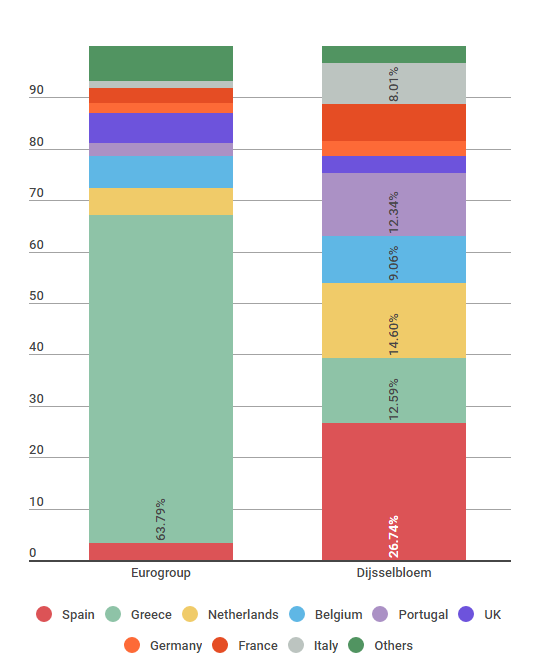 Figure 1: Distribution of “Eurogroup” and “Dijsselbloem” tweets by country

The results are similar if we compare the distribution of tweets by language, as shown in Figure 2. 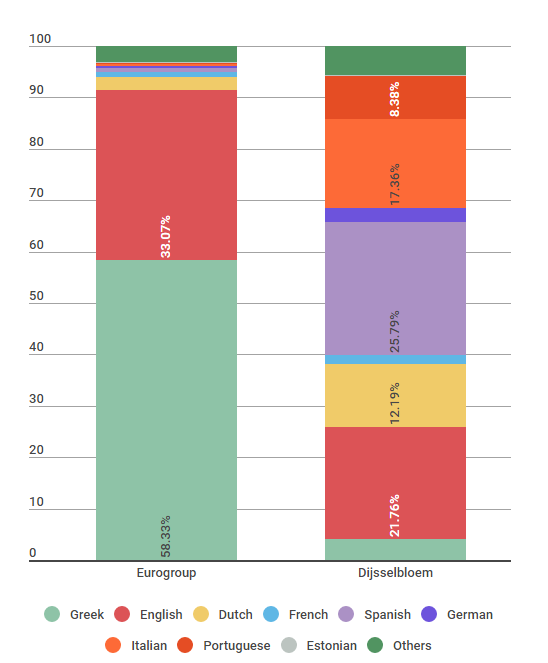 Figure 2: Distribution of “Eurogroup” and “Dijsselbloem” tweets by language

In the Eurogroup collection, the high incidence of Greek tweets is most probably due to the negative reactions of Greek users to the lack of an agreement between their government and EU authorities over the country’s economic adjustment programme, which resulted from the 20 March Eurogroup. In the Dijsselbloem collection, the high incidence of tweets located in Spain, Greece, Portugal, Italy—all countries that were severely affected by the economic crisis—in addition to the Netherlands, is probably due to the users’ reactions to Dijsselbloem’s declarations about southern EU countries. Indeed, in the days after Dijsselboem’s declarations, angry reactions emerged from both politicians and public opinion in southern EU countries.

To better investigate the potential relevance of our collections’ results, we compared both collections to the distribution of general Twitter conversation across countries, which we estimated through a random sample of tweets collected in comparable conditions. The results are shown in Figure 3. 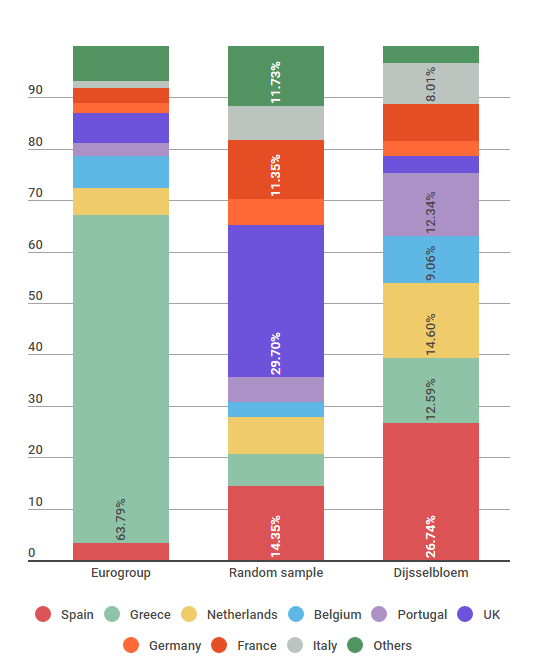 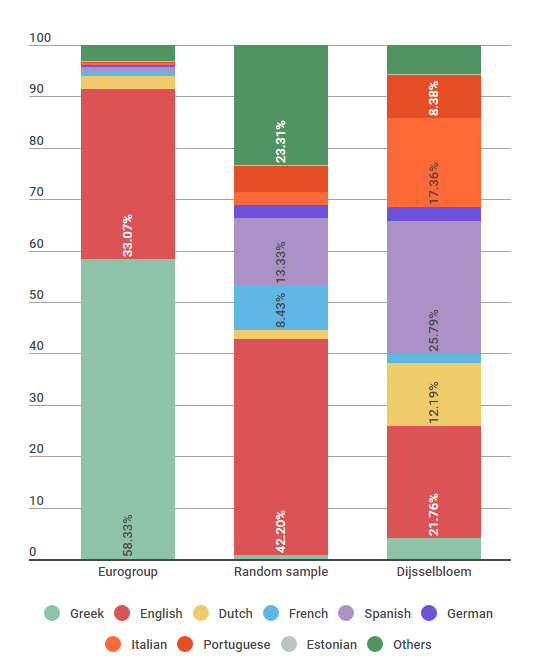 The results of this comparative exercise resonate with the idea of a “core-periphery” line of tension which structures much of the debate on European matters. However, a distinction should be drawn between the two cases because the two episodes highlight different kinds of online behaviour.

Southern EU countries’ online reactions to the “core vs periphery” issues can change a lot, depending on how concrete the investigated event is and whether or not it has spread in the public sphere of a certain country.

First, online reactions to Dijsselbloem’s claim are more fragmented than conversations about the Eurogroup, which are monopoliszed by an overwhelming majority of Greek tweets. This is probably due to the fact that in the Eurogroup case, Greece is involved directly and concretely by the event—the lack of a bailout agreement—while other southern EU countries, who were less touched by the event, did not tweet about it (e.g. in the Eurogroup collection, only 3.25% of the tweets are located in Spain). The Dijsselbloem case is centred on declarations affecting all the southern EU countries at the same time: the reactions are equally distributed between the so-called periphery countries. This could lead us to conclude that southern EU countries’ online reactions to the “core vs periphery” issues can change a lot, depending on how concrete the investigated event is and whether or not it has spread in the public sphere of a certain country. The level of involvement that people would feel to a certain event depends on how much that country’s media and institutions discuss that event.

The second point to highlight is that while the periphery side of the divide is well represented in both collections by many southern EU countries, the “core” side seems to be missing. Considering that Germany is usually considered the main core country, we can see that the share of German tweets is lower than expected in both collections and distributions: both by language (Eurogroup 0.50%, Dijsselbloem 2.78%) and by country (Eurogroup 2.00%, Dijsselbloem 2.88%). The result still holds when comparing Germany’s reaction in the two cases to the one random conversation sample. This could make us conclude that when it comes to the core versus periphery debate, core countries apparently feel less involved and react lazily on Twitter, leaving the online debate to the periphery.