Since 1988, cohesion policy has contributed to give visibility to the EU. “No one falls in love with a market”, was Jacques Delors’s frequent admonishment in the late eighties. His fear was that, if Europe was only to be a free trade area, the average citizen would perceive its construction as elitist. Cohesion policy, then, was conceived as the benevolent face of the EU; the instrument that would be used to improve EU citizens’ chances of living in the new Single Market. The policy operated by providing every region with sound baseline conditions that would allow them to compete within the Single Market. Implicit was the necessary redistribution that the EU budget would operate between wealthier and poorer Member States. The policy in itself can be regarded as an institutional success: throughout the years, its increasing budget (Figure 1) has contributed to create convergence among the EU territories.

Political conditionality has been used to stave off some pressure by allowing stronger control on the policy. This in turn has allowed the policy to grow to be a successful institution. Was this a good deal or there are sunken costs whose consequences are still to unravel?

At the same time, however, the financial burden has contributed to create a political divide between net contributing and net receiving Member States. As the “jackpot” increased, the necessity to safeguard the policy from misexpenditures or alleged frauds has increased as well. Political conditionality, then, has been used to stave off some pressure by allowing stronger control on the policy. This in turn has allowed the policy to grow to be a successful institution. Was this a good deal or there are sunken costs whose consequences are still to unravel? In this article I will look at how cohesion policy conditionality has evolved, both from a quantitative and a qualitative standpoint, and at its significance in the relations between Member States.

Political conditionality can be defined as “the use of pressure, by the donor, in terms of not giving, threatening to terminate aid, or actually terminating or reducing it, if conditions are not met by the recipient.” From this definition two distinct aspects can be extracted. The first one whether if the conditions apply before (ex ante) or after (ex post) the relationship starts. The second is whether if the leverage mechanism that undergird the conditionality is based on positive or negative incentives. Hence, four types of political conditionality can be identified (Table 1).

If we take a look at the number of provisions enclosed in the cohesion policy regulations (Table 2), we can sense how the legal framework has become increasingly complex throughout successive reforms. But it is when these legal provisions are analysed in the light of the political conditionality typology that we can observe something interesting.

The same held true when the policy was firstly reformed in 1993 (Table 4). However, when the cohesion fund was created a year later, a new, qualitatively different, ex post negative conditionality was introduced. This was based on the entente established during the Maastricht negotiations between net recipients and net contributors: the latter (at the time Spain, Portugal, Greece and Ireland) would benefit from the fund in exchange of the guarantee that they would keep their public deficit under control. Under any breach of this condition the Commission could have the fund suspended in accordance with the EU Council.

With the 1999 reform (Table 5) an ex-post positive conditionality, the so called “performance reserve” was firstly introduced. The Member States were asked to save part of the funding to reward the regions which performed the best so to incentivise efficiency. 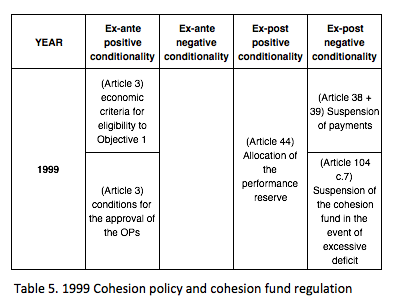 This measure, however, created strong tensions that eventually led to its discontinuation when the policy was reformed again in 2006 (Table 6). Notwithstanding this, the strive for the EU to gain a stronger clout on the policy was heightened by the eastern enlargement and the consequent increase in the cohesion policy budget—and the burden on the net contributors. Two new ex posts negative conditionality provisions resulted: on the one hand, Article 93 contained the N+2 rule, which consisted in the possibility to withdraw the funds if those were not spent within a given number of years. This provision targeted the fear that the newer Member States would have the sort of low absorption issues that had troubled southern Europe. On the other hand Article 98 allowed the Commission to require corrections at the Operational Programmes already approved, thus widening the scope for political control on the implementation phase.

A Member State can have its funds suspended if it is not compliant with the conditions of “sound economic governance.” One of the reasons why this article was harshly criticised was that, if implemented, regions would pay for the fiscal sins of the relative central government. 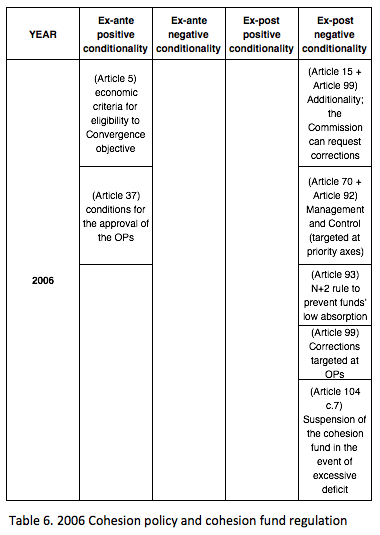 The latest reform round (Table 7) largely coincided with the acute phase of the sovereign debt crisis, and it shows: the conditionality provisions expanded in both numbers and types. First, the performance reserve was reintroduced (Article 20). Second, whereas until then the low absorption problem was only targeted via an ex post negative conditionality, starting from 2014 a new ex-ante conditionality was introduced. Under Article 19, the Commission can require the eligible regions or the states to implement institutional reforms in order to receive financial assistance. For what concerns ex-ante positive conditionality, the funds are now fully part of the European Strategy “EU 2020” and employed to carry out the substantive objectives of the reform. 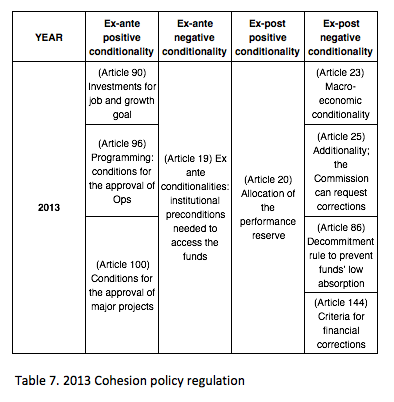 Last, but arguably the most controversial item in the whole reform, is the introduction of macro-economic conditionality under Article 23. According to this provision a Member State can have its funds suspended if it is not compliant with the conditions of “sound economic governance.” One of the reasons why this article was harshly criticised was that, if implemented, regions would pay for the fiscal sins of the relative central government. This discrepancy can be best understood when considering the institutional phylogenesis of this provision: simply put, the existing ex-post negative conditionality applied to the cohesion fund was extended to the whole cohesion policy. However the recipients of the cohesion fund were states and not regions, hence the emerging controversy when the same provision was extended.

A close look has revealed how cohesion policy, throughout the successive reforms, has been subjected to an ever-increasing political conditionality. This process was not devoid of tensions, as the heated argument about both the performance reserve and the macro-economic conditionality shows. One of the main objectives of the original cohesion policy was to create similar starting conditions for regions and, therefore, member states. Nonetheless, the increasing conditionality has created the conditions to sanction long-lasting political inequalities among them, by encircling the economic disparities resulting from historical processes with an increasing moral connotation.