After two decades of democratic consolidation, post-socialist Central Europe is experiencing a widespread crisis in democracy, leading to an overt crisis of democracy in Hungary and Poland and subtler deterioration elsewhere.

The symptoms of deconsolidation

As 2014-16 marked 25 years since the fall of the Berlin Wall and the dissolution of both Yugoslavia and the Soviet Union, it was a time to produce balance sheets for the post-socialist countries that trod the path to greater individual freedom and prosperity. Global inequality expert Branko Milanovi? compiled such a scorecard. Milanovi?’s measure of success, which combined convergence towards OECD-level per capita wealth and a fully consolidated democracy, yielded only two results as unambiguously successful countries: Estonia and Poland. Had the piece to be written today, after the Kaczy?ski clan’s takeover in Poland, only small Estonia would qualify.

A growing literature is emerging in political science aiming to explain the phenomenon of democratic deconsolidation in CEE. Béla Greskovits distinguishes between two dangers befalling democracies in the region—“hollowing”, that is declining popular involvement in democracy—and “backsliding”, which denotes a reversion to semi-authoritarian practices.

The many mass protests against political corruption in the past few years demonstrate that the democratic credentials of post-socialist Europe are far from spotless, and that an altogether different beast, democratic backsliding, is lurking around the corner.

That Europe’s post-socialist countries, beset by weak civil society and disenchanted populations, were born democratically hollow is beyond doubt. On the vast majority of indicators, they score worse than their Western counterparts. Looking at the IDEA Voter Turnout Database, for example, the average turnout at the latest parliamentary elections was 72.7% in the EU-15 and only 55% in the CEE-11. The engagement of civil society is equally shallow: while the latest average union density was in the EU-15 was about 34.4%, it was only 15.2% in the CEE-11 (only in Croatia and Slovenia is unionization above one fifth of the workers). In absolute terms, the number of party members on total voters has dramatically declined across Europe. Van Biezen, Mair and Poguntke show that in the late 2000s this ratio fell to approximately 3% in post-socialist Europe.

As regards public opinion, the Spring 2016 Eurobarometer survey unambiguously reveals the disenchantment of CEE electorates. While the average satisfaction of EU-15 citizens with democracy was 60.6% (ranging from 88% in Denmark to 17% in Greece), it was a measly 39.4% in CEE, where only in the Czech Republic, Estonia, Latvia and Poland (despite a huge slide since 2015) did a majority of those surveyed declare themselves satisfied. The many mass protests against political corruption in the past few years demonstrate that the democratic credentials of post-socialist Europe are far from spotless, and that an altogether different beast, democratic backsliding, is lurking around the corner.

Democratic backsliding is democratic hollowing’s nastier follow-up: instead of denoting a crisis in democracy, it indicates a crisis of democracy. Backsliding often implies the radicalization of sizeable groups within the politically active population, and the partial rejection of democratic principles by political elites.

The problem with backsliding is, however, that it is not limited to such coups de théâtre. Democratic erosion is a subtler but pervasive phenomenon that affects different societal aspects, such as judicial and media independence, the electoral process, public procurement and so on.

The two CEE countries that are most often quoted as prime examples of backsliding are Hungary and Poland. Yet, they should be treated as exceptions (or, better, as a stern warning), rather than the rule. They both show, as aptly argued by Martin Brusis, that when populists or anti-establishment parties come to power, they have a limited number of options. Either they renege on their irresponsible promises and risk being outmanoeuvred by other populist parties, or they fulfil them, resulting in failure sanctioned by the financial markets, EU institutions and, ultimately, voters. A third option is instead to combine policies responsive to the electorates with measures to constrain public scrutiny and political competition. That the Alliance of Young Democrats (Fidesz) in Hungary removed all democratic checks and balances through a rewritten Constitution, and that Law and Justice (PiS) in Poland limited the Constitutional Tribunal’s authority and placed the public prosecutor’s office and public television under governmental control, are clear examples of such a semi-authoritarian drift.

The problem with backsliding is, however, that it is not limited to such coups de théâtre. Democratic erosion is a subtler but pervasive phenomenon that affects different societal aspects, such as judicial and media independence, the electoral process, public procurement and so on. Freedom House’s “Nations in Transit 2016” report bears a subheading that tells it all: “Europe and Eurasia Brace for Impact”. Driven by Hungary’s rapid, as well as Poland and Slovenia’s gradual deterioration, the average Democracy Score for CEE has declined 12% from its peak in 2006. The Sustainable Governance Indicators (SGI) of the Bertelmann Stiftung tell a similar story: Croatia and Slovenia registered small improvements in 2014-16, Bulgaria, Estonia, Lithuania and Poland held fast, while the Czech Republic, Latvia, Romania and Slovakia underwent decline. Hungary experienced the largest backsliding among the EU-28 plus other 13 OECD countries. In line with the hollowing indicators, the EU-15 countries’ average quality of democracy score was 7.8, against 6.8 in the CEE-11.

The explanation for such malaise is to be found in the “anchors of democracy”, which are defined by Italian political scientist Leonardo Morlino as those institutions performing a hooking-and-binding effect on society, with the result of consolidating a political system. The literature agrees that two such democratic anchors—political parties’ representativeness and responsiveness, and the EU as guarantor of economic development and political stability—have given way in post-socialist Europe, thereby contributing to its democratic deconsolidation.

Beyond providing rules and procedures, which constitute only the formal backbone of CEE democracies, the EU has had little success in curbing corruption and has almost no effective tools at disposal to supplant corporate or party state capture where it undermines the quality of political competition.

The region’s EU problem is twofold. First, and similarly to Western Europe, the economic constraints implicitly (e.g. through the European Semester) or explicitly (mainly via Memoranda of Understanding with Hungary, Latvia and Romania) hoisted by European institutions on the region have created severe input and output legitimacy problems. According to Fritz Scharpf, in the input dimension a policymaker is held accountable for policy choices that are in conflict with the politically salient preferences of their constituents. The austerity imposed on CEE has constrained the economic options for incumbent parties to the extent that populist movements have begun to thrive, forcing mainstream politicians to adopt nationalist, anti-capitalist and anti-European rhetoric and policies as a result. In the output dimension, governments are sanctioned if the outcomes attributed to government policy violate the concerns of the electorate. In the majority of CEE countries incumbent governments have been prematurely ousted as an effect of the crisis, leading to policy paralysis and ineffectiveness.

Second, as Rachel Epstein and Wade Jacoby argue, if the EU’s influence in the economic sphere is demonstrable (if not always desirable), its power is barely discernible with respect to the region’s political evolution since the 2004-07 Eastern EU enlargement. Beyond providing rules and procedures, which constitute only the formal backbone of CEE democracies, the EU has had little success in curbing corruption and has almost no effective tools at disposal to supplant corporate or party state capture where it undermines the quality of political competition.

As shown by the Corruption Perception Index (CPI) of Transparency International, Western and Eastern Europe are poles apart. In 2015, the average CPI for the EU-15 was 74 out of 100, with great disparities (Denmark at the top with 91 and Italy at the bottom with 44), while for the CEE-11 it was only 60, with greater homogeneity (the highest-ranked Estonia barely touched the 70 mark). Even though in some countries (such as Croatia, Poland and Romania) the situation has improved over the past 15 years, the general trend is one of stagnation or even backsliding (primarily in Bulgaria, Hungary and Slovenia). 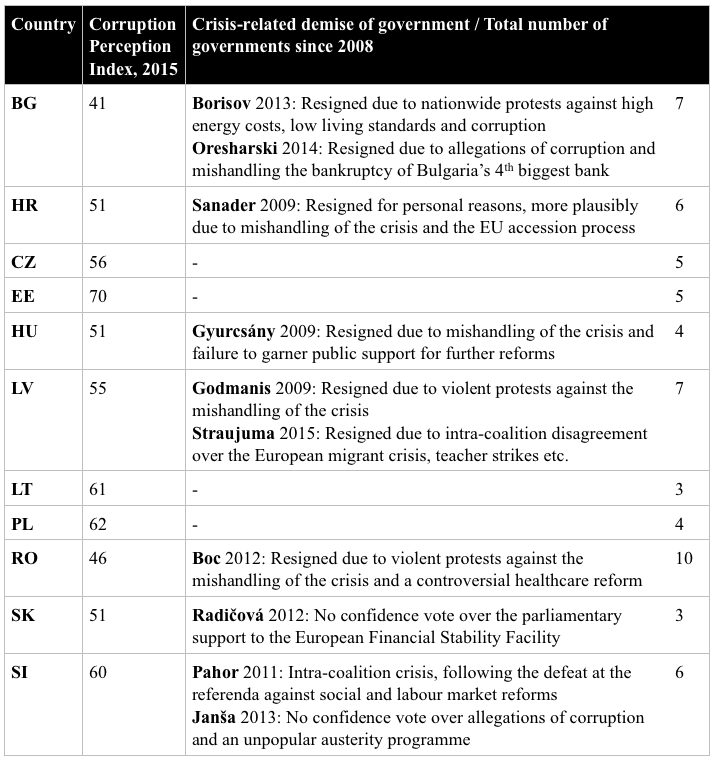 Most worryingly, according to Abby Innes, CEE has witnessed the birth and rise of corporate brokerage party systems. These fester in democratically hollow environments, where parties are fragmented, voters volatile, regulation weak, while businesses is powerful and organized. Here, as Innes notes,

[t]he exchanges most vulnerable to particularistic behaviour are consequently between the political executive and business corporations rather than between parties and civil society (e.g., patronage as electoral resource) or parties and the state (e.g., patronage as a party-organisational resource). Privatisation, regulation, public procurement, and EU subventions have offered governing and business elites extensive opportunities for corruption, and corporate state capture […] is a defining feature of several new EU member states.

To put an end to such malpractice, both a strong supranational watchdog and fully independent domestic judiciaries, anti-corruption agencies and oversight institutions (also NGOs) would be needed. Regrettably, the EU’s capacity to protect democratic governance among its Member States has proven insufficient, as it has been unable to halt those governing coalitions involved in the dismantlement of institutional checks and balances. Moreover, as the Bertelmann Stiftung punctiliously documents, the recent reversals of high-profile trials (in Croatia and Slovenia), deficient protection for whistleblowers (in the Czech Republic and Slovakia), low political commitment to the anti-corruption fight (in Bulgaria and Romania) as well as an inefficient or outright discredited court system (in Latvia and Lithuania) attest both to the inadequate legislative implementation in CEE and to the public’s growing mistrust in state oversight institutions.

In sum, post-socialist Europe seems to be stuck in a cul de sac. Democratic hollowing and backsliding are firmly locked together in a negative feedback loop. The dealignment between electorates and political parties encourages elites to shun responsibility and breeds exactly those corrupt practices that further estrange voters. The incapacity of the EU to sanction such behaviour provides fertile ground for populist and anti-establishment parties, whose most rational strategy is to curb civil and political liberties to avoid public scrutiny and political accountability when implementing their irresponsible policies.

Four options for the democratic future of the EU

The Euro-crisis, migration crisis and the Brexit have been catalysts for a vibrant debate on a democratic future of the EU. Politicians and academics have contributed to this debate defending blueprints for democratizing Europe. I propose that we can broadly distinguish four proposals.

«The salience of member state solidarity in citizens’ understanding of Social Europe implies that public opinion towards it is crucial for the democratic legitimacy of Social Europe as a political project.»