The European Semester and the social partners: Any chance of friendship?

The European Semester gives European institutions the power to intervene in national labour and social reforms. Although some countries include social partners in the new policymaking process, a recently published report argues that more needs to be done in this respect.

The fact that the European sovereign debt crisis has redesigned the European institutional landscape is by now unquestionable. One of the major changes has been the strengthening of the Stability and Growth Pact (SGP) after the creation of the European Semester (ES), which place EU member States’ annual budgets under surveillance in order to make them comply with the EU’s fiscal targets.

The ES has had profound consequences for social partners. The European institutions now monitor the budgetary plans of the member states and provide them with economic policy guidance in relation to the necessary structural reforms in case of noncompliance with fiscal requirements. This means that the EU can intervene in labour and social policies, which were previously confined to national boundaries.

Given that in many European countries social partners have traditionally been included in the decision-making process regarding labour and social reforms, one fundamental question arises in relation to the role that they can play in the new institutional setting. To what extent can social partners influence the policymaking process both at the supranational and national level?

To answer this and other questions the Eurofound has recently published a report, which provides a map of the involvement of social partners, employers’ organisations and trade unions in the ES from 2011 and 2014, as well as some recommendations to achieve a more balanced situation.

The European Semester calendar is supposed to last from January to June but there are activities related to it throughout the whole year. 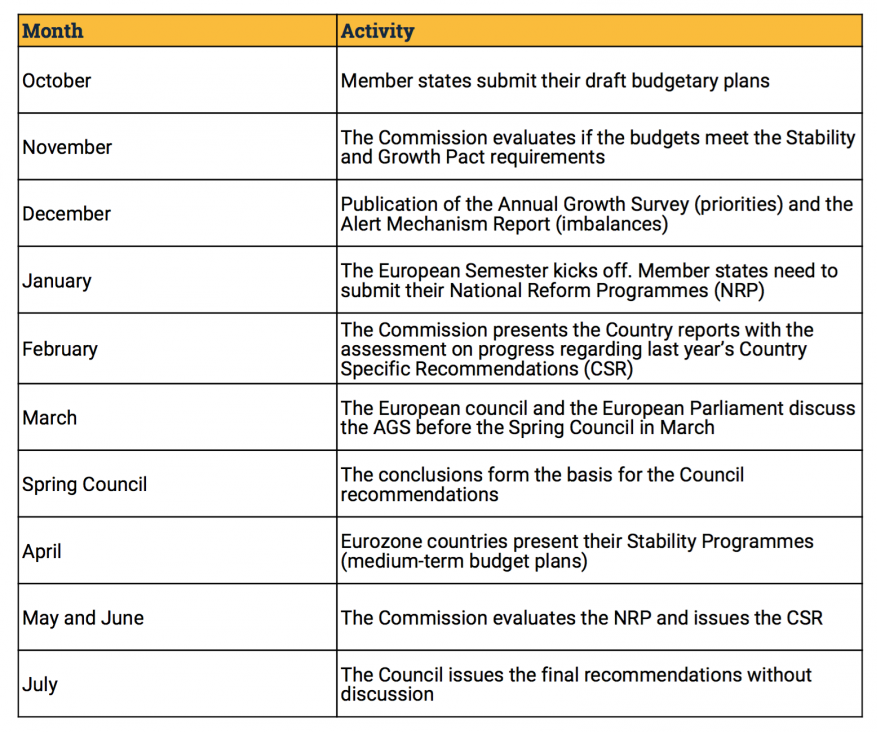 Table 1. The European Semester calendar [Source: Own elaboration on the basis of the Eurofound report]

The report identifies four critical junctures during which social partners could influence the policymaking process, regardless of the lack of formal procedures in the new European economic governance (the “Six pack”).

The first, supranational critical juncture is in November, when the EC has to publish the Annual Growth Survey (AGS), which includes the economic priorities for the upcoming year. In this case, the supranational social partners may be consulted on labour market aspects.

The second juncture refers to the drafting of the Country reports by the EC, which takes place between January and February, and in which national governments are advised regarding their reform policies. Here the Commission could consult with social partners at both the supranational and national level.

Many social partners complain about the low frequency and irregularity of their participation, which is not deemed adequate to achieve a real exchange of views

Later in March, Member states are obliged to consult national social partners to contribute to the design of the National Reform Programmes (NRP). Besides, the European Council asks national governments to consult social partners when they implement the reforms recommended in the country reports. In fact, in 2015 one of the recommendations included in the country reports of Belgium, Bulgaria, Finland, Italy, Luxembourg, Portugal, Slovenia and Spain concerned exactly the need to take social partners into account.

Finally, during the drafting of the CSR proposals in May by the Commission, and in June by the Member States, social partners can be consulted and informed of the process, although there is no possible involvement regarding the elaboration of the CSR.

Regarding the National Reform Programmes, 22 member states involved social partners in the definition or their implementation, and only in three countries (Hungary, Lithuania and Romania) was there no involvement whatsoever. However, trade unions also asked to be given a bigger role in another three countries: Denmark, Spain and Sweden.

As regards the specific forms of involvement of social partners, most of countries held tripartite meetings. Some of them used the standard tripartite bodies already established in their countries whereas other created a specific type of European Committee or other types of ad hoc committees and meetings. In Lithuania and Spain there was only written consultation, although in Spain this changed in 2014 after the demands of social partners to be involved more extensively in the process. These demands forced the government to hold a tripartite meeting about the content of the NRP.

Another important issue is the time devoted to consultation. Many social partners complain about the low frequency and irregularity of their participation, which is not deemed adequate to achieve a real exchange of views. Although in some countries the frequency of the consultation was regular and predictable, in other countries only one meeting was held: Bulgaria, Germany, Spain, Finland, France, Luxemburg, Latvia, Malta, Netherlands, Slovenia and United Kingdom.

The report highlights Belgium as a case of procedural good practice given that social partners participated in the drafting of NRP and they were also asked to give their opinion when the NRPs were finished.

There is a distinction to be made between the degrees of institutionalisation of social partners and the degree of their impact. Whereas in ten countries the involvement of the social partners is highly institutionalised, their views were included in the NRP of only four of these (Austria, Poland, Spain and Sweden). Besides, in the case of Spain the report highlights that only the views of the employers’ organisations were taken into account.

A higher impact has been found in countries like Sweden, Netherlands, Malta, Finland and Belgium. For instance in the Netherlands some pieces of legislation included in the NRP were the result of social partners’ views.

One of the main conclusions of the Eurofound report is that while some countries, such as Denmark and Austria, have not yet established specific procedures to involve social partners during the European semester, the institutionalized national social dialogue that already exists in these countries allows for an adequate participation concerning relevant social and labour policies.

However, the report also highlights that in other countries like Spain and Italy where the EC has asked national governments to consult social partners during the drafting of CSR, the Commission’s demands have not been met. For example, although in Italy the social partners signed a trilateral agreement in line with CSR in June 2011, the Renzi government approved the Law No. 148 (the so-called Jobs Act) without the consent of the trade unions. In this sense, the social partners’ involvement in the European Semester varies depending on national cultures of social dialogue.

On the other hand, there are differences between the assessment of employers’ organisations and trade unions regarding the procedures established by the ES. Whereas the former are in favour of a strengthening of the monitoring role of the European institutions of, the latter are more critical. Many trade unions think that the European Semester promotes a specific policy agenda based on austerity, and ask that the European institutions instead focus on other objectives such as social cohesion or tackling poverty.

All this relates to a broader issue put forward by other reports on the need to “socialize” the European semester, that is that the crucial question is not only to assess the impact of social partners in general, but to evaluate the capacity of those arguing for more social Europe to influence the process.

The EPSR must become EU law – A conversation with George Dassis

Euvisions met the President of the European Economic and Social Committee (EESC), George Dassis, in November 2017, on the occasion of the interinstitutional proclamation of the European Pillar of Social Rights (EPSR), in Gothenburg, Sweden.

The recent congress of the European Trade Union Confederation closed a four-year cycle during which the union movement faced the worsening of the economic crisis, the reinforcement of austerity policies and the creation of a new European economic governance.