The end of the European left? Alternatives after crisis, Syriza and Brexit

Rather than clinging to traditional notions of social Europe, European leftists should look at the continent’s emerging civil society experiments to find a way for the future.

Social democratic parties and their members typically embraced Delors’s promise of a supranational salvaging of social democracy, or social Europe, especially following the experience of failure or the abandonment of Keynesianism-in-one-country in the UK, Spain, France, Sweden, and elsewhere.

Yet, this turn to the EU, which took place during the mid-1980s, is somewhat surprising. At the same time as European integration came to be viewed by left parties as a means by which to challenge the unfettered market, the EU was simultaneously establishing the single European market, which threatened to further rule out alternatives to a largely free market system.
Social democratic parties and their members typically embraced Delors’s promise of a supranational salvaging of social democracy, or social Europe, especially following the experience of failure or the abandonment of Keynesianism-in-one-country in the UK, Spain, France, Sweden, and elsewhere.
In the UK, trade unions and the left of the party came to view European integration as a means through which to challenge Thatcher and Thatcherism following the transformation of British industrial relations during the 1980s; especially following the initiative taken by European Commission President Jacques Delors in addressing the national Trades Union Congress in 1988. The French socialists openly sought to promote a stronger European social model and create a more substantive European “economic government” following President Mitterrand’s infamous policy U-turn in 1983. In Spain, the Spanish socialist party (PSOE) was widely considered to be country’s most pro-European party during the 1990s, despite many within the party having “negative concerns about the capitalist and imperialist forces promoting European integration” during the earlier post-Franco transition period. There was, therefore, a general trend followed by social democratic parties—from an initial caution towards European integration, to an eventual embrace—which was witnessed across the European Union.

Stuck in the third way

The promise of social Europe acted in part to conceal and obfuscate the long-term failure and increasingly impracticable nature of the social democratic project, and therefore (also, in part) provide a source of legitimation for Third Way social democracy. The declared pursuit of social Europe could be made, safe in the knowledge that EU-level institutional constraints would inhibit the development of more substantively redistributive policies, thereby ensuring both that the operation of the single European market would be free from political (or politicised) intervention (and therefore contribute towards the necessary intensification of European capitalism), and also provide an institutional target to be blamed for the subsequent non-realisation of the declared goals of social Europe. In this sense, therefore, the goal of social Europe represented an empty, yet important (precisely because it was empty), ambition that acted to sustain European social democracy by papering over its inherent contradictions. 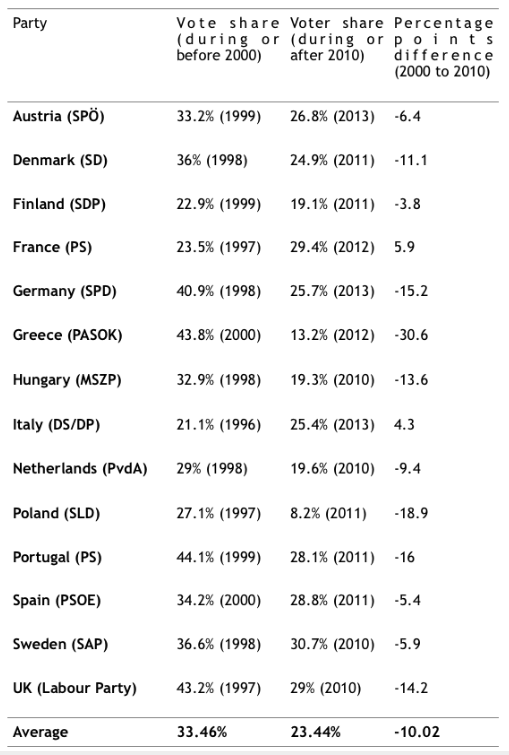 With the onset of the global economic crisis in 2008 it was initially hoped that social democratic parties would return to their more traditional Keynesian policies. Yet this proved not to be the case, as each party stumbled to revise their programme in a way that would prove both workable and electable.

At the same time, the vacuous nature of the social Europe project became increasingly evident. Many had placed their hope in the EU’s Lisbon Strategy, which was adopted in 2000. But by 2005, the process had been largely stripped of its concern for social cohesion or social policy.
With the onset of the global economic crisis in 2008 it was initially hoped that social democratic parties would return to their more traditional Keynesian policies. Yet this proved not to be the case, as each party stumbled to revise their programme in a way that would prove both workable and electable. The 2009 European Parliament election witnessed a victory for the centre-right. Social democratic parties that were in office when the crisis hit suffered particularly badly, including the Spanish PSOE and especially the Greek social democratic party (PASOK).

Syriza wagered that the potential for a legitimation crisis that would be prompted by the clear and visible confirmation of the EU’s so-called “democratic deficit” would be enough to secure a compromise or concessions from Europe’s political elite.

Social Europe also continued to be little more than a pipe dream. The EU’s economic policies consolidated the inequalities and pro-market agenda witnessed before the crisis, most obviously through a continued commitment to fiscal discipline, which was also the overriding concern during the Greek debt crisis. Attempts to implement or agree more progressive policies at the EU-level—such as the reform of the Working Time Directive, and the adoption of a Pregnant Workers’ Directive and fourth anti-discrimination directive—have been largely unsuccessful.

Alternatives for a progressive Europe

It is within this context that we should understand the Syriza experiment for the left. Syriza sought to test the degree to which the European Union could be challenged and directed towards a more progressive agenda. Syriza wagered that the potential for a legitimation crisis that would be prompted by the clear and visible confirmation of the EU’s so-called “democratic deficit” would be enough to secure a compromise or concessions from Europe’s political elite. As Varoufakis puts it, “Our five month long negotiation was a contest between the right of creditors to govern a debtor nation and the democratic right of that nation’s citizens to be self-governed”. It turned out that the creditors held the trump card.

How, then, should those who seek a progressive alternative approach an apparently unreformable neoliberal institution such as the European Union, bearing in mind that opposition to it is likely to be interpreted as yet another sign that nationalist instincts prevail? Opposition to the EU clearly risks fanning the flames of nationalism, as we saw following the outcome of the Brexit vote. On the other hand, support for the EU risks perpetuating the myth that contemporary capitalism can be rendered more fair through European integration; and in the process legitimating the very institutions which seems so intent on imposing neoliberal solutions to the crisis of neoliberalism.

It would be better perhaps to neither support nor reject European integration. Instead, we might focus on the way in which alternatives to the EU’s austerity agenda can and are being constructed in the present. In studying the Greek crisis, for instance, we should avoid concluding that the experience of the 2015 events and the eventual Syriza U-turn illustrate the need for a Grexit. This would risk a resurgence of nationalism (as well as increasing the likelihood of a greater economic crisis for Greece). We can instead highlight the multiple and innovative forms of grassroots solidarity movements that have sprung up to create new forms of mutual aid in the context of that crisis. As Sara Motta points out, we cannot simply wish into existence an emancipatory consciousness and movement “out of the shards of broken glass from where the police baton attempted to bash out our hope”. Instead we surely need to nurture those “popular projects, practices and subjects of emancipation” that exist within the present. It is these new avenues for progressive action, which continue to disrupt the ongoing attempts by Europe’s political and economic elites to impose ever-fiercer forms of capitalist domination, towards which we should perhaps be inclined to turn.

An unabridged version of this article has appeared on Near Futures Online.