By Sofia A. Perez

As Spanish parties struggle to form a coalition government after the latest elections, at stake is not only the future of the country’s social model, but also the leadership of the country’s left.

Last December, general elections in Spain rendered a parliament split into four large blocks: those of the traditional two main parties, the conservative Partido Popular (PP) and socialist PSOE – both of which suffered large losses – and those of the two newcomers, the centre-right Ciudadanos and the anti-austerity Podemos party. The collapse of support for the two traditional parties has created a political scenario unprecedented in Spain’s recent history: one in which it has not seemed possible to put together a parliamentary majority, or even a parliamentary alliance, to appoint a new prime minister. One attempt – that of the PSOE’s leader, Pedro Sanchez, to form a government with the support of Ciudadanos and Podemos has collapsed due to disagreement over economic policy and social reforms.

Though much happened between the elections and the recent collapse of negotiations between the PSOE and Podemos, the outcome could be foreseen early on. Soon after the elections, Ciudadanos and Podemos both announced their unwillingness to enter a government that included the other. The PP insisted that it had a right to lead a government because it continued to hold the most seats in parliament but its seats, together with Ciudadanos, its natural partner, were not sufficient. Sanchez, on the other hand, insisted that he would not consider a grand coalition with the PP under the leadership of Mariano Rajoy, even though a grand-coalition that would exclude Podemos is the option supported by large segments of the economic establishment and many veteran PSOE leaders. Podemos’ national leader, Pablo Iglesias, on the other hand seemed to signal a preference for another round of elections when he announced several programmatic “red lines” his party would not sacrifice. Once Sanchez accepted an invitation by the king to go first in trying to form a government (one Rajoy had declined), he attempted to put pressure on Podemos by initiating negotiations with Ciudadanos first. Podemos, which had proposed a coalition of the Left with smaller parties to the PSOE (one in which it would hold major ministerial posts), did agree to enter negotiations with Sanchez’ team. But when PSOE and Ciudadanos – with great fanfare – announced an agreement on a joint government program, Podemos walked away claiming bad faith on the part of the Socialists.

The inability of the Socialist leader to draw Podemos into an alliance that would also have included Ciudadanos, was in many ways over-determined. One of Iglesias’ “red lines” – the demand to allow a consultation on secession in Catalonia – was understood to be unacceptable for the PSOE. But if the territorial issue appeared on the surface to be the principal obstacle, in the end the talks between the PSOE and Podemos broke down over economic issues: particularly tax reform and labour market regulation. To explain this outcome, it is useful to understand just how radically Spain’s social model has been altered since the start of the Eurozone crisis – in particular in the area of labour market regulation – and how inadequate social policy has been in addressing the fall-out.

The Spanish social model after the crisis

Among the debtor states of the Eurozone, Spain has been one of the most compliant with the recommendations coming from Brussels and Frankfurt. When in the Fall of 2011 Spain and Italy became the target of bond market contagion, the socialist government of Rodriguez Zapatero – supported in parliament by the PP – sped through an extraordinary reform of Article 135 of the Spanish constitution which now stipulates that the central and regional governments must keep their structural deficits in line with the margins “established by the European Union for its member states”. And shortly after taking office the Rajoy government implemented an aggressive labour market reform that received the approval of Brussels. That reform, passed in February 2012, included four key measures: first, a large cut in statutory dismissal costs for workers on permanent employment contracts; second, the ability of employers to impose unilateral changes to employment conditions or suspend contracts when a company has seen a reduction in revenue over two trimesters; third, a reform of the collective bargaining system that allows any agreement reached at the firm level to override higher level collective bargains (whether sectoral or territorial), and fourth, the abolition of the principle of “ultra-activity” whereby expiring collective bargains in Spain remained in effect until a new one had been reached. Shortly after, and as part of large spending cuts, the PP also implemented a large reduction of unemployment benefits just as the new labour market measures were giving rise to a new wave of job shedding.

The effect of these combined measures has been the intended “internal devaluation” of labour costs (one that was already underway prior to the reforms) but also a sharp deterioration of employment and living conditions, in particular for those who have lost jobs or are entering the labour market. Some of these effects are illustrated in the following graphs. The coverage of collective bargaining – traditionally quite high even by European standards in Spain – fell substantially (see Figure 1), from around 80 per cent of salaried workers to about 55 per cent by some measures. And the terms under which employees are hired have taken a notable turn for the worse. One of the ways in which this is reflected is in the sharp drop in the average number of days for which temporary employment contracts are written (Figure2), in particular in industry where it fell from over eight months in 2008 to less than 50 days in 2015. Indeed, by the end of that year, as much as a quarter of all temporary contracts where written for less than 7 days (El Pais, January 16, 2016). 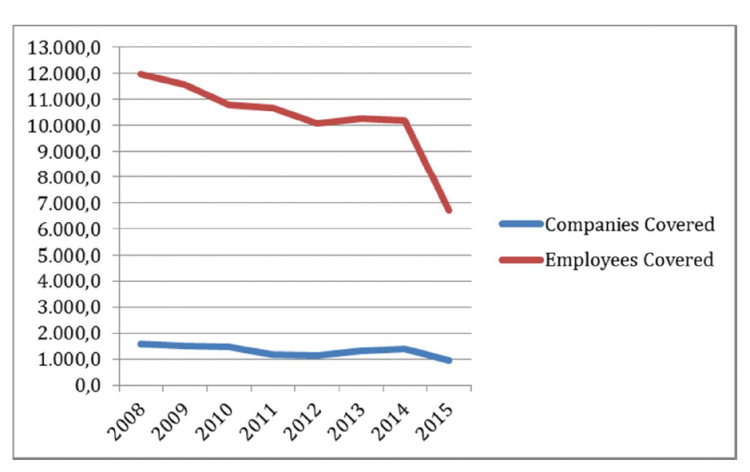 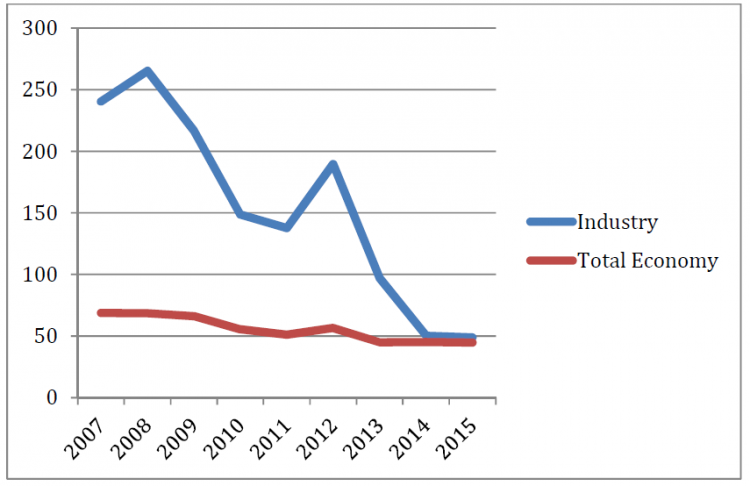 Meanwhile, and in spite of the return to substantial growth in 2015, the labour market reform has been less effective than often portrayed. While employment has bounced back since 2013, it has been heavily dominated by temporary employment (which, as reflected above, has become much more precarious) and the share of involuntary part-time jobs has also increased. Only 8.1 per cent of new contracts in 2015 took the form of indefinite contracts, and in terms of “full-time equivalents”, the number of employed in Spain at the end of 2015 remained over two million lower than it stood in 2008 (Figure 3). Though “unemployment” has fallen, this is also partly due to a contraction of the labour force (through emigration and lower participation).
Long long-term unemployment, the category of greatest concern, has remained stubbornly high at over 12 per cent (more than half of all unemployed). 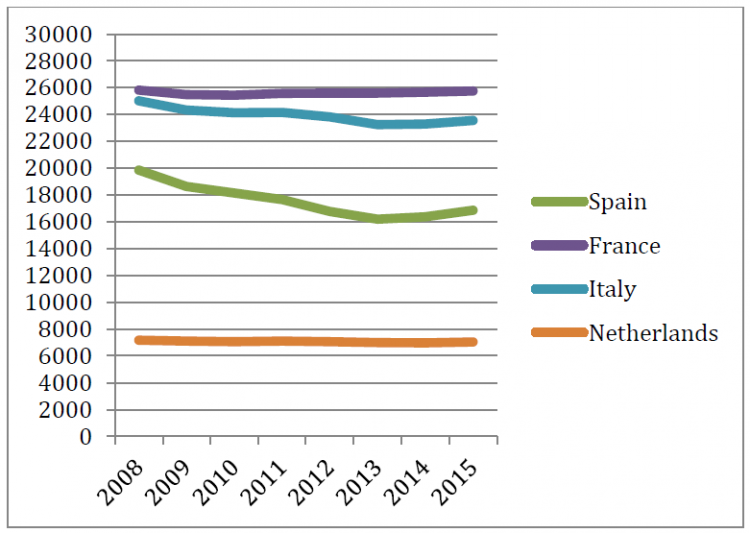 The lack of employment opportunities has also been heavily concentrated in certain cohorts (the young and low-skilled), and the proportion of people (in particular children) living in “low work intensity” households has risen dramatically (from 6 to over 17 per cent). Meanwhile, the proportion of registered unemployed receiving contributory unemployment benefits (now at considerably lower replacement rates than in the past) has fallen to less than 20 per cent, and less than 60 per cent receive any form of cash benefit (Figure 4). Indeed, by 2015 there were over seven hundred thousand households known to have no official income at all. 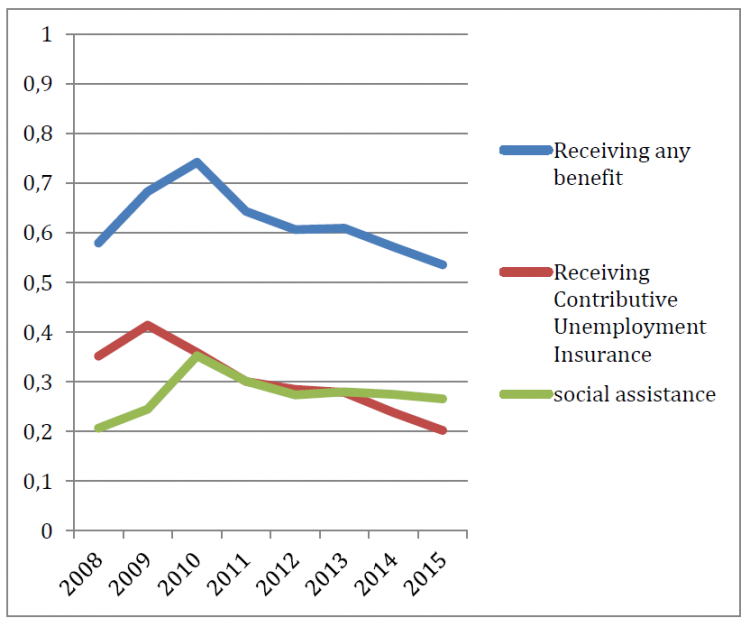 Given these circumstances, it is not surprising that Spain is also the country (among the Eurozone debtor states) that has seen the highest rise in inequality from 2008 to 2015, as reflected in its before and after transfer Gini coefficient (Figures 5 and 6) and the rise in the 80/20 quintile income share ratio (Figure 7). 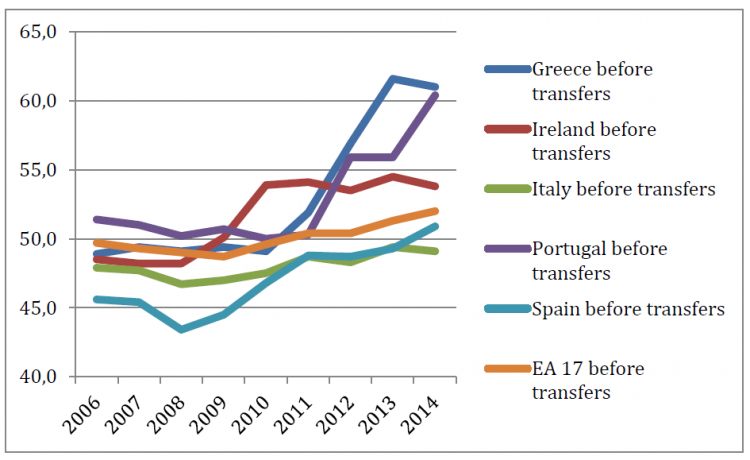 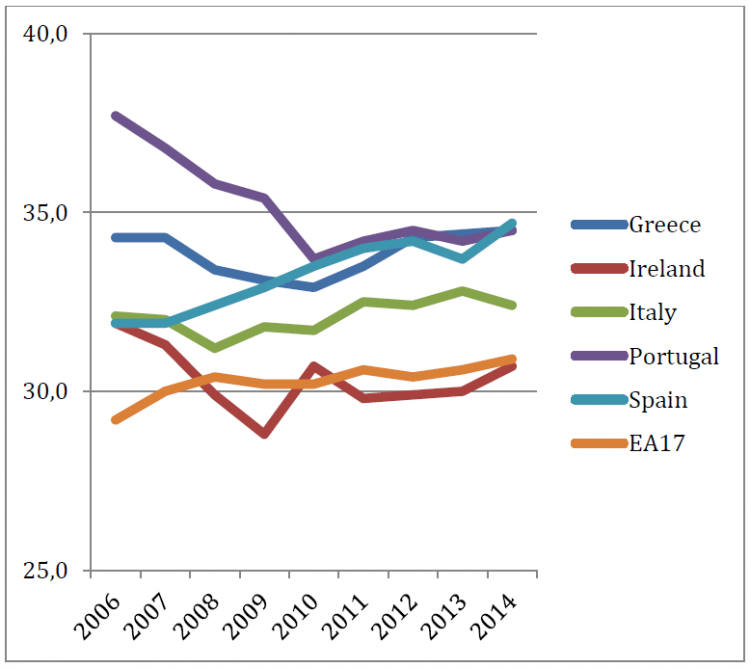 A new left for Spain?

It is in this context of a highly perceptible erosion of social rights that labor market and tax reform have taken on such centrality in coalition talks. Both PSOE and Podemos included promises to undo the PP’s labour market reforms in their programs, as well as a commitment to retract (or at the very least revise) the reform of article 135 of the Constitution so as to assure social protection. The PSOE’s agreement with Ciudadanos does mention many of these measures (such as a minimum income support for families with no income). But its commitment to raise corporate and personal income taxes to finance this and other new social measures appeared to go by the wayside. Most controversially, the employment reform included in the agreement with Ciudadanos appeared closer to the latter party’s plan to eliminate the distinction between temporary and indefinite contracts altogether with lower dismissal costs than are currently attached to temporary contracts in the first two years, though gradually increasing if employment continues.

The degree of the PSOE’s apparent concessions to Ciudadanos on social and economic policy appear more intended to facilitate the support of the PP, whose abstention in parliament, in theory, could allow Sanchez to form a government with Ciudadanos and some smaller parties. Such a prospect, or some other form of “default” to a grand-coalition if Sanchez fails to obtain enough support to form a government in a first round of parliamentary votes, might satisfy foreign investors and Brussels. For the time-being, it has allowed Podemos a way back to the position that many believe the party’s leadership prefers for itself: that of taking the leadership of the Left opposition in Spain.