On the eve of the German elections, Alternative für Deutschland prevails on Twitter

We have followed two weeks of the German electoral campaign on Twitter, collected over 200,000 tweets, and monitored the six main parties. We found that the rightwing nationalist Alternative für Deutschland dominates Twitter conversation.

It is a bit puzzling how, after a year in which populist forces have threatened the political order of countries all over Europe, Germany so far has managed to have itself a normal – many would say boring – electoral campaign.

Angela Merkel’s Christian Democratic Union (CDU) is likely to be the largest party in the new Bundestag, as polls show its likely share of vote to be between 36% and 37%, at least 15 or so points ahead of Martin Schulz’s Social Democratic Party (SPD). However, given Germany has a proportional system, the CDU will most likely be unable to govern by itself, so all eyes are on the battle for the third place, which will have an effect on which party will be Merkel’s coalition partner. The right-wing Alternative for Germany (AfD), with its eurosceptic and anti-immigration programme, will most probably win parliamentary seats for the first time. This will perhaps be the most important development of this election. Moreover, according to the latest polls AfD is leading the “race within the race” for the third place with 11-12%, maintaining a slight lead over its main competitors – the Left Party (Die Linke), the Liberal Democrats (FDP) and the Green Party – all lagging behind at 7% to 10%.

Recently in Europe we have witnessed to a steep rise in so-called populist parties, alongside with a significant wave of innovation in political communication, especially in times of electoral campaigning. When new political actors walk into the scene, they often show innovative communication strategies, such as the widespread use of online channels, a highly engaged network of supporters, and a general inclination towards negative campaigning.

We have recently followed two weeks of the German electoral campaign on Twitter, collecting more than 200,000 tweets. We monitored the online activity of six main parties, following all candidates and collecting citizens’ reactions – in the form of retweets and replies – to candidates’ tweets. Special attention has been dedicated to the electoral campaign of Alternative for Germany. As it is often the case with non-traditional political actors, AfD emerges as a party in which digital activism, both on the candidates’ and supporters’ side, plays a major role. 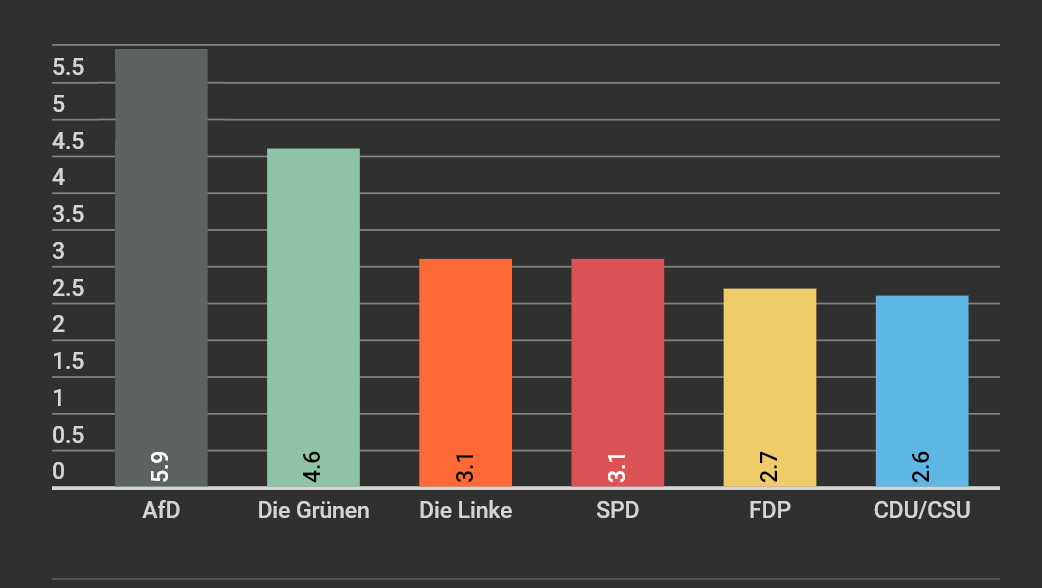 As Figure 1 shows, AfD candidates have proven to be by far the most prolific on Twitter: the average AfD candidate tweets six times a day, roughly twice as much as other parties candidates. At the same time, they are the most able to engage their electoral base: on average, AfD tweets are retweeted seven times, whereas tweets by other parties’ candidates only resonate (on average) 1,66 times (see Figure 2). At the other end of the spectrum we find candidates of Merkel’s CDU, who are retweeted less than once per tweet, on average. Interestingly, analogous results emerged from a previous EuVisions analysis which compared the online behaviour of supporters of the Ukip and mainstream British parties at the time of the Brexit referendum. 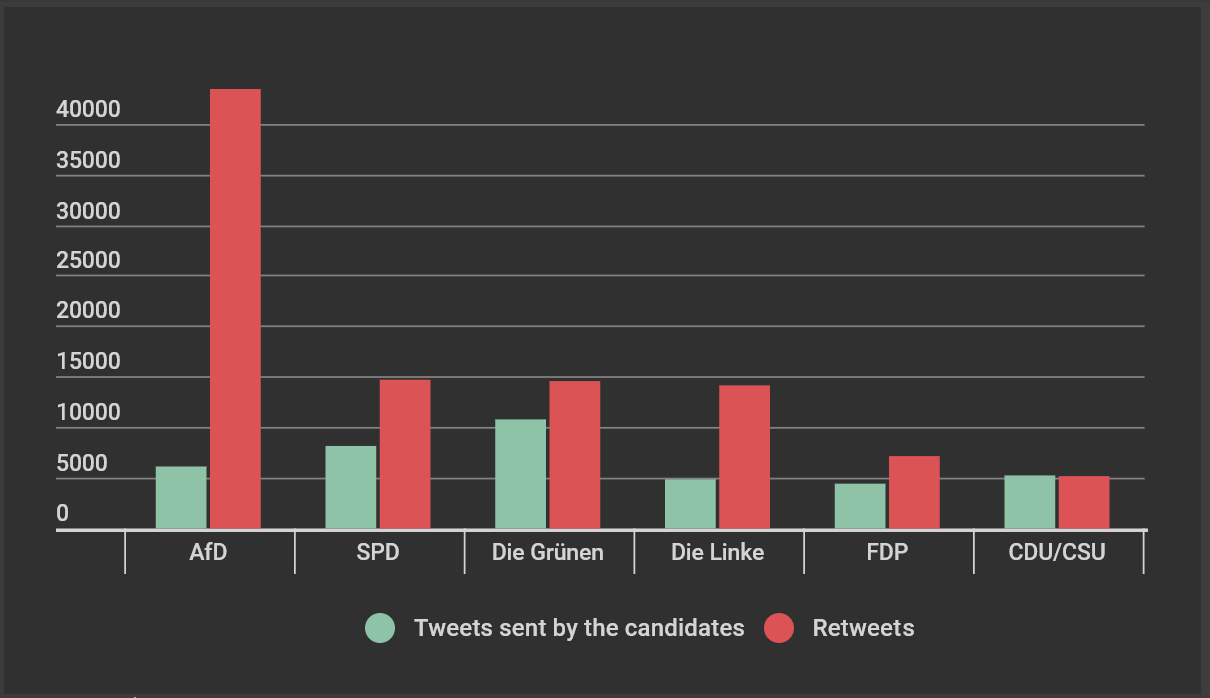 There’s a second aspect worth noting in AfD’s digital campaign, which this party shares with the SPD: in both cases, online campaigns are highly personalised, revolving to a great extent around spitzenkandidaten (see Figure 3). 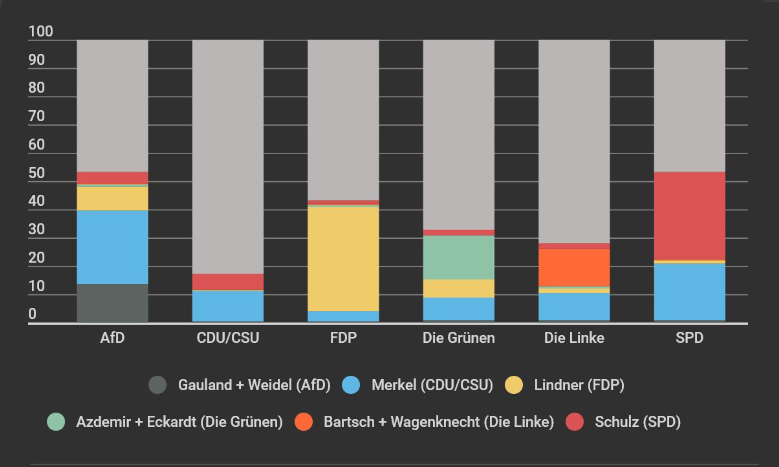 Most of SPD-related tweets, however, talk about the party candidate Martin Schulz, who is mentioned in one out of three tweets. This is not the case for AfD, whose tweets are only in small part centered on the two party leaders, Alice Weidel and Alexander Gauland. On the other hand, the party and its supporters make large use of negative campaigning against AfD’s competitors, in the first place, unsurprisingly, Angela Merkel.

These results show how the social media battlefield in the German electoral campaign largely departs from current polls. Thanks to an effective use of social media strategies by their candidates, and a highly motivated action on the part of supporters, Alternative für Deutschland seems to be dominating the scene on Twitter. The extent to which elections can be won or lost on social media is still an open question. However, it seems by now quite a solid finding that populist parties have a higher capacity to exploit digital arenas in order to boost and propagate their slogans and influence the political agenda. This should not be underestimated by mainstream political forces.

We thank the transparency group Abgeordnetenwatch.de for providing data on Bundestag candidates.

«German leader of the social democrats Martin Schultz recently made the case for a United States of Europe. In academia, federalists have argued in favour of this position. Their ideal is a sovereign European state democratically legitimised by a European people»