To perceive and to believe: misperceptions about immigration and European solidarity

Misperception of immigration numbers has changed across time, but continues to endure among European citizens. Misperception is linked to Eurosceptic preferences and restrictive immigration policies.

Along with the increased politicisation of EU affairs, immigration has become central in the political debate on European integration and has been cast as one of the three main ‘crises’ of the EU, together with the Eurozone crisis and Brexit (Caporaso, 2018). This is not only a consequence of the 2015 refugee crisis, but also of the constant increase in intra-EU mobility and migration from non-EU countries that took place in the last few decades. At the end of 2016, more than 50 million EU residents were living outside their country of birth; of these, only around 20 million were born in another EU member state (Eurostat, 2018). New and changing patterns of migration from, towards, and within Europe has resulted in an increasingly diverse population in terms of countries of origin, ethnic background, cultural practices and languages (Geddes and Scholten, 2016; EPSC, 2017). These transformations were followed by a surge of immigration toward the top of the concerns of European citizens (Eurobarometer), and by an increase in support for anti-immigration policies and for Eurosceptic political parties opposing immigration and multiculturalism across the EU. Indeed, Eurosceptic and populist parties succeeded in framing the refugee crisis in terms of border re-closure and exclusionary practices, advocating for a ‘fortress Europe’ (Borzel and Risse, 2018). As a consequence, the integration of migrants and the handling of refugees have dominated electoral campaigns across Europe, such as in the case of the Brexit referendum in the UK, or in elections in Austria, France, Germany, Italy and the Netherlands.

This article investigates whether and how citizens’ attitudes towards immigration—in particular, the misperception of the actual number of immigrants living in their countries—are associated with their support for the EU and for policies favouring the inclusion of foreigners in domestic labour markets and welfare states.

The literature investigating attitudes towards immigration has proposed two main explanatory models, based on self-interest and identities respectively. The first theory evaluates the distributional consequences of immigration, and thus the competition between immigrants and natives over scarce resources, such as access to the labour market or to welfare benefits. The second approach emphasises instead group-related attitudes and symbols in shaping attitudes towards immigration, arguing that ideal-interests override the influence of material concerns (Hainmueller and Hopkins, 2014).

A complementary explanatory factor considered by research relates to citizens’ information about immigration: ‘if a sense of threat underlies opposition to immigration, then beliefs about the size of the immigrant population are a logical trigger for such feelings of anxiety’ (Sides and Citrin, 2007, p. 480). Previous studies have documented the public’s tendency to overestimate the size of minority populations, and that fears are exaggerated by widespread misperceptions regarding the actual figures (Nadeau, Niemi, and Levine, 1993; Silgeman and Niemi, 2001; Citrin and Sides, 2008; IPSOS, 2015). Such an exaggeration can exacerbate anti-immigrant and anti-solidarity sentiments, often linking migration to crime, economic crisis or terrorism. As a consequence, those who overestimate the proportion of foreign minorities tend to be more chauvinistic, and to oppose programs that would benefit these groups (Theiss-Morse, 2003).

Misperception is defined here as the difference between the average estimate of the foreign-born population and the actual number of foreigners. Figure 1 plots the average estimate of immigrants in 19 European countries against the actual size of the foreign-born population as derived from OECD data. The country average estimate is based on a survey question included in two waves of the European Social Survey in 2002 (wave 1) and 2014 (wave 7), asking respondents: ‘Out of every 100 people living in [country], how many do you think were born outside [country]?’ As Italy was not included in the ESS 2014 round, data are taken from a pre-electoral national survey conducted by the Pastel2018 project of the University of Milan and IPSOS, in collaboration with ITANES and REScEU, that included a comparable question. In both graphs, a 45-degree line is drawn as a basis for comparison. Overestimation emerges at both points in time in every country: the estimate is above the line, meaning that the average citizen in these countries has continued to overrate the percentage of immigrants.

Figure 1. Average estimate and actual percentage of foreigners in 2002 and 2014. 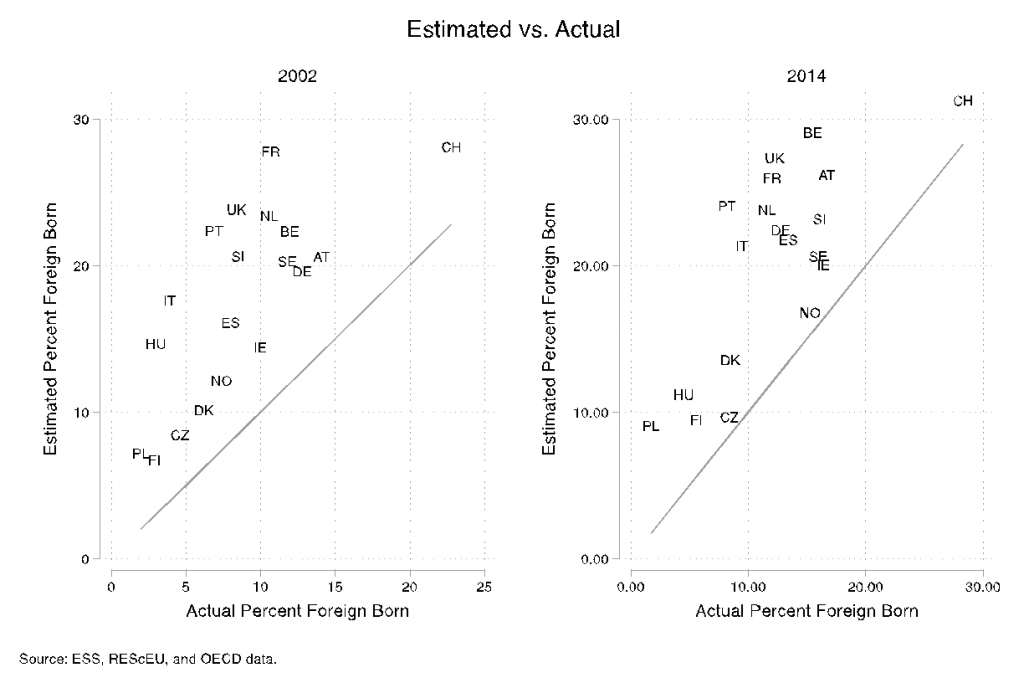 For each of the 19 countries considered, Figure 2 depicts the difference in average misperception between 2002 and 2014 (2002–2018 for Italy). Here we can identify three clusters of countries: those where it has decreased by at least 2% (from Slovenia to Italy); those where it remained somewhat stable with variations under 2% (from Ireland to Belgium), and those where misperception has increased (Poland, Germany, and Austria). In the vast majority of the countries considered, misperception has decreased or remained stable. An interesting result if we consider scholars’ emphasis on the worsening of information (Lazer et al. 2018), and the increase in the percentage of foreign-born residents in basically all countries (from an average of 8.7% in 2002 to an average of 12.11% in 2014).

Figure 2. Difference in average misperception between 2002 and 2014. 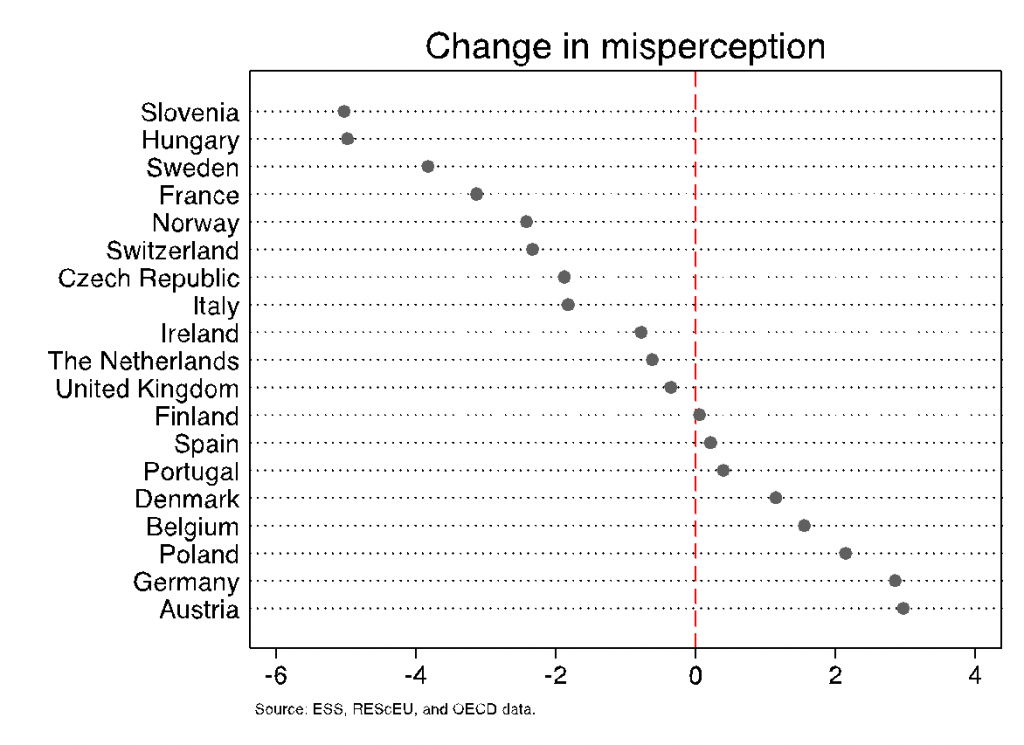 Given that the meaning of one percentage point of misperception is different in countries with differing numbers of foreigners (Citrin and Sides, 2008), Figure 3 depicts a different measure of misperception: the ratio between the estimated percentage to the actual share of foreigners. The ratio here is plotted against the actual share of foreigners born abroad, together with a polynomial fit line. In both 2002 and 2014, the fit has a steep downward slope, meaning that the magnitude of misperception is higher in countries with relatively few immigrants. For instance, in 2002, Italy, Hungary and Poland had a very low percentage of foreign-born population, but a very high level of estimated immigrants. While the pattern is similar in 2014, the situation depicted by the figure seems to have improved, with only Poland maintaining a very high level of relative misperception.

Figure 3. Misperception ratio to actual percentage of foreigners in 2002 and 2014. 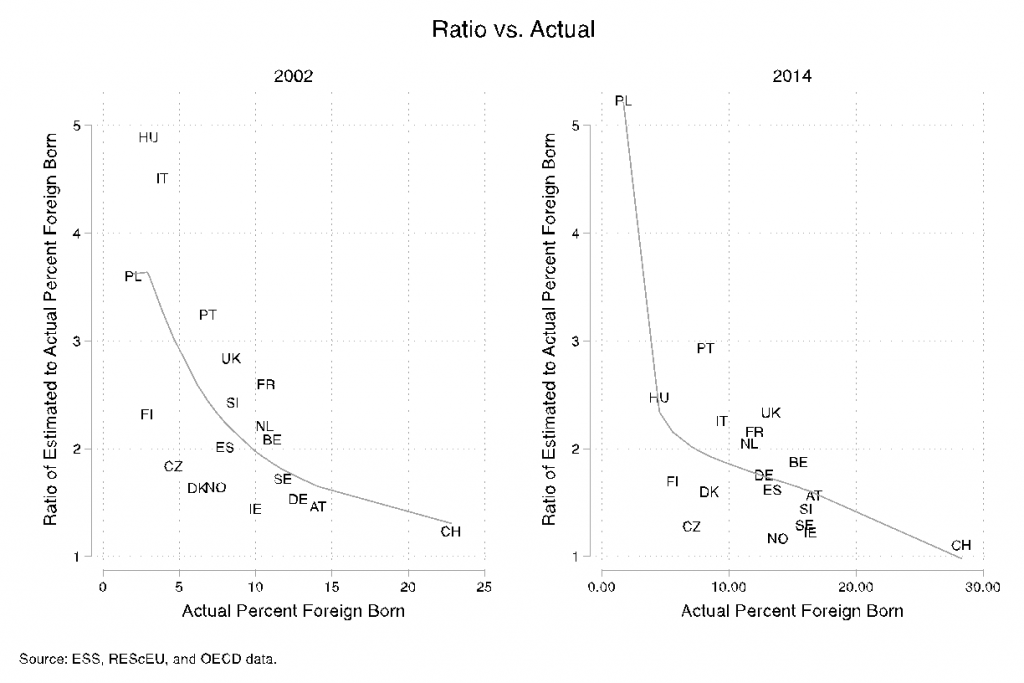 Misperceptions and attitudes towards the EU: the Italian case

Italy represents a focal case study, given that immigration was one of the most salient issues during the electoral campaign, as the first article of this series has shown, and remains one of the main topics on the current government’s agenda. The REScEU survey allows us to dig deeper into the misperception of immigration in the middle of the 2018 Italian electoral campaign. It is worth noting that about 40% of the interviewees decided not to answer our question, probably for fear of giving a wrong estimate. In our survey, we asked for an estimate of both intra- and extra-EU foreigners. The perceived percentage of EU-28 foreigners living in Italy averages 9.09%, with the real value being 2.6%. The estimated percentage of extra-EU-28 foreigners living in Italy averages 12.26%, while the real value stops at 5.9%. This means that on the whole, Italian citizens over-represent the number of foreigners living in Italy by more than 10%.

Figure 4 reports the average misperception of both intra- and extra-EU foreigners by macro-region, together with the five-year percent change in immigration levels computed for each area and the actual percentage of foreigners living in the area in 2018. The figure suggests that misperception is detached from the actual numbers of immigration, given that it is higher in areas with very low numbers of foreigners, such as in southern regions.

We now turn to investigate whether there is an association between misperception and preferences regarding the free movement of workers and citizens, and the evaluation of EU and Euro membership. From Figure 5, it emerges that among more cosmopolitan citizens, who would allow immigrants to work in their country and to benefit from the social security systems, the level of misperception is significantly lower compared to chauvinists, respondents that favour exclusionary policies. Looking at Figure 6, a significant association also emerges between misperception and the evaluation of the EU and Euro membership. Regime and policy specific Eurosceptics tend to over-represent the immigrant population much more than do Euro-enthusiasts. This indirectly testifies to the intertwining of the EU issue and that of immigration.

To sum up, survey data suggests that misperception continues to endure across Europe, but in many countries (Italy included), it has decreased in the last 15 years. Misperception tends to be higher in countries with lower levels of immigration, and is thus decoupled from real immigration levels or changes. Moreover, a test of the Italian case confirms that higher levels of misperception are associated with more restrictive policies towards minorities as well as a negative evaluation of the EU. These results show the need for an improvement in the quality of information available to the general public, both directly—by holding media and politicians accountable for what they report—and indirectly, through EU and international programs that aim to increase the knowledge of European citizens and thus dilute fear of the immigrant.