Immigration, free movement and the politicisation of demography. The move of Hungary to demographic nationalism

Hungary faces adverse demography due to low birthrates and large-scale emigration. The government’s skewed focus on pronatalism puts the burden on the most vulnerable and undermines emancipatory politics.

On the occasion of International Women’s Day 2020 last month, campaigns across the globe celebrated women’s empowerment and the continuing struggle for gender equality. The UN’s comprehensive Generation Equality campaign, for example, calls for an end to gender-based violence, and demands economic justice and rights for all, bodily autonomy, sexual and reproductive health and rights, and feminist action for climate justice, technology and innovation for gender equality and feminist leadership. There is a lot to be done in order to achieve these goals, even in some rich liberal democracies in the European Union, and especially Central and Eastern European member states (Figure 1). 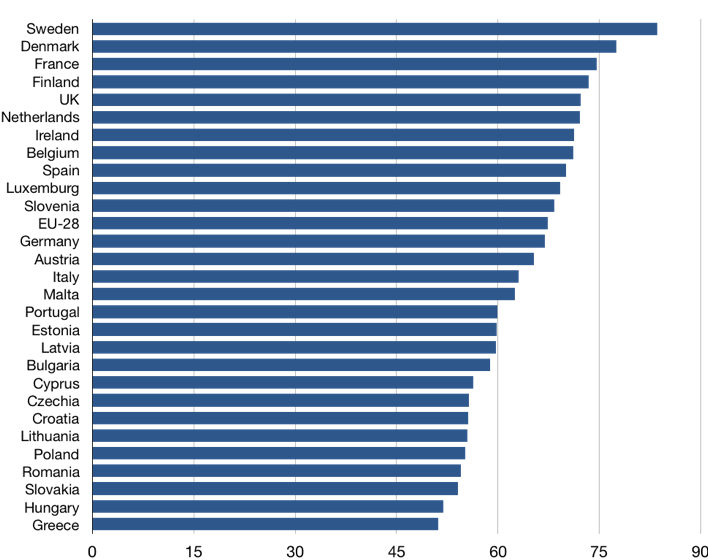 Given that Hungary ranks so low on this index, it is particularly worrying that the government has put the rights of women (and other vulnerable groups) aside and has elevated childbearing in the context of the traditional family to a top policy priority. In a stark contrast with the set of goals outlined by the UN, Katalin Novák, the Hungarian Minister of State for Family, Youth and International Affairs and Vice President of Fidesz (the party that has governed Hungary for the last decade) has argued that motherhood is really the centerpiece of a woman’s life. In an op-ed entitled ‘Being a woman is a privilege’ written on occasion of International Woman’s Day 2020, she emphasised the centrality of the family for a ‘strong and healthy’ Hungarian nation, cataloguing the governments’ plethora of measures that incentivise childbearing.

Novák’s article conveys the dominant discourse promoted by the Hungarian national-conservative political leadership that predicts a looming demographic disaster and that has sought to increase fertility rates in the country by putting forth an insistently pronatalist programme. Regardless of whether one agrees with their goal, however, such policies should be designed very carefully.

First, by putting pressure on women to have (more) children, they may add to the already increased demands of care work in ageing societies, since women are the primary providers of care and unpaid housework worldwide. Moreover, they may contribute to perpetuating economic inequality between women and men, by pushing women out of the labour market and/or by widening the existing gender pay gap. We know that the latter is very strongly driven by a ‘motherhood penalty’, when women’s income tends to decline sharply after childbirth, having a lasting effect. Recent research suggests that the on-going COVID-19 crisis may further exacerbate these trends.

Another problem is the variant of pronatalist discourse promoted in Hungary, which perpetuates harmful stereotypes. Famously, the Speaker of the National Assembly of Hungary in a speech at the Fidesz party congress in 2015 railed against ‘gender madness’, claiming that the political leadership did not want to ‘make Hungary a society of male-hating women and feminine men who are afraid of women.’ ‘We want our daughters to consider the highest quality of self-realization to be able to have grandchildren for us’ – he concluded. This stance not only undermines women’s autonomy and reproductive rights, but also the rights and equality of other vulnerable groups who not do not fit into the narrow ideal of the traditional family, including ethnic and sexual minorities.

Analysts have increasingly come to the realisation that the strength of anti-immigrant sentiment in Central and Eastern Europe can only be properly understood in connection to the broader demography of the region.

Third, there is the link with migration. The politicisation of demography also affects migrants, who, in the context of low birthrates, are cast as a threat to the natives. Indeed, it is widely known that Central and Eastern European opinions related to immigration from outside Europe are negative (Figure 2, darker colours mean more opposition). Even though the situation is only slightly better in other parts of Europe, what sets Central and Eastern Europe apart is that it hosts comparatively much fewer migrants than the rest of the EU. In fact, outward migration from the region is of much larger magnitude than the rates of inward migration. And this large-scale emigration is also part of the problem. 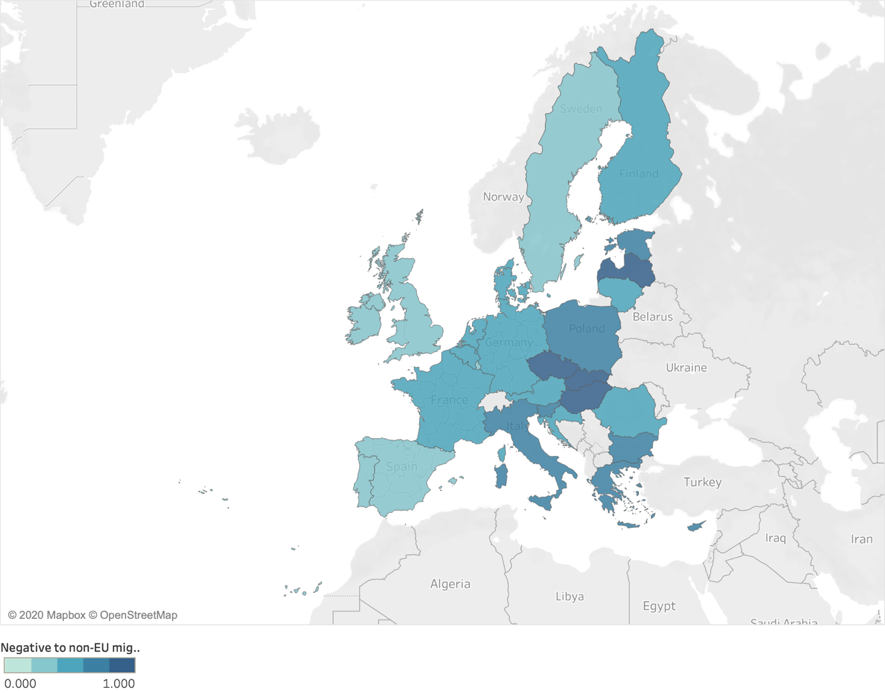 Analysts have increasingly come to the realisation that the strength of anti-immigrant sentiment in Central and Eastern Europe can only be properly understood in connection to the broader demography of the region. One of the most influential proponents of this line of thinking, Ivan Krastev, has argued that the combination of low fertility rates with large-scale outward migration from the region is conducive to ‘demographic panic’, and it is this that drives Central and East Europeans’ negative stance towards incoming migrants.

Political leaders, such as Hungarian Prime Minister Viktor Orbán, routinely link the issues of migration and fertility, e.g. in a recent speech:

‘We are living in times when fewer and fewer children are being born throughout Europe. People in the West are responding to this with immigration: they say that the shortfall should be made up by immigrants, and then the numbers will be in order. Hungarians see this in a different light. We do not need numbers, but Hungarian children. In our minds, immigration means surrender’.

Note that this formulation contains a veiled accusation against ‘People in the West’, who allegedly seek to solve the problem of population decrease with more immigration and points to the tendency among Fidesz political leadership to present themselves as the self-appointed saviours of Europe. The attitudes of Western Europeans and their purportedly pro-migrant policies are also part of the demographic panic.

To be sure, the politicisation of demography is not a Central and Eastern European specificity, but part of a broader trend.

It is, then, quite ironic that many of the migrants that Western countries receive come from Central and Eastern Europe. Even though intra-EU mobility is often discussed separately from immigration, since it is a movement within a single migration space, it is still true that receiving states and societies do not make this distinction – they often just count ‘foreigners’. And indeed, plenty of controversies have arisen around intra-EU mobility in Western Europe, most famously but not only in the context of Brexit. This is a particularly difficult terrain for Central and East European leaders to navigate also because sending states often have an incentive to sustain emigration, e.g., due to revenues from remittances or to keep unemployment low.

On the one hand, governments are called upon to defend their emigrants against backlash in receiving countries. On the other hand, they are increasingly pressured by their electorates at home to curb large-scale emigration. The response to date has been a mix of measures that disincentivise emigration and/or facilitate the return of emigrants.

To be sure, the politicisation of demography is not a Central and Eastern European specificity, but part of a broader trend. The idea that ‘western’ or ‘European’ or ‘white’ identity is under threat by large-scale immigration from less developed countries which will result in demographic ‘replacement’ seems to be gaining ground in many places, finding its audience mostly, but not only, on the far right fringe.

That said, preoccupation with national demographics is more mainstream and more resonant in Central and Eastern Europe, a region where brain drain and depopulation pose severe challenges. These challenges do call for well-designed policy interventions. Such policies should, however, aim to alleviate rather than amplify demographic panic, and should respect individual rights and autonomy rather than undermining them.