European Green Deal: A change of perspective from the Commission?

By Giovanni Simioni and Niccolo Donati

The “Just Transition” approach has gained traction in recent years. It can be best conceptualised not as a rival approach to “Green Growth”, insofar as it does incorporate the concept of Green Growth and many of its policy instruments.

Over the last few years, the scientific community has united in denouncing global warming. The increasing concentrations of greenhouse gases in the atmosphere will cause possibly irreversible modifications to our climate, leading to the deterioration of individual wellbeing on a mass scale. This has led the near majority of international actors to come together to devise a possible solution to the problem, which led, in 2015, to the signing of the Paris Agreement. Within this framework, the EU took the initiative, agreeing to reduce its emissions by at least 40% from 1990 levels by 2030, which was updated in 2020 to reach a 55% reduction by 2030.

More recently, however, some fault lines have started to appear in the “Green Growth” paradigm that had previously been dominant. The so-called “Yellow Vest” protests against the proposed increase in the French carbon tax shed light on the lack of attention given to the possible effects that a green transition could have on the most vulnerable in society. Many experts have agreed that one of the main factors leading to the protests was the design of the tax, which fell hardest on people outside of urban centres, while providing few resources to smooth the social impact: of the €34 billion raised by the tax, less than €4 billion has been devoted to help with this transition. Other than creating unequal and regressive outcomes, this approach has not been able to win public support, thus jeopardizing the implementation of necessary measures, such as carbon taxation.

A new paradigm has emerged as a result of these factors. This new framework has been called the “Just Transition” and takes into account social issues linked with the green transition and emphasising adequate response to the unequal impacts that the measures needed will have. A report by the International Labour Organisation (ILO) has highlighted that about 90% of emissions from production in the EU-25 stems from only 15 industries in which about 12% of the total workforce of the Union (24 million workers) is concentrated. The inequality that reconversion may cause would be felt not just across geographical lines, but also across socio-economic ones, as polluting industries tend to have a significantly larger share of low-skilled workers. These factors might cause a great number of people to be “left behind” and risks the creation of a backlash similar to that already seen regarding globalization in the last decade.

It thus seems salient and relevant to the debate on European social and environmental policy to understand whether or not decision makers in the EU have followed this change in perspective by adopting the “Just Transition” approach. We have therefore analysed the relevant speeches given by Jean Claude Juncker and Ursula von der Leyen during their tenure as Presidents of the European Commission and tried to determine whether the ideational shift from “Green Growth” to “Just Transition” has also informed the EU debate about global warming.

Green Growth and Just Transition: what is the difference?

The transition towards a green economy encompasses meaningful adjustment costs, due to the path-dependent models of economic growth characterising Western Europe. Changing our climate-altering path could offset the environmental costs of climate change in the long run, but they would involve short-term economic costs. The “Green Growth” approach provides an answer to these concerns: it strives to create economic growth while also preserving the environment. In terms of policy instruments, this perspective is based on regulatory settings to maximise the efficient allocation of resources, and it employs market-based instruments to get rid of externalities, making polluters internalise the costs of pollution. The issue of creating economic growth is addressed through the creation of new markets and jobs and an innovation policy, which would make new technologies feasible and profitable (OECD 2011: 5).

The “Just Transition” approach has gained traction in recent years. It can be best conceptualised not as a rival approach to “Green Growth”, insofar as it does incorporate the concept of Green Growth and many of its policy instruments. Rather, it integrates acknowledgement of the immediate and uneven social and territorial costs of adjustment; the “Just Transition” approach thus acknowledges the role of the public actor in providing compensation to those sectors and territories that are negatively impacted by the green transition. As such, this policy is context-specific: the public intervention must be tailored to the needs of the sectors and territories affected. Because it is not expected that green incentives and regulation will automatically translate into business opportunities and green jobs (ILO 2015), a strong emphasis is put on education and retraining to make the transition economically and socially feasible.

To trace how the EU debate on global warming has changed in recent years, we analysed the speeches by former European Commission President Juncker and current EC President von der Leyen during the period 2015-2020. We selected the speeches where global warming was explicitly addressed, creating a corpus of 34 speeches. We performed a frame analysis employing a coding scheme comprising 30 categories, which we aggregated into three distinct discourses: along with “Green Growth” and “Just Transition” narratives, we included categories (“multilateral discourse”) that refer to the role that the EU has, as a powerful international actor, in steering the decisions of other players towards a greening of their own economy. Table 1 displays the individual categories included in the three discourses.

The frame analysis was conducted on MAXQDA following the manifesto research technique: each speech was divided into quasi-sentences (i.e. sentences that can be turned into normative statements), and coded following the analysis-specific coding scheme. Only the parts of the speeches where climate issues were directly addressed formed part of the analysis.

Green Growth is good, but not enough

During the 2015-2020 period, climate change grew in salience. The number of references made by von der Leyen over just two years (2019-2020) of the mandate was more than double those made by Juncker during the 2015-2019 period. What interests us the most, however, is the way anti-climate change policies have been framed by the EC Presidents. 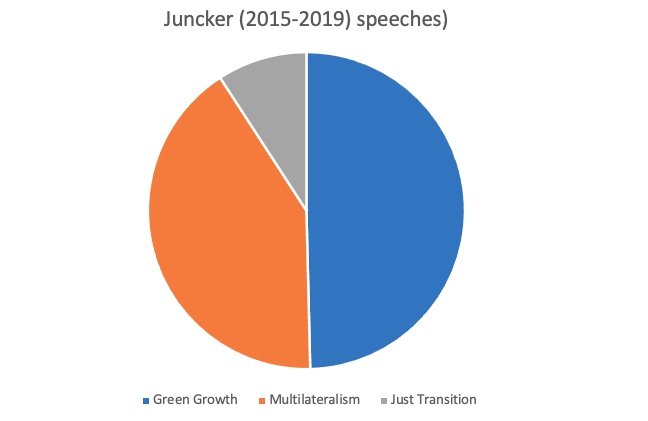 Figure 1 shows how the three discourses are distributed in Juncker’s speeches. There is a strong prevalence of “Green Growth” references, along with “multilateral discourse”. The “Green Growth” approach made up nearly 50% of the narrative adopted during the period 2015-2019. There were many references to how, “from 1990 to 2013, EU emissions declined 19% while GDP in parallel grew 45%” and to how the transition would spur growth and create new economic opportunities as “the myth that green does not give profit has now been thoroughly disproved”. Some strategies were given, such as “a strategic focus on innovation” and the call for “investments of up to 12 trillion euros in energy efficiency and low-carbon technologies”, but the content of the speeches tended to be quite vague, often calling for global cooperation without supporting any specific policy proposal. The role of Europe was often emphasised with statements like “I want Europe to be the leader when it comes to the fight against climate change”. References to the “multilateral discourse” made up over 40% of sentences regarding climate change, but saw a decline starting in 2017, which corresponded to the USA’s withdrawal from the Paris Agreement. Arguments specific to “Just Transition” were quite rare in Junker’s speeches, occupying just over 9% of sentences. It is interesting to see how, in the wake of the 2015 refugee crisis, the issue of climate migration was brought up a number of times. 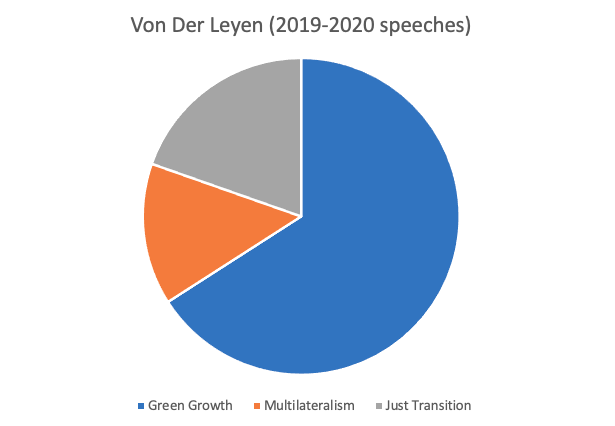 Figure 2 displays the content of von der Leyen’s speeches. “Green growth” still makes up 65.9% of von der Leyen’s references. This should come as no surprise, because many of the arguments used in the “Green Growth” discourse are also present in “Just Transition”. What changes under von der Leyen’s tenure is the fact that categories exclusive to the “Just Transition” approach are increasingly present and represent 19.6% of von der Leyen climate change discourse. The “Just Transition” thesis is directly mentioned and explained: “for this transition to work, it … has to be just for people. Nobody should be left behind”. This acknowledges the need “to support people and regions and companies that … have to come a longer way”, through “EUR 100 billion in investments” during the 2021-2027 period. These investments are both public, representing “at least 25% of the [EU] long-term budget”, and private, with the European Investment Bank Group responsible for “leverag[ing] the necessary public and private means”. Part of these funds will be invested in social policies to finance training and create the skills “for the jobs of tomorrow”. Unlike the “Green Growth” approach, “Just Transition” – as envisaged by von der Leyen – needs support from trade policies to create a level playing field for green technologies to take off: “if we want to incentivise fossil-free productions, we cannot accept that at the same time, carbon-heavy products are reimported from abroad”.

Conclusion: Green Deal, with a (strong) injection of social Europe

The analysis showed that, indeed, a change in the discourse regarding climate change took place at the EU level in the period 2015-2020. The “Green Growth” approach endorsed by former President Juncker tried to reconcile environmental and economic policy by having economic growth without damaging the environment. The experience of the last few years has shown that this approach risks underplaying the localised negative social impacts of a sustainable transition. The green discourse of EC President von der Leyen seems to have taken stock of this by integrating social policy in the mix. The next seven years will be crucial to understanding whether the “Just Transition” approach can ensure a smooth transition towards climate neutrality.