EU-related discussions in the Spanish elections: A Twitter study

Spanish electoral discussions in 2015 and 2016 displayed surprisingly little Europeanization. The only exception to this trend was the Brexit issue, whose effects on the Spanish vote, however, remain unclear.

On June 26, 2016 new general elections took place in Spain, after the previous ones, held on December 20, 2015, resulted in a hung parliament unable to form a government coalition. Both elections have taken place against a problematic social and economic backdrop. Spain has been one of the countries worst hit by the euro crisis, receiving special EU financial assistance in 2012 to recapitalize its banks, and implementing austerity policies resulting in a dramatic rise of unemployment, which remains stubbornly above 20%. Spain’s economic predicament, together with the lack of trust in the two main parties—“PPSOE”, as they are often renamed, merging the acronyms of the centre-right Popular Party (PP) and the Socialists (PSOE)—and the widely held view of the European Union as a neoliberal project, have favoured the rise of the anti-establishment party Podemos, a movement that challenges both the Spanish and EU political élites, demanding a more social Spain in a more social Europe.

As a way to gauge the importance of EU-related issues in the 2015 and 2016 Spanish elec-tions, we have analysed discussions taking place on Twitter during the two electoral cam-paign periods. Starting 15 days before the two election days, we collected all tweets contai-ning the official hashtags of the two campaigns: respectively #20D for 2015 and #26J for 2016. Overall, this collection resulted in a dataset of 617,846 tweets for the 2015 elections and one of 925,212 tweets for the 2016 ones. While by no means exhaustive of the online—let alone offline—electoral debate, these datasets nonetheless can provide us with a quick and reliable first picture of the topics discussed by Spanish voters in the run-up to the elections.

This seems to suggest a rather shallow mode of Europeanization, in which big events like the UK referendum are able to capture the voters’ attention, while less sensational, more longstanding, but equally important issues do not feature prominently in the electoral debate.

To measure the salience of European issues, we extracted from the starting datasets all tweets matching a list of EU-related keywords (such as Europe, European, European Parliament, European Commission and several others). Generally speaking, and contrary to our initial expectations, EU-related issues turned out to not to be particularly salient in either electoral campaign: tweets matching our keyword list amounted to 0.6% (3,442) of the #20D dataset and 0.7% (6,627) of #26J dataset. At least prima facie, this is consistent with Sofia Perez’s recent observation about the virtual absence of a serious debate on European (and Eurozone) issues from the main parties’ electoral campaigns ahead of the latest elections.

A partial exception to this trend was the Brexit case, which generated a massive amount of tweets in the short period between June 23 (the date of the UK referendum) and June 26. As explored more in detail below, the number of tweets containing the single keyword “Brexit” and sent over that brief window of time was higher than the number of tweets containing all EU-related terms in the 15 days prior to June 26. This seems to suggest a rather shallow mode of Europeanization, in which big events like the UK referendum are able to capture the voters’ attention —note that practically all Brexit tweets were sent after the referendum itself—while less sensational, more longstanding, but equally important issues do not feature prominently in the electoral debate.

What did tweeters talk about?

We calculated term frequency from each of the two sets of EU-related tweets (one for 2015 and one for 2016) in order to detect the most frequents themes of discussions. The two tag clouds below display the outcome of our analysis, after removal of stop-words, common terms and collecting keywords such as “Europe” and “European Union”. 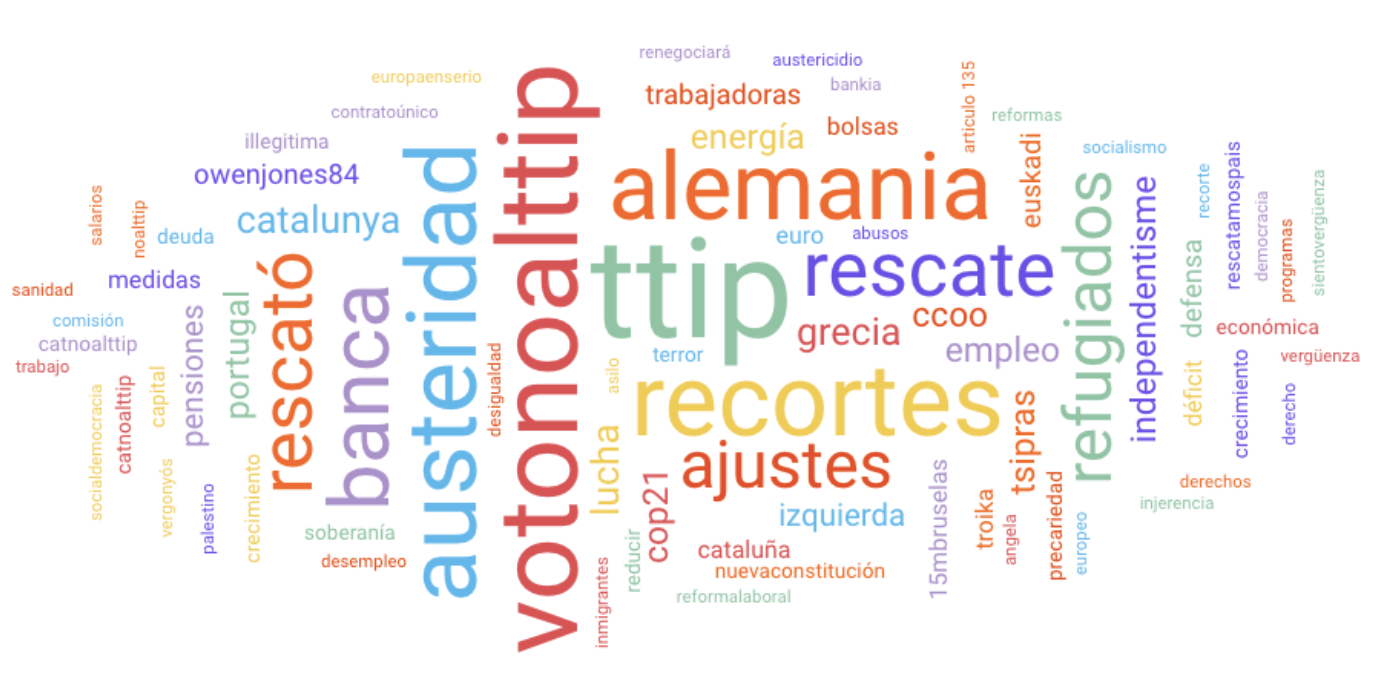 Four themes seem to have dominated the 2015 electoral discussions revolving around the EU: first, the austerity policies carried out by the centre-right government led by Mariano Rajoy, about which conversations were largely negative, highlighting the adverse effects of the adjustments imposed by the “Troika”—and, indirectly, by Germany (“Merkel”, “Alemania”)—on the Spanish welfare system (“austeridad”, “recortes”, “ajustes”, “pensiones”, “educacion”, “austericidio” “articulo 135”). While most of the austerity debate was focused on criticizing its underlying ordoliberal model, a subsection of it also targeted the narrower issue of the role played by Rajoy and his crony Rodrigo Rato—at the time president of the financial group Bankia and subsequently accused of fraud—in the Spanish banking crisis. Finally, a minor but significant component of the debate criticized the anti-austerity Podemos and its leader Pablo Iglesias, accused to prepare for the country a future similar to Greece under the leadership Syriza (“Grecia”, “Tsipras”).

In addition to the dominant austerity theme, three topics emerge from the analysis of the #20D discussions: the opposition to the Transatlantic Trade and Investment Partnership (#TTIP, #votonoalttip), largely perceived as an attack on democracy; a discourse of solidarity vis-à-vis the refugees flowing into the European Union, often accompanied by criticism of the way in which member states and EU institutions have dealt with the issue; finally, a cluster of tweets on the topic of Catalan independence.

As the second word cloud shows, the 2016 EU-related electoral debate on Twitter had an analogous composition to the 2015 one, with two important variations. The first was a dramatically increased importance of the refugee issue, which here included also a discussion of the controversial agreement between the EU and Turkey (“Turquía”). The second was the issue of Brexit, which we discuss in the next section.

Brexit and the Spanish elections

As mentioned above, the outcome of the UK referendum on exiting the European Union had a visible impact on the electoral debate in Spain, generating over two days a massive—at least in relative terms—wave of tweets. To examine this aspect of the data more closely, we ran an additional analysis on the starting datasets identifying all tweets matching the keywords #Brexit and Brexit (which were not included in the initial EU-focused search). This resulted in the isolation of an additional sub-sample of 8,492 tweets, 8,004 of which sent after June 23, the day of the referendum.

The link between Brexit and Podemos emerging from Twitter does not necessarily confirm the hypothesis, made by several commentators, that the former scared away voters from the latter.

The following chart shows the temporal distribution of Brexit tweets compared to the rest of EU-related tweets. 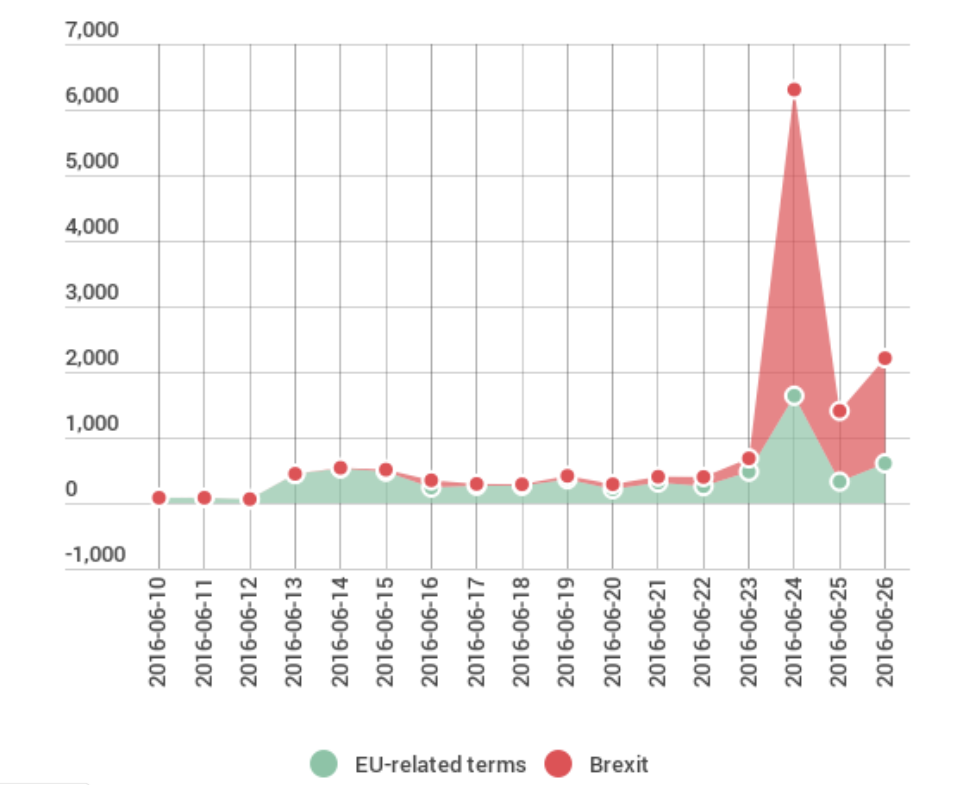 To analyse the content of the Brexit-related debate in greater detail, we extracted the hash-tags most frequently associated with the Brexit sub-set. Results are displayed in the word cloud below. 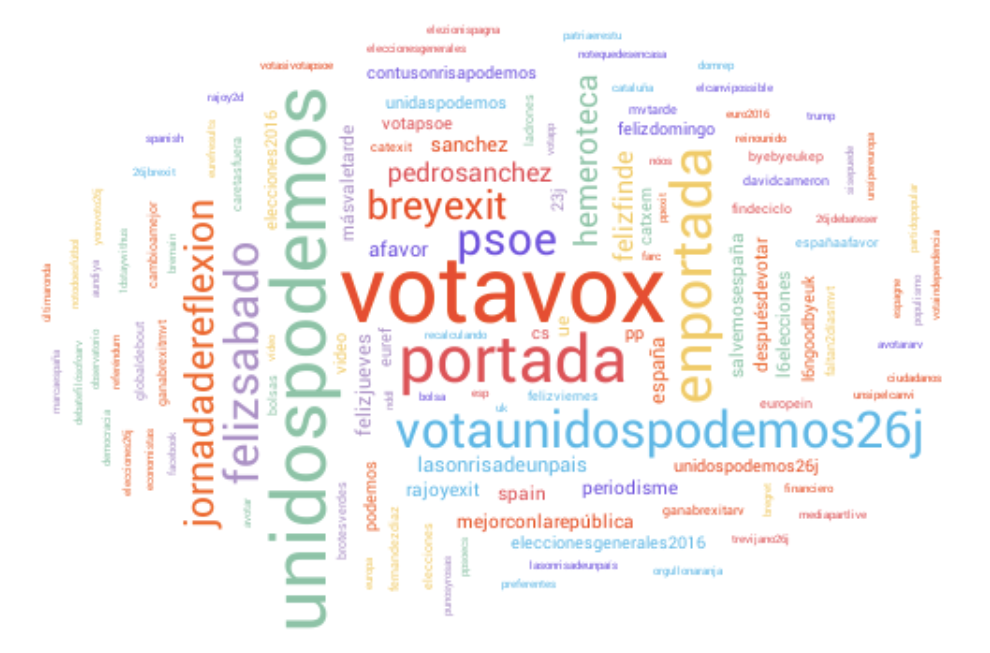 As the image suggests, Unidos Podemos (the electoral coalition between Podemos and the radical leftist party Izquierda Unida) was among the subjects most often associated with the issue of Brexit. This has no doubt to do with Podemos’s critical stance on the EU. It is important to note, however, that the link between Brexit and Podemos emerging from Twitter does not necessarily confirm the hypothesis, made by several commentators, that the former scared away voters from the latter. On the contrary, the content of these tweets reveals the visible presence, if not prevalence, of a pro-Podemos discourse among users, who saw the adoption of the “constructively Eurosceptic” agenda promoted by Iglesias’s party—aimed at making the EU more democratic and solidaristic—as the only way to avert the more radical sort of Euroscepticism that led to the Brexit vote.

The Euroscepticism connection also explains the incidence, among the Brexit tweets, of the hashtag #votavox, which refers to the tiny extreme right-wing party Vox. Used 678 times, this was the one hashtag most often associated with Brexit—an impressive performance, considering that the hashtag appears a total of only 1,686 times in our two overall datasets (by way of comparison, #unidospodemos appears almost 40,000 times). Vox’s importance in the Brexit tweet set was boosted also by the arrest of one of its leaders, Nacho Minguez, on June 20 for unfurling a giant Spanish flag on top of the Rock of Gibraltar.

«through providing the most vulnerable individuals with both income and employment support, more generous social protection systems not only help mitigate unintended inequality in social investment outcomes, but also tend to fend off the risk of workfare for those who enter employment. »