Emigration in Eastern and Southern Europe: the awakening giant

Governments in Eastern and Southern Europe struggle to reverse emigration. Will emigration become the new big political issue in the region?

Immigration has become one of the defining political issues of our time. In advanced industrial economies immigration is talked about every day, dividing people along attitudinal lines, and often provoking intense political conflict. It is therefore hardly surprising that academic research and public commentary has focused so much on understanding the link between immigration and politics.
However, this focus on immigration, i.e. incoming migration, has become so commonplace that it has obscured the political relevance of other perspectives on human mobility. For example, while countless opinion polls document people’s thoughts about immigration, few if any, inquire about its flipside, emigration. Yet, when asked, respondents reveal truly startling opinions about this, too. A survey commissioned by the European Council on Foreign Relations (ECFR) and conducted by YouGov has shown that outward migration constitutes a matter of deep concern in many EU countries, in some instances even more so than immigration (Figure 1). 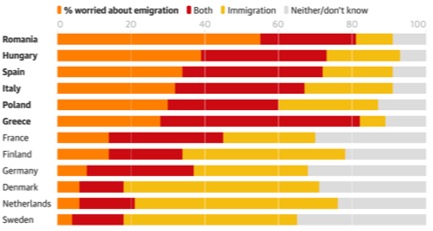 To a large extent, people’s worries about emigration are associated with the rates of outward movement: the higher the absolute number of emigrants, the deeper the concern with emigration in their home countries. Take for example, Romania: according to the OECD, between the early 2000s to 2016, Romania’s emigrant population in high-income economies (mostly but not only other EU member states) increased by 2.3 million, reaching a total of 3.6 million people, or approximately 17% of the native-born population. Is it, then, surprising that the issue has become salient there? 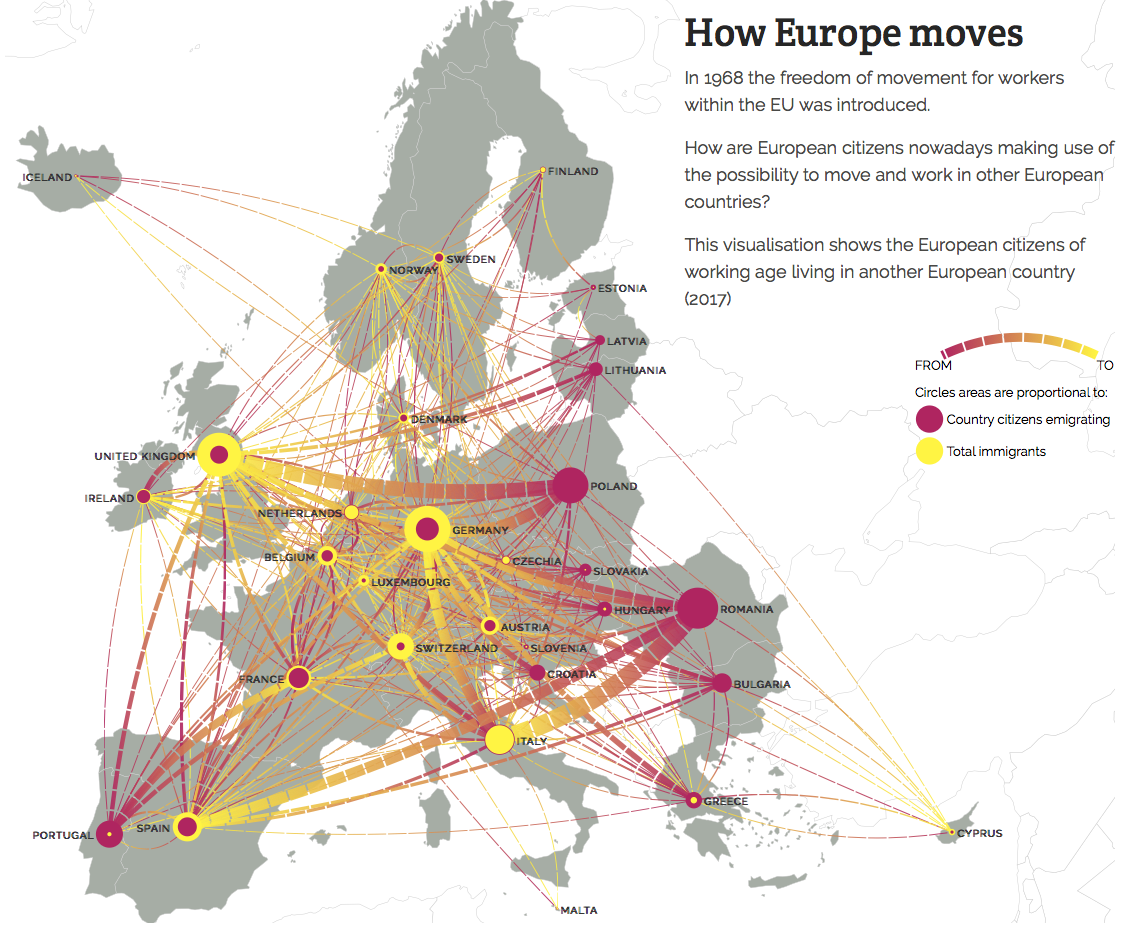 The majority of these movements happen within the EU, which constitutes a single migration space, and where sizable socio-economic differences between the member states translate into specific mobility patterns: from East to West and South and from South to North (Figure 2). The economic crisis has also played a role, especially in the hardest hit Southern European member states. In Greece, for example, emigration skyrocketed in the early 2010s and has remained high since (Figure 3).

Governments of affected states have turned their attention to the issue of emigration. One prevalent policy instrument is the implementation of programmes which provide economic incentives for emigrants’ return. Portugal, for instance, adopted the Regressar programme in 2019, which offers tax reductions, covers relocation costs, and aids the re-registration of professional qualifications for former residents who have lived outside Portugal for three years or more.
Many such measures are tailored for specific population groups, typically young and/or high-skilled people. The Greek government instituted the Rebrain Greece programme, also in 2019, to lure back highly-qualified emigrants, promising to pay 70% of their salaries of up to 3000 euros per month for one year. (Greece also passed a law on the expatriate vote in December 2019, facilitating the electoral participation of the country’s 400,000-large diaspora.) The Polish government aims to reduce emigration rates by helping low-income young people under the age of 26, who, since the Summer of 2019 are exempt from paying income taxes.
It is too soon to tell if these policies will be sufficient to reverse the tide of emigration. It is also unclear if governments are actually motivated to introduce robust interventions in the first place. For example, Romania, Bulgaria, Hungary and Poland have some of the highest rates of skill shortages in the EU; adverse demography and depopulation are also a problem there and projections look dire. At the same time however, migrant sending countries enjoy very high rates of remittance from abroad: in 2019 Romania and Bulgaria received 1 billion euros each in remittances, Spain 3 billion.
That being said, it appears that citizens of sending countries would support even more radical measures than the ones introduced. The aforementioned ECFR survey has also found that approximately half of the respondents in Spain, Greece, Italy, Poland and Hungary favour some type of emigration controls. The significance of this finding cannot be overstated: bans on citizens’ outward movement are rare in liberal democracies (the COVID crisis is the exception that proves the rule). 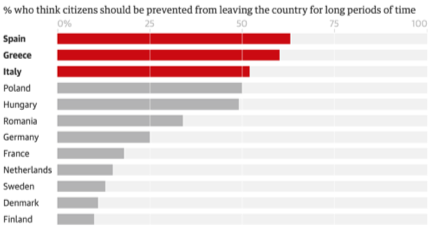 In this context it is quite puzzling why the issue of emigration has not reached similar levels of politicisation as immigration. Perhaps it is only a matter of time until a tipping point is reached. Another factor may be that by removing themselves from their homelands, emigrants are also less able to articulate their political preferences and mobilise in order to trigger a response by the political leadership. In the absence of this constituency, political entrepreneurs therefore have minor incentive to take up the issue. Opposition parties may find it useful to point to the phenomenon of emigration in order to criticise government, portraying large-scale emigration as a failure. Yet, there are limits to this criticism in that it could alienate voters by implying that emigrants were somehow blameworthy for choosing to leave.
In fact, in public discourse emigrants are often described as victims and emigration as a loss for both the individual as well as the community. Emigrants are by rule imagined as young, hardworking people in search of a better life. Their agency is limited: they are the victims of their circumstances, pushed away by unemployment or poverty.
But even though this narrative may fit some migration experiences, it is, nonetheless quite one-sided. We know that people move for a variety of reasons, including economic considerations, but also due to the prospect of new adventures or to gain greater autonomy. Lopsided focus on the young and the educated leaves out of the picture low-skilled and unskilled workers who, of course, make up a large portion of movers too, but also older people, people of minority background, etc.

Implications for the EU

The latent appetite for emigration controls is bad news for the EU. Not only is freedom of movement one of the cornerstones of the single market, but also, most EU citizens equate the union with ‘the freedom to travel, study and work anywhere in the EU’ – a constant finding of successive Eurobarometer surveys. Eastern and Southern Europeans have for long been the cheerleaders of intra-EU movement. That this narrative is now shifting brings into sharp relief the fact that many people confront uninhibited geographic mobility (immigration, emigration or both) with increasing unease.
At the same time, emigration policies face a delicate trade-off: on the one hand, they must respect individual autonomy and freedom as well as reap the rewards of mobility. On the other hand, they cannot ignore the negative externalities, especially since these tend to concentrate in specific social or geographic locations. While targeted return policies and tax breaks can be part of the response, it is hard to see how these policies in and of themselves can balance population movements in the context of large and persisting inequalities between EU member states.

By Anna Kyriazi and Niccolo Donati

As the Brexit process has finally concluded, this post goes back to the beginning asking why the EU has established the right to unilateral withdrawal, in the first place?

Towards a Next Generation EU for an inclusive recovery?

The Next Generation EU represents a unique opportunity that must be seized in order to guarantee a fair and inclusive recovery that meets citizens’ expectations. The design of the national recovery strategies and their implementation is essentially what will determine the fate of the Next Generation EU initiative.

Myth: Europe is in need of a “Finalité Politique”

A finalité politique is at odds with the nature of European integration. There is no end goal, and that is how it ought to be. By definition, the Europe of European integration is a volatile and hybrid institution, a temporary fix. A temporary fix that has to prove itself as an appealing and convincing version of that big post-war Western experiment with capitalism and democracy. Capitalism and democracy the European way, if you wish. Key to its attraction is that is never set in definite form, nor believes in such a thing.

Reforming the Dublin Pact and Activating EU Solidarity: The Objectives of the New EU Pact on Migration and Asylum

The increase in migratory flows towards the European Union (EU) during the 2014–2016 period was followed by a genuine political–institutional crisis and the paralysis of the Common European Asylum System. In 2020, the European Commission presented the New Pact on Asylum and Migration, a composite policy instrument that promises to deeply reform the common asylum policy.

«Our results show that 59% of the tweets sent after Macerata by the 2,478 users who have retweeted Luigi Di Maio in the past two months have been classified as ‘pro-closure’»