The 2018 Italian election, held on March 4th this year, resulted in a hung Parliament and left Italy at a political standstill with no easy way out. As we discussed in a previous article the centre-right coalition consisting of former Prime Minister Silvio Berlusconi’s Forza Italia (FI) and its ally, the far-right League (Lega), emerged with the biggest share of votes. The anti-establishment 5 Star Movement (M5S) became Italy’s most significant single party with around 31% of the vote. The ruling centre-left alliance came in third, with Matteo Renzi’s pro-European Democratic Party (PD) obtaining a modest 19% of votes.

Two months after election day, a government between the 5 Star Movement and the League seems finally on its way. Nevertheless, the stability of any national coalition Government remains weak as all main parties – M5S, PD, League and FI – appear to be divided over many strategical issues. For instance, Italy’s position in Europe remains particularly uncertain.

In our research on EU politicisation in national elections, we monitored the salience of Europe in the latest Spanish, German, French and UK elections. After the UK – where Brexit played a greater role in shaping the online debate – Italy has emerged as the country in which EU-related issues have been debated the most

To get an overview of the stance different political parties have on Europe and the extent to which European integration was politicised in the run-up to the 2018 elections, we followed the online activity on Twitter of all candidates from the six major parties – the far-right Brothers of Italy, the League, Forza Italia, the 5 Star Movement, the Democratic Party and the left-wing Free and Equal – as well as the reactions from citizens (in the form of retweets and replies) from February 19th up to election day.

Overall, we were able to follow 1,591 candidates on Twitter. However, only 979 of them actually tweeted in the period we covered. We collected 43,921 tweets sent by the 979 candidates and the reactions to those tweets, obtaining a total of 514,189 tweets sent by 67,337 users.

To understand to which extent EU-related issues have been debated in the online campaign, we built a dictionary of EU-related keywords, including both an initial list of ‘generic’ keywords referring to the EU and its institutions (Europ*, Euro, Schengen, Juncker …) and terms related to the country-specific debate on European integration that were frequently mentioned in EU-related conversations, such as ‘#stopeuro’, ‘Triton’, ‘eurocracy’ and so on.

Candidates from different political groups dedicated a different amount of attention to issues related to European integration. League’s candidates were among those most willing to politicise Europe in their tweets (4.92%), followed by Democratic candidates

Overall, politicians and citizens discussed EU-related issues in 4,71% of their tweets. If it is indeed difficult to interpret such a result per se (does 4.71% point to a high or low level of salience?), the relevance of conversations around Europe in the Italian campaign appears high when comparing it with results from other election campaigns. In our research on EU politicisation in national elections, we monitored the salience of Europe in the latest Spanish, German, French and UK elections. After the UK – where Brexit played a greater role in shaping the online debate – Italy has emerged as the country in which EU-related issues have been debated the most. Interestingly enough, in most countries, the salience of tweets related to European integration was higher in tweets and retweets sent by citizens than in those sent by their leaders. In Italy, EU-related tweets make up 3.16% of leaders’ tweets compared to 4.85% of citizens’. 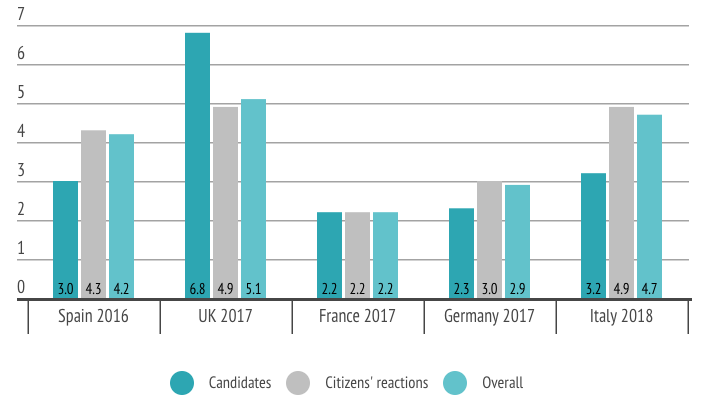 Moving on to parties, we measured the selective salience that candidates accorded to Europe as the share of ‘EU-related tweets’ in overall campaign conversations. Results are displayed in Figure 2. As we can see from the figure, candidates from different political groups dedicated a different amount of attention to issues related to European integration. League’s candidates were among those most willing to politicise Europe in their tweets (4.92%), followed by Democratic candidates (3.6%). On the other hand, EU-related issues were less politicised by candidates from the 5 Star movement and Free and Equal. 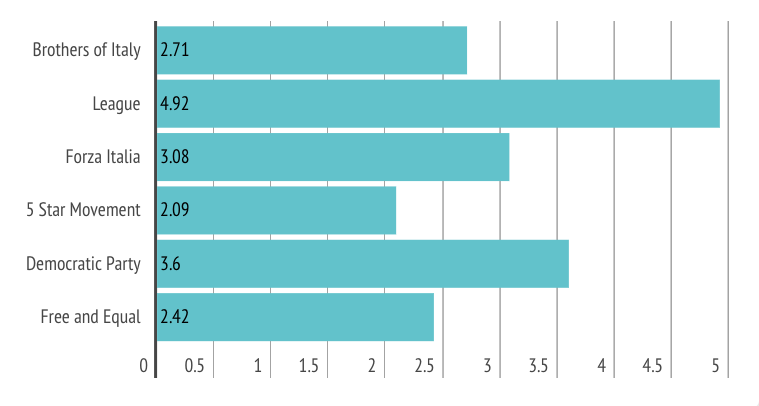 To understand the position of candidates on Europe, we built a first algorithm by means of natural language processing (NLP) to separate ‘attitudinal’ tweets from news recast or descriptive tweets. We then built a second one to identify ‘critical’ tweets from our sample of attitudinal tweets. It is important to clarify that for the purpose of this study we adopted a rather broad definition of ‘critical tweets’, including both ‘hard’ forms of criticism – tweets manifesting a principled opposition to the EU and European integration, calling for Italy’s withdrawal from EU membership or from the common currency – and ‘soft’ ones, where there is no principled objection to the EU but rather an opposition to the Union’s current or future planned trajectory, or where concerns about one or more policies have led to the expression of a qualified opposition to the EU.

Critical opinions prevail in tweets sent by candidates from the 5 Star Movement (64.9%) and the left-wing Free and Equal (56,2%) party. However, their attitude is less homogeneous than that displayed by far-right candidates: while the latter seem to agree in their eurosceptic stance, 5 Star and Free and Equal candidates appear more divided in their position

Interestingly enough, the overall majority of tweets expressing an attitude towards the EU turned out to be critical (61%). Our results show that citizens tend to tweet about the EU mainly to criticize it (61.9%), while such a trend is less pronounced amongst candidates, with critical tweets being limited to 45.5%. However, not surprisingly, parties differ significantly in the extent to which they criticise the EU in their tweets. Figure 3 displays the percentage of ‘critical tweets’ vs. the EU by party. 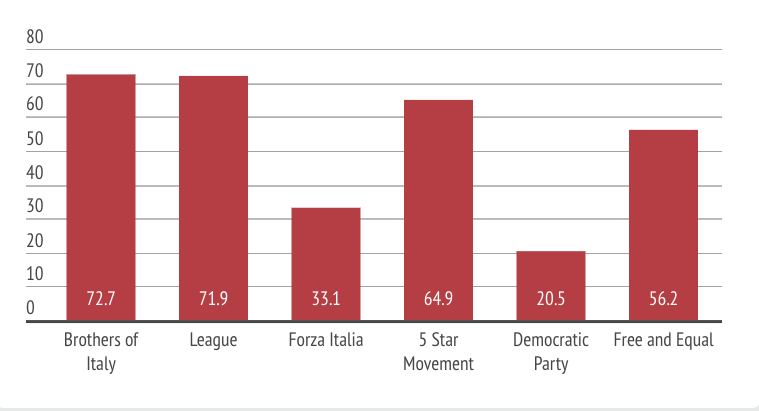 Parties’ level of criticism vs. the current state of European integration

As we can see from the figure, candidates from far-right parties like Brothers of Italy and League have been by far the most critical, denouncing the EU in 7 tweets out of 10. From a qualitative point of view, EU-related tweets sent by far-right candidates often come with ‘hard’ forms of criticism – calling for Italy’s withdrawal from the EU and/or from the common currency – and often use a ‘take sovereignty back’ rhetoric. Critical opinions prevail in tweets sent by candidates from the 5 Star Movement (64.9%) and the left-wing Free and Equal (56,2%) party. However, their attitude is less homogeneous than that displayed by far-right candidates: while the latter seem to agree in their eurosceptic stance, 5 Star and Free and Equal candidates appear more divided in their position, with only a slight majority of their candidates tweeting about the EU to criticise it. A second difference with far-right parties is the type of opposition put forth by 5 Star and League candidates, whose attacks mainly address, respectively, the ‘elitist’ and neoliberal character of the EU. On the contrary, criticism towards the EU is rather limited in messages sent by Forza Italia (33.1%) and Democratic candidates (20.5%). Democratic tweets, in particular, are the only ones that see an emergence of pro-European messages. The Democratic Party (PD) presented itself as the ‘only alternative’ to the anti-European populism and the sovereignist closure that characterizes its competitors.

The goal of this study was to shed a light on the way in which EU-related issues have entered the 2018 Italian electoral campaign on Twitter. Overall, we saw that Italian candidates have a tendency to bring the EU into debate more than candidates running for Parliament in other European countries, except for the UK.

We have further measured the selective salience of the topic amongst different parties and assessed the overall level of ‘criticism’ vis-à-vis European integration for each of them. In the study of EU politicisation so far, there has been an overall agreement in considering eurosceptic parties as the ones having the most strategic incentives in politicising EU-related issues. In terms of communication strategies, these parties would thus be expected to be the ones (i) mostly inclined to speak about the EU (salience) and (ii) most likely to criticise the EU in their tweets. While this hypothesis was confirmed, the same cannot be said when it comes to salience. Among the parties more inclined to including Europe in their communication strategy, we actually found both pro and anti-European parties. If it is true that League’s candidates are the ones who tweeted about the EU the most, pro-European Democratic candidates also proved very likely to debate EU-related issues. A similar finding emerged from our study on the 2017 German election campaign, where ‘mainstream’ parties such as Merkel’s CDU and the SPD led by Martin Schulz were the ones fueling the discussions on Europe. On the contrary, in the Italian election campaign, EU salience turned out to be particularly low in tweets from parties – 5 Star and Free and Equal – who expressed a more nuanced position towards the EU. Such a finding suggests that parties internally divided in their stances on Europe are the ones who have tended to de-emphasise such topics in their online campaign, the opposite being true for candidates with a strong position – either positive or negative – on the issue.