The labour market reform introduced by Matteo Renzi’s government in 2015—the so-called Jobs Act—relates to specifically Italian controversies over the level of protection for employees against arbitrary dismissal. It also fits with the focus of recent European Union policy-making, presented by European commission President Jean-Claude Juncker as being based on three pillars: investment, structural reform and fiscal responsibility. These, it was claimed, would work together to bring economic recovery and growth. In fact, fiscal responsibility has been interpreted, as before, with such rigidity as to constrain investment and growth. An EU investment plan, heralded as bold and ambitious, amounts to no more than allowing the European Investment Bank to continue the same level of credits that were granted in the years 2013-2015, as is indicated in its Operational Plans. Reviving investment depends on higher public spending and higher private demand, both identified by the Organization for Economic Cooperation and Development (OECD) as factors that have increased, or can increase, growth in, among other countries, Italy. Indeed, as also recognised by the OECD, it is by restoring growth that levels of public debt can be reduced.

Within the structural reform category, much of the emphasis has been on labour market reforms, amounting to reductions in employee protection and in scope for collective bargaining. Italy is no exception with the Jobs Act winning praise for allegedly already helping to increase employment. Other reforms, advocated by the EU and in parallel by the OECD, largely remain “ongoing” or still “to do”.

The popularity of this kind of reform does not reflect strong evidence that it will lead to any significant benefits. Academic and policy-makers’ interest in the theme really took off in the 1990s around arguments that higher employment protection was linked to higher unemployment in Europe than in the United States. Econometric studies mushroomed with the development of the OECD’s Employment Protection Legislation (EPL) index, a synthetic indicator derived from assessment of 21 elements of legal protection against individual and collective dismissal and of restrictions on the use of temporary employment. The indicator has been strongly criticized. It does not take account of variations in enforcement of laws, of differences in the applicability of laws—less than half of employees in Italy and Spain are in large enough workplaces to have the maximum legal protection—and in employment protection derived from other laws, contracts or from collective bargaining.

Nor is it intuitively obvious that employment protection should have negative consequences for employment. It could also protect jobs in times of economic difficulty.

Nor is it intuitively obvious that employment protection should have negative consequences for employment. It could also protect jobs in times of economic difficulty. The argument that it is harmful relies on the assumption that employers will be less willing to take on employees in good times if they cannot be easily dismissed should times turn bad. Thus there are two opposing tendencies with no indication as to which will be the stronger or as to whether either of them will be particularly important. Empirical evidence, typically using the OECD’s EPL index, seemed at first to support the second hypothesis, but more studies including more countries and time periods have demonstrated the absence of any significant relationship. The OECD has been led to conclude that the impact of EPL on employment levels “is at best minor”. Attempts to demonstrate a relationship have continued, but based on comparisons of small numbers of countries and without taking account of all the other factors that may explain differences between them.

Two additional themes have been developed to support the view that employment protection has negative economic consequences. The first is a postulated effect on productivity by restricting labour mobility. This too could work either way, with job protection helping to protect inefficiency or with job protection supporting stable labour forces and encouraging the acquisition of skills. Academic studies do not give clear results and there is little reason why they should. Overwhelmingly, labour mobility reflects voluntary job movement and is greatest in periods of high demand, when opportunities are expanding. Job separations due to individual dismissal are a tiny proportion of the total and therefore a very small influence on overall labour mobility.

The second additional theme is a claim that employment protection increases labour market segmentation. Here the argument is that protecting permanent contracts encourages employers to make greater use of other forms of employment relationship, so that they can dismiss part of their labour force more easily should they so wish. This has been taken up in EU policy advice with the assumption that segmentation is meaningfully expressed in the distinction between permanent and fixed-term contracts, both easily accessible from Eurostat data. However, this is not a satisfactory measure of segmentation which should take account of other forms of non-standard employment such as part-time work, bogus self-employment, the use of commercial instead of employment contracts and casual employment with no formal contract. These do at times seem to be substitutes.

Growth in […] segmentation […] was not a consequence of higher protection for regular employees—which did not change in this period—but of laxer rules for non-standard contracts. That made them more attractive to employers than permanent contracts and reduced the advantages of avoiding a formal contract altogether.

Following the EU’s favoured measure, it is clear that the share of fixed-term contracts varies widely across EU member states, with the highest figures in Poland and Spain and the lowest in the United Kingdom and Estonia. Italy is around the middle. Past growth depended on changes in labour law to ease their use. That was the case in Italy and was followed by an increase in recorded employment over the period 2001-05, much of which may have reflected regularization of migrants rather than new job creation. At the same time, as shown in an ETUI working paper, use of non-standard contracts became more widespread among younger employees. This growth in measured segmentation, it should be noted, was not a consequence of higher protection for regular employees—which did not change in this period—but of laxer rules for non-standard contracts. That made them more attractive to employers than permanent contracts and reduced the advantages of avoiding a formal contract altogether.

Nevertheless, the European Commission has used the share of employees on fixed-term contracts as its indicator for segmentation and has sought to prove causation from high protection of permanent contracts. The figure below adapts from their Employment and Social Developments in Europe 2014 report to show the share of temporary jobs set against the EPL index for individual and collective dismissals for regular contracts. There is no significant relationship. In fact, any relationship at all almost completely disappears when the UK, already set to leave the EU, is excluded. 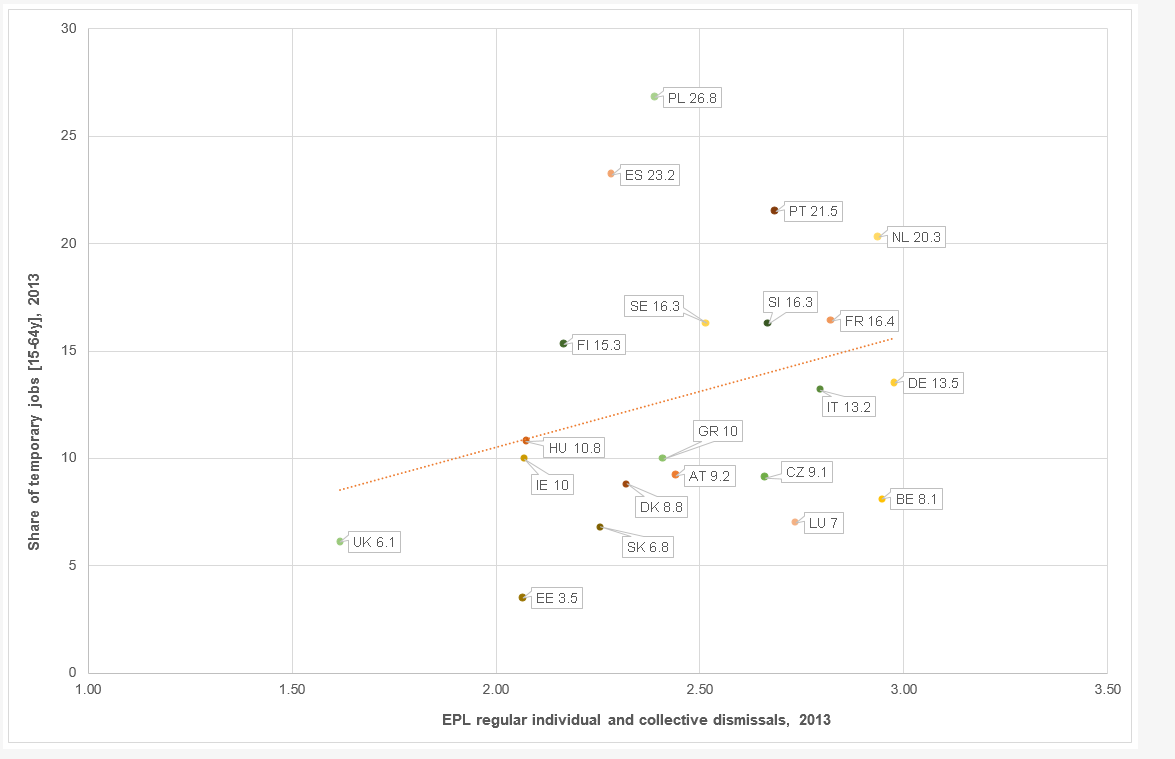 Figure 1: EPL index on regular employment, including collective dismissals, and the share of temporary employment

European Commission publications do acknowledge that the results of policy changes have not reduced segmentation, measured by their chosen indicator. As they correctly conclude in their Employment and Social Developments in Europe 2014 report, other drivers “appear to have a higher relevance”. Here they refer to active labour market policies, lifelong learning and the structure of benefits.

Nevertheless, advice continues to be given that cutting protection on permanent contracts will help to reduce segmentation and to revive employment. Remarkably, such advice is given only to countries that have other economic difficulties and not to those which, as the figure indicates include Germany and the Netherlands, have high measured employment protection but an economic performance that is judged satisfactory. The line of reasoning seems to be that if a country experiences high unemployment or high degree of segmentation, then the cause must be employment protection, even if the measured level is not particularly high.

Poland can serve as an example. The high share of temporary contracts reflects employers’ preferences that they can impose under conditions of high unemployment. Employees have little choice but to accept conditions that they are offered. The widespread use of extreme forms of casualization in Poland has brought criticism from the European Commission, but they could still present the argument that “rigid dismissal provisions, long judicial proceedings and other burdens placed on employers encourage the use of fixed-term and non-standard employment contracts”. No evidence is provided for this.

In fact, the EU’s assessments of member states’ economic performance, and also OECD commentaries, raise many themes of much greater importance than the ease of dismissing those on permanent contracts. Using Italy as an example, the OECD starts its review with a reference to “reducing labour market duality” and optimistically claims that positive results from the Jobs Act are already beginning to pay off. However, it acknowledges continuing problems, for example, in the country’s banking sector, in generally low productivity, in low infrastructure spending, low research activity, low skill levels, poor training provision and the increasing incidence of poverty. The EU’s assessment mirrors these criticisms, pointing also to poor levels of child care provision, weak active labour market policies and very poor levels of higher-education provision and adult learning.

The kinds of labour market reforms pressed in recent years with such enthusiasm are much simpler, requiring no public spending and no serious strategic thinking from governments.

All of these are areas are likely to require public spending and serious planning of provision. The kinds of labour market reforms pressed in recent years with such enthusiasm are much simpler, requiring no public spending and no serious strategic thinking from governments. Unfortunately, they make effectively no positive contribution to solving the current problems of Europe’s economies and societies.

This article is part of a EuVisions symposium on Italy’s 2015 labour market reform package, known as the Jobs Act.