On 20 February, during his first visit to Brussels, the Vice President of the United States, Mike Pence claimed that America would continue cooperation and partnership with the European Union. “Whatever our differences, our two continents share the same heritage, the same values and above all the same purpose, to promote peace and prosperity through freedom, democracy and the rule of law, and to those objectives we will remain committed”, Pence said during the press conference at the European Commission. This declaration widely contrasts with Donald Trump’s anti-EU rhetoric.

To examine the reactions to Pence’s claim online, from 18 to 24 February we collected all tweets containing the keyword “Pence” and the keyword “EU”, for a total of 21,509 tweets. Then, by means of location estimation, we annotated 8,777 tweets as written from the US and 4,592 as from the EU, for a total of 13,369 tweets. We then looked at the time distribution of these two subsets.

As Figure 1 shows, both the American and the European Twitter debates peaked on 20 February, the day of Pence’s visit. Moreover, the online discussion in the US peaked on 21 February, when Reuters published news about a meeting between White House Chief Strategist Steve Bannon and Germany’s ambassador to Washington; and on 23 February, when many online journals published this report.

According to Reuters, a week before Pence reassured EU leaders about American intentions, Bannon pointed out to the German ambassador that he considers the EU a “flawed construct” and that US policy will be one of “hostility towards the EU”. These declarations further confused online public opinion, especially the US one, about the stance of Trump’s administration towards the EU.

Here are the most retweeted tweets, located in the US and containing the word “Bannon”.

Another interesting aspect, emerging from the analysis of the subset of tweets located in the EU, is the way the opinions expressed on Twitter seem to change, depending on whether the users are institutional or not.

We identified the top three institutional and non-institutional users whose tweets were the most favourited among those that expressed a sentiment about Pence’s visit to Brussels. 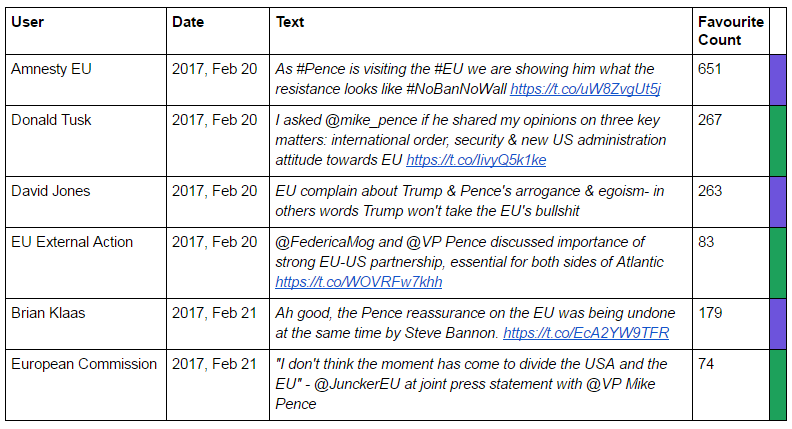 As shown above, institutional users tended to express positive opinions about the meeting with Pence, while associations or individual users seemed to be more sceptical about the possibility of a reconciliation between the EU and the US.

Moreover, looking at the number of likes that every tweet received, we note that non-institutional users’ tweets were more appreciated than institutional ones.