A network analysis of #eppresident

In a recent article we have analysed the race for the European Parliament’s Presidency as seen on Twitter, looking at all tweets mentioning one of the candidates between January 4 and January 14. In that period, ALDE leader Guy Verhofstadt emerged as the most popular candidate—although many of the tweets mentioning his name were quite critical of his recent decision to negotiate the Eurosceptic Five Star Movement’s membership of ALDE—in the context of an online discussion involving to a great extent the so-called Brussels bubble.

To gain further our understanding of the nature, public(s) and actors involved in the online debate around the EPP President’s election, from January 8 to January 18 we collected all tweets containing the hashtag #eppresident. The graph below shows the frequency of these tweets over time. 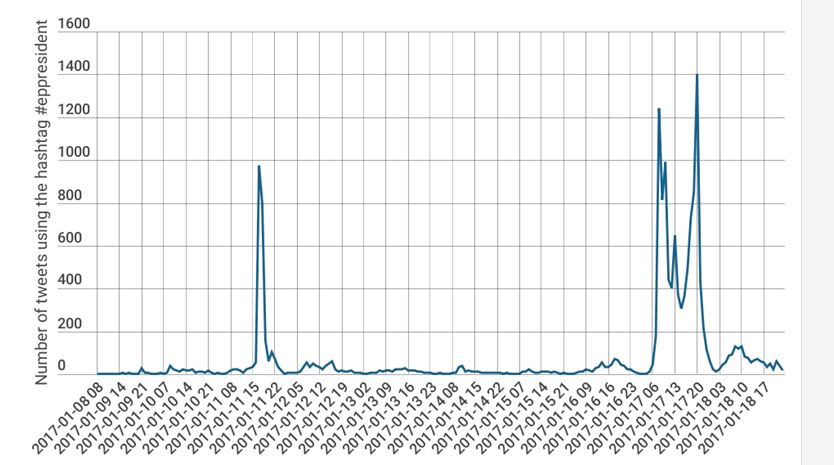 As the figure shows, online discussions peaked in two occasions: on January 11, namely the day of the first presidential debate, and on January 18, when the election was held and European People’s Party’s Antonio Tajani was declared as the new EP President.

A club of clubs?

In Figure 2 we have used network analysis to better investigate the type of participation generated by the hashtag #eppresident. 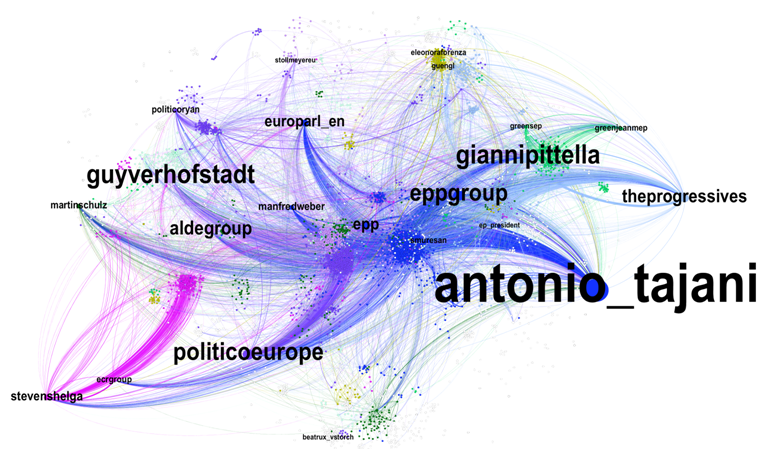 Figure 2: Network map of #eppresident, based on mentions and retweets

Each node in the graph represents a user, while each edge (line) represent a link with another user. A direct link is created each time a user interacts with another user, through a mention or a retweet. The more frequent this interaction, the stronger the link. In particular, we can talk here about “directed” networks, as edges have a direction associated with them, indicating influential users: the bigger the node, the more often the user has been mentioned or retweeted. In Figure 2 the names of the most influential users are displayed: unsurprisingly, first place goes to @antonio_tajani, followed by his main competitors, @giannipittella and @guyverhofstadt.

Table 1 ranks users by their “in-degree”, i.e. the number of times they have been mentioned and/or retweeted in the period observed. 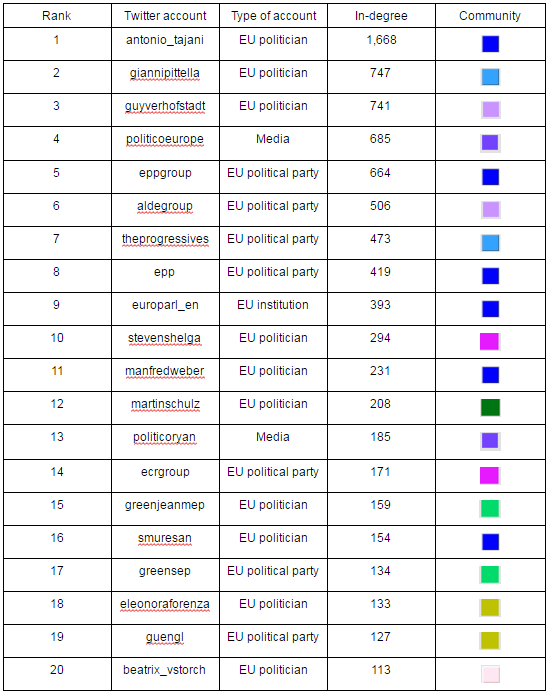 As the table shows, nearly all of the top-20 accounts in the list belong to EU politicians or institutions. Moreover, the absence of accounts belonging to civil society actors emerges quite clearly, in line with previous analyses.

More surprisingly, the media is also absent from this picture, with the notable exceptions of the Brussels-based online magazine POLITICO, represented by @politicoeurope and @politicoryan.

Finally, looking at the colours we have used to mark the different communities—which were in turn identified through a community-detection algorithm on the basis of users’ interactions with one another—what emerges is that clusters correspond to the different political groupings in the European Parliament, thus suggesting that users supporting a specific party tend to interact more frequently with other partisan accounts belonging to the same political area.