On August 28 Hungarian Prime Minister Viktor Orbán flew to Milan to meet Italy’s Interior Minister Matteo Salvini. The two far-right leaders discussed a possible alliance between their two parties – the Italian League and the Hungarian Fidesz – in the run-up to the EP elections in May 2019 and their political role in Europe. Salvini and Orbán share Eurosceptic and nationalist positions and, most of all, a strong anti-immigration stance.

Over the past few years, Orbán managed to shut the Balkan route to migrants coming to Hungary, refusing to implement the European Union’s refugee quota system and calling Europe to harden its external borders. Matteo Salvini holds similar border-defending positions. As Interior Minister, Salvini has been under the spotlight for refusing to let humanitarian ships carrying refugees and migrants (as the Aquarius and the Diciotti) to dock at Italian ports. Furthermore, he repeatedly denounced the decision of some EU countries to close their borders to intra-EU flows of migrants and called on other EU countries to accept some form of redistribution of the refugees.

For ten days starting from 24 August – when Salvini announced the meeting with Orbán – we collected all tweets commenting on the event and the public declarations of the political leaders. Overall, more than 50 thousand Twitter users participated in the discussion, producing a total amount of 136,454 tweets

On the occasion of the meeting, Orbán recognized Salvini as “a comrade in destiny”. According to the Eurosceptic leaders, Europe is now at a crossroads, with two opposed visions of Europe’s future pitting against each other. Orbán defined the French President Emmanuel Macron as “the leader of those parties who back migration to Europe” while “on the other side there’s us who want to stop illegal migration”. Salvini and Orbán called for a European anti-immigration front, counting on the cooperation of other Eurosceptic and nationalist parties such as the Le Pen’s National Rally and the Austrian People’s Party.

These declarations echoed widely both in Italy and abroad. When asked about Salvini and Orbán’s claims, French President Macron said that they are right to see him as their main rival in the “strong opposition […] between nationalists and progressives”. In Italy, thousands of people took to the streets of Milan to protest in favour of migrants and to support integration. Members of the social-democratic Partito Democratico (PD), together with left-wing forces joined the protests and voiced their opposition.

We followed the public discussion of these events on Twitter, collecting and analyzing messages, retweets and comments. Twitter users’ reaction can be described within the framework of the so-called “horizontal” Europeanization of national public spheres. The concept depicts the increasing integration of the public debates between the EU countries, arising from a shared sense of belonging to the EU. What emerged in our case study is actually not only a common French and Italian interest in a political event in which people felt involved as EU citizens, but a similar way of reacting in the two countries, using similar tones in spite of different languages, and siding with one part or the other according to a free movement vs. national closure kind of cleavage. Although it is maybe too early to say whether or not this polarisation will structure the forthcoming EP elections campaign, Salvini and Orbán’s nationalist positions and Macron’s globalism are indeed competing visions of EU’s future, and we analysed Twitter conversations looking for signs of such polarisation in the online public discussion.

Employing an algorithm working on users’ interactions, it was also possible to detect different communities, highlighted above with the use of different colours. As it can be noticed from a quick look at which actors took part in the online debate and how they interacted with each other, for the most part, the discussion took place in two arenas: the Italian (purple and green areas) and French (yellow and orange areas) Twitterspheres

For ten days starting from 24 August – when Salvini announced the meeting with Orbán – we collected all tweets commenting on the event and the public declarations of the political leaders. Overall, more than 50 thousand Twitter users participated in the discussion, producing a total amount of 136,454 tweets.

At first, we tried to sketch the different political perspectives of the actors that took part in the online debate, and we did so by building a network visualisation of the interactions between Twitter users based on how frequently they mentioned and retweeted each other. 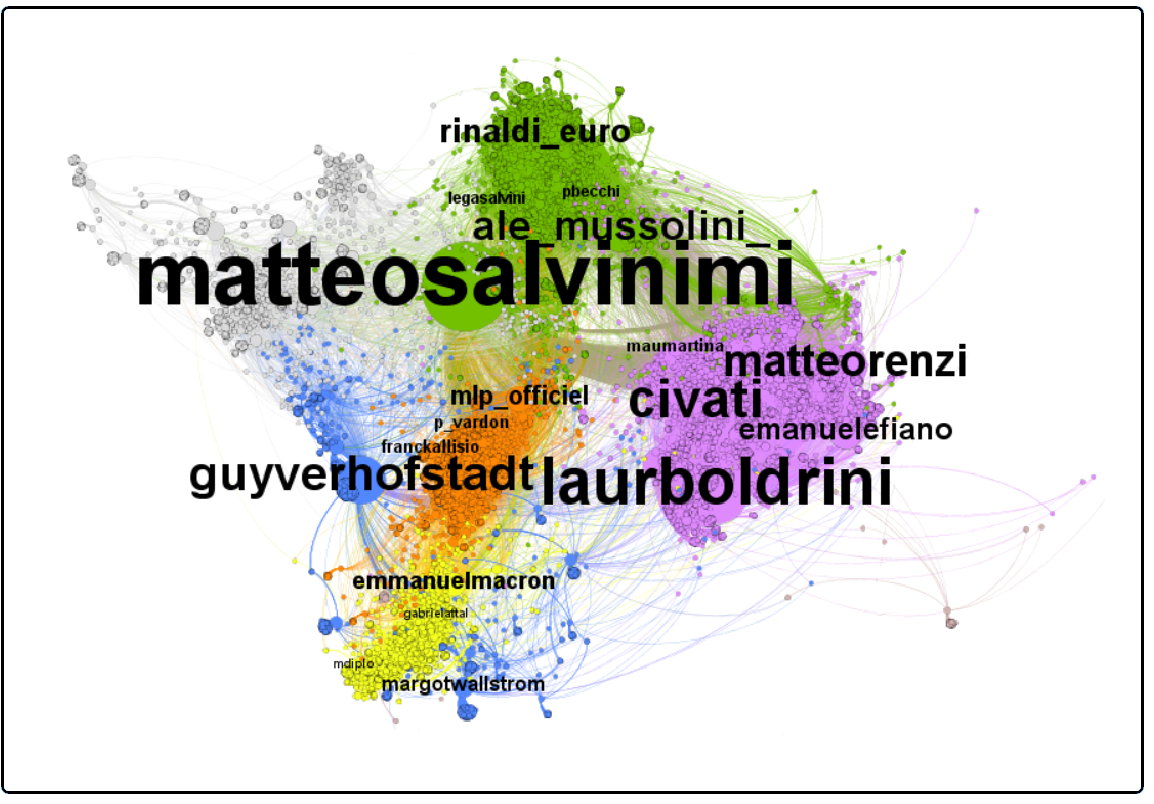 Each node in the graph represents a user, while each edge (line) represents a relationship between users. A direct link is created each time a user mentions or retweets another user. The more frequent the interaction, the stronger the link; the bigger the node and the label, the more often the user has been mentioned or retweeted, and the more influential he/she is in the debate. Employing an algorithm working on users’ interactions, it was also possible to detect different communities, highlighted above with the use of different colours. As it can be noticed from a quick look at which actors took part in the online debate and how they interacted with each other, for the most part, the discussion took place in two arenas: the Italian (purple and green areas) and French (yellow and orange areas) Twitterspheres.

On the other hand – and this is a first signal of a “horizontally Europeanized” discussion – two more communities of users are present: the grey and blue clusters both include politicians and journalists from all over Europe reacting to the events in Italy. Among them, Guy Verhofstadt (@guyverhofstadt) stands out with a widely retweeted message in which Salvini and Orbán are defined as “a threat to our liberty, rights & prosperity”. We find other European actors as the Minister for Foreign Affairs of Sweden Margot Wallström (@margotwallstrom), and The Economist’s columnist Jeremy Cliffe (@JeremyCliffe).

The analysis of the network structure of the online discussion seems to confirm the presence of a double conflict between the different communities we detected, along with the “openness-closure” cleavage. The first divide would pit the Italian-speaking green and purple groups, while the second one would be between the French-speaking orange and yellow groups

The largest group (coloured in purple) is mostly made up by Italian politicians from left-oriented parties. Some of these politicians took part in the Milan protest. Among the latter, former President of the Chamber of Deputies Laura Boldrini (@lauraboldrini) emerged as the most influential actor within her group. One of her tweets – in which she harshly criticises the authoritarian nature of Orbán’s premiership – resulted in being the most retweeted in our sample. Crucially, this group also includes former Prime Minister Matteo Renzi (@matteorenzi) and the leader of Possible Giuseppe Civati (@civati). The second largest group (in green) seems to be composed by Italian right-wing users. In this group, Matteo Salvini (@matteosalvinimi) is the most important node as much as the most retweeted user overall. The green coloured group also features Alessandra Mussolini, former MEP for far-right Forward Italy and some well-known Eurosceptic commentators such as Paolo Becchi (@pbecchi) and Antonio M. Rinaldi (@rinaldi_euro).

The most influential user of the yellow coloured community is the French President Emmanuel Macron (@emmanuelmacron). In the debates, he appears as the primary opponent of Orbán and Salvini in Europe. This group also includes other members of Macron’s En Marche as Gabriel Attal (gabrielattal) and French journals as Le Monde (@mdiplo). Finally, the orange coloured group is led by Marine Le Pen (@mlp_officiel) and other members of her party as Philippe Vardon (@p_vardon) and Franck Allisio (@franckallisio).

The analysis of the network structure of the online discussion seems to confirm the presence of a double conflict between the different communities we detected, along with the “openness-closure” cleavage. The first divide would pit the Italian-speaking green and purple groups, while the second one would be between the French-speaking orange and yellow groups.

To corroborate our intuition, we tried to shed some light on the content of the tweets produced by the different groups of users. Similarly, we attempted at checking whether the clusters in our network reflected different political perspectives. We started with the Italian green and purple groups: through topic modelling, we identified the most distinctive features (words or group of words) used within each community when respectively compared to all other conversations. We then ordered the results by frequency and plotted them in two word clouds. 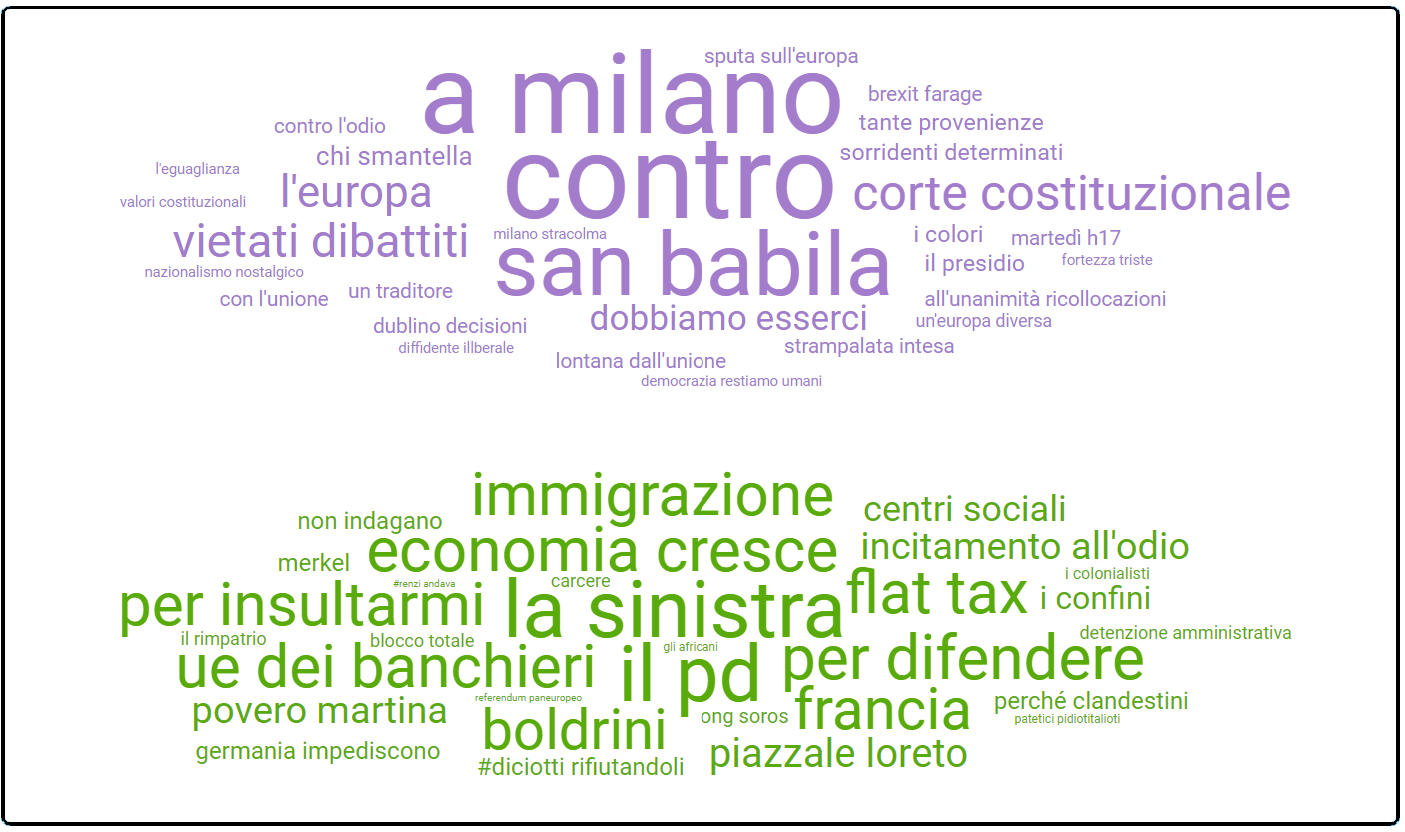 Figure 2: Most distinctive words of two clusters of tweets by Italian users

On the one hand, words in the purple word cloud (based on tweets by ‘purple’ users) clearly express opposition to Salvini and Orbán’s anti-immigration front. These words are exemplative of a pro-Europe perspective: contro (“against”), san babila (the name of the square in Milan, where the protest against the meeting between Salvini and Orbán took place), strampalata intesa (“ill-considered alliance”), contro l’odio (“against hate”), con l’Unione (“for the EU”).

The way in which the French and the Italian online debates structured around this event represents an exciting development within the process of “horizontal Europeanization”: the increasing integration of the public debates between the EU countries, arising from a shared sense of belonging to the European Union

Alternatively, in the green group, we find words that reflect Eurosceptic and anti-immigration stances: i confini (borders), il rimpatrio (repatriation), clandestini (“clandestines”). Moreover, this group features mentions of the German Chancellor Angela Merkel as well as messages against l’UE dei banchieri (“EU of the financial elite”) and the domestic left-wing opposition.

We then took a look at the French-speaking orange and yellow groups and detected the most distinctive words for each group. We plotted the results in Figure 3. 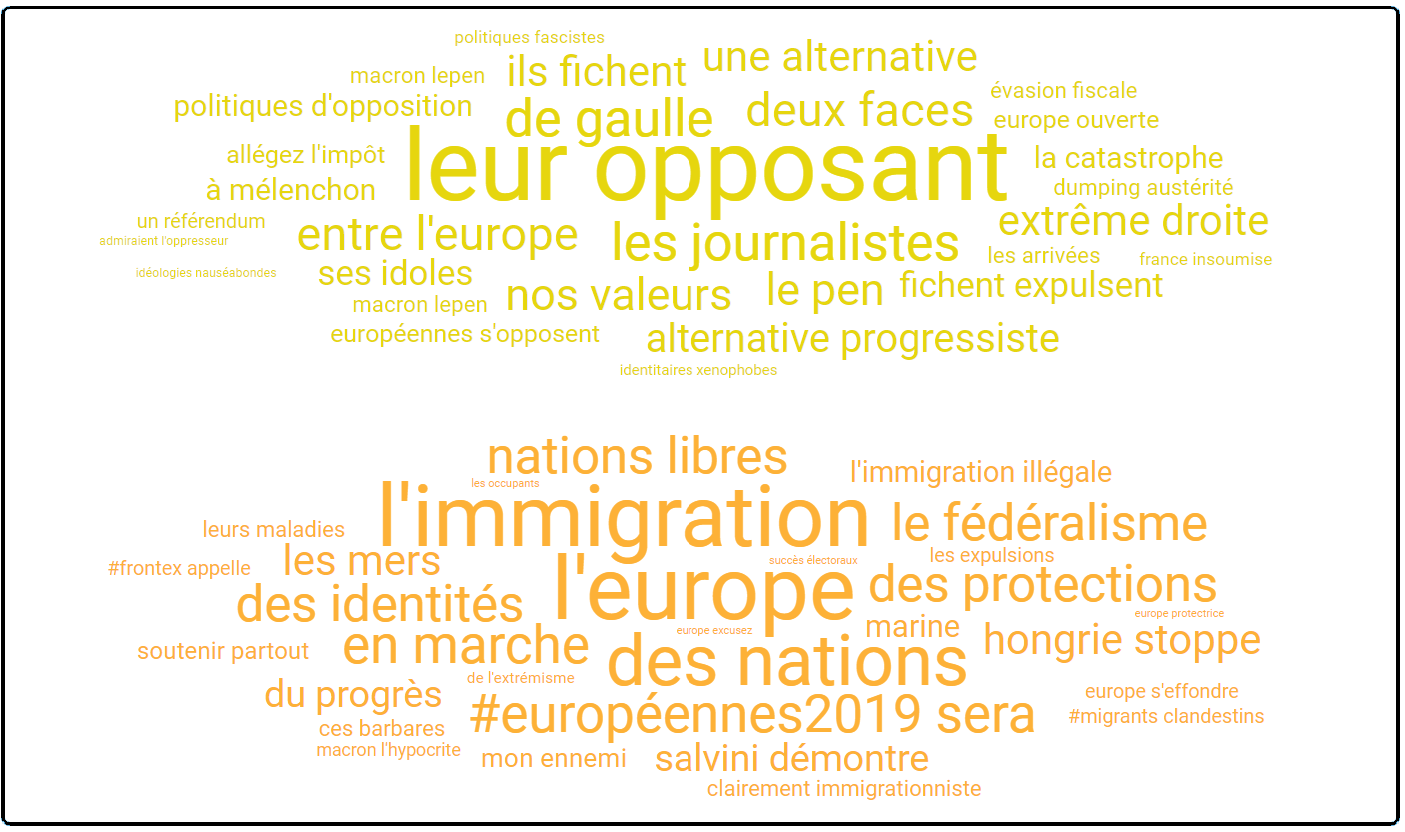 Figure 3: Most distinctive words in the tweets subsets of two users communities

Words and phrases in the yellow coloured word cloud are similar to those in the Italian purple group in Figure 2. As in the Italian case, these messages seem to express pro-European stances and reflect an opposition towards the anti-immigration front of Salvini and Orbán. The ‘yellow’ group of users – in which French President Macron is the leading figure – is defined by words such as Europe ouverte (“open Europe”), but also leur opposant (“their opponent”) and une alternative (“an alternative”), both referring to Macron as the mani opponent of Salvini and Orbán. Interestingly enough, within this area, we could also find messages that, although harshly criticising the nationalist alliance of Orbán and Salvini, refuse to recognise Macron as the leader of a pro-EU, pro-migration and anti-nationalist front. This interpretation can be deduced for example from the frequent use of words such as deux faces (“two sides”) or allégez l’impôt (“lighten the tax”), which refer, respectively, to Macron’s controversial immigration policy and his fiscal reform letting rich people off the hook.

The most distinctive features used by the orange coloured group in Figure 3 are similar to those we found in the Italian green messages: tweets from users of this group express anti-immigration, nationalist and Eurosceptic stances. We found words such as nations libres (“free nations”), Hongrie stoppe (“Hungary stops [the migrants]”), l’immigration illégale (“illegal immigration”), Marine (referring to the National Rally’s leader Marine Le Pen).