Italians went to the polls on March 4. The results of the election delivered a hung Parliament and left Italy facing a political standstill with no easy solution. The centre-right coalition including former Prime Minister Silvio Berlusconi’s Forza Italia (FI) and its ally, the far-right League (Lega), emerged with the biggest share of votes. The anti-establishment 5Star Movement (M5S) became Italy’s most significant single party with around 31 per cent of the vote. The ruling centre-left alliance came a distant third, with Matteo Renzi’s pro-European Democratic Party (PD) obtaining a little 19 per cent.

No one knows what will happen next. Besides splitting the Parliament into three blocs – none of which can deliver enough seats for a majority – the Italian vote saw the sharp rise in support of two anti-establishment, anti-Brussels parties: the League and the 5 Star Movement. In this sense, Italy’s election results pose a potential threat to the rest of the European Union, as almost any possible government coalition is likely to be belligerent in challenging EU policies and institutions, starting with EU’s fiscal rules.

Looking at citizens’ reactions, it emerges that candidates from the anti-immigration League and the anti-establishment 5Star are by far the ablest to engage their respective electoral bases, which seem more motivated in spreading party content

Commentators have seen Italian elections as yet another episode of the rise of the so-called ‘populist parties’ that Europe is witnessing in recent years. The rising tide of anti-establishment, often eurosceptic parties and movements goes along with a wave of innovation in (digital) political communication, especially in times of election campaigns. Populist parties, in particular, have proven to be pioneers in the adoption of innovative communication strategies.

We have followed the Twitter side of the Italian electoral campaign, monitoring the online activity involving candidates from the six main parties: the left-wing Free and Equal Party (Liberi e Uguali, LeU), the Democratic Party, Berlusconi’s Forza Italia, national conservative Brothers of Italy (Fratelli d’Italia, FdI), the League and the Five Star Movement. Overall, we have been able to follow 1,579 candidates of these parties and to track their Twitter conversations for two weeks. Also, we collected citizens’ reactions (in the form of retweets and replies) to candidates’ tweets, amounting to roughly 500,000 tweets.

Who tweeted the most?

A quick glance at candidates’ activity provides an overview of the forces at play in the campaign. The outgoing Democratic Party holds the largest presence on Twitter in terms of ‘active’ candidates: 313 PD candidates took up to Twitter over the past days, compared to 181 candidates for the Five Star Movement, 153 for Forza Italia, and 151, 92 and 82 for – respectively – Free and Equal, the League, and Brothers of Italy. In light of these numbers, it is somewhat not surprising to discover that the Democratic Party, overall, tweeted more than other parties (12,774 tweets, with an average of 912 tweets per day). However, the higher proportion of Democratic candidates seems to reflect a more organised and well-established party structure as well as higher ‘political seniority’ of the candidates, rather than a heavy investment on the potential benefits of online campaigning. If we look at candidates’ activity on average, in fact, it turns out that the League features the most prolific candidates – every candidate writes on average 4.4 tweets per day – followed closely by Forza Italia (3.9), Free and Equal (3.6) and 5 Star (2.8). Despite being more present on Twitter, the Democrats rank near the bottom (2.9 tweets per candidate per day).

Figure 1 Average number of tweets/day sent by each candidate

Who got retweeted the most?

Taken together, all tweets sent by the candidates amount to about 45 thousand. These numbers although are only the tip of the iceberg when it comes to online conversations about an election campaign. The large part of the over 500 thousands tweets we collected is made of reactions to the candidates’ tweets, sent by citizens who took up to Twitter to interact with politicians and participate in the campaign.

Ultimately, the party which uses negative campaigning the most is the 5Star Movement: not only 5Star candidates use more than 10% of their tweets to attack their opponents, but they tweet more about Matteo Renzi (3.9%) and Silvio Berlusconi (4.1%) than they do about Luigi Di Maio himself (3.9%)

Looking at citizens’ reactions, it emerges that candidates from the anti-immigration League and the anti-establishment 5Star are by far the ablest to engage their respective electoral bases, which seem more motivated in spreading party content. On average, tweets from the League are retweeted 13.3 times, and those from M5S 10.5 times, whereas messages from other parties lag behind in terms of resonance. As we discuss in the conclusion, such a result seems to confirm that populist forces outperform traditional parties in engaging with their base on Twitter.

Figure 2. Average number of retweets per tweet sent by candidates

Since the rise of social media, political communication has been increasingly interested in two parallel phenomena: an increase in the level of personalization of electoral campaigns – with a higher centrality accorded to the image of the leader – and a widespread use of strategies based on negative campaigning. To better understand the role played by these two dynamics in the Italian campaign, we have analysed the content of candidates’ tweets to measure the attention dedicated by each party to (a) its own leader (personalization) and (b) other parties’ leaders (negative campaigning). Results are presented in Figures 3 and 4.

As Figures 3 and 4 show, parties make different use of strategies of personalization and negative campaigning. Starting from personalization, the party which focuses more on the image of its leader is the right-wing League: Matteo Salvini is mentioned in 15% of the tweets sent by his party’s candidates. 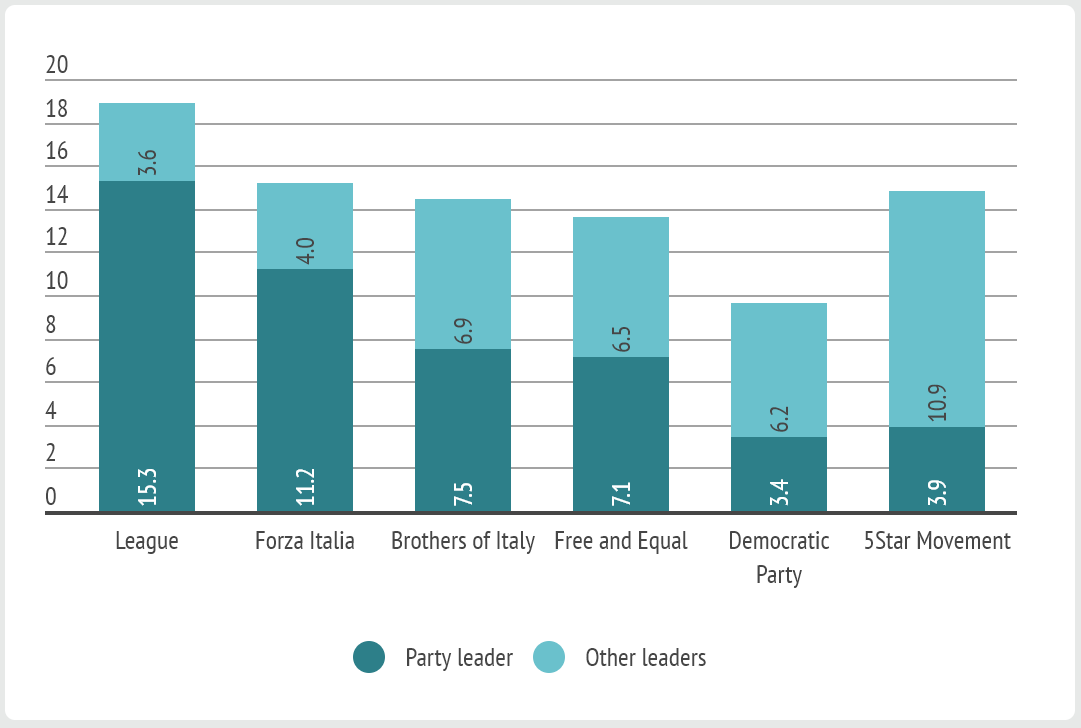 Such a tendency towards personalization is shared by the other Italian right-wing parties as well: Forza Italia and Brothers of Italy’s candidates dedicate both a significant amount of tweets to their leaders – respectively, Silvio Berlusconi (11.2%) and Giorgia Meloni (7.5%). Interestingly enough, this is also true as for the left-wing Free and Equal, who mention party leader Pietro Grasso in 7.1 tweets out of 100. On the contrary, lower attention is dedicated by their fellow candidates to Luigi Di Maio (3.9%) and Matteo Renzi (3.4%).

Finally, Figure 4 presents interesting data on the primary targets of the negative campaigning strategies carried on by the candidates of each party. 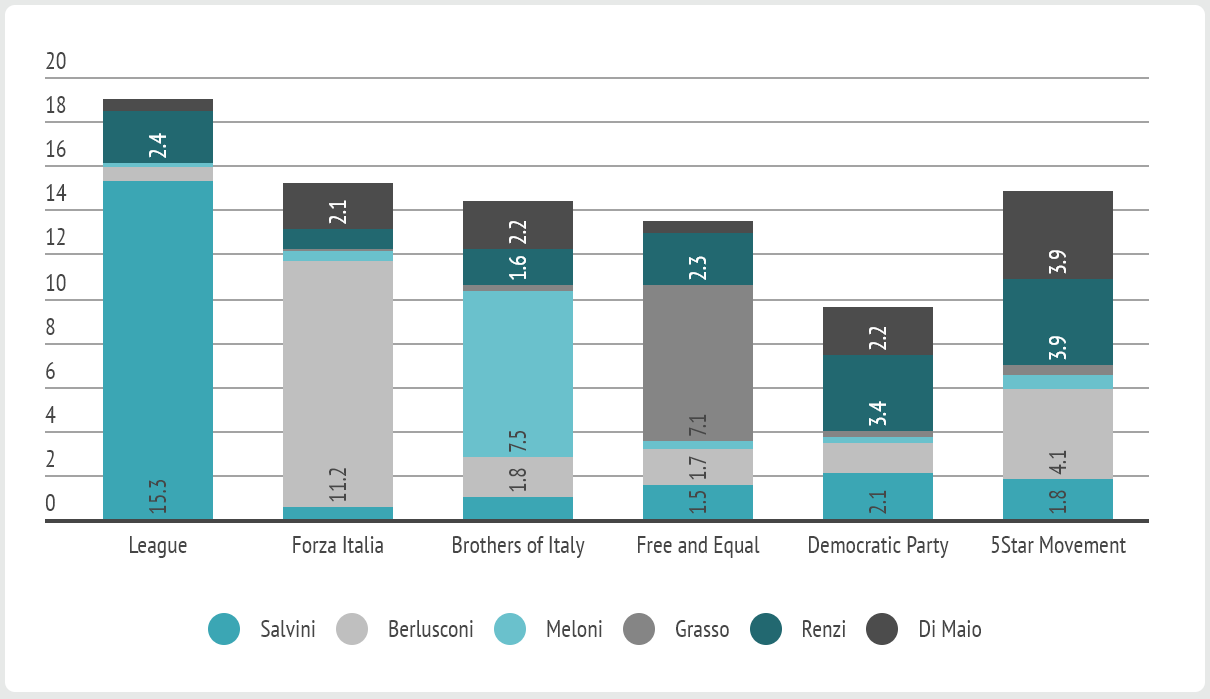 As we can see, the 5Star Movement leader Luigi Di Maio is the central bullseye in the conversations of candidates from Forza Italia (2.1%), Brothers of Italy (2.2%) and the Democratic Party (2.2%). On the contrary, Democrats leader Matteo Renzi is the main target of the negative campaign carried on by the League (2.4%), the 5Star Movement (3.9%) and Free and Equal (2.3%).

Ultimately, the party which uses negative campaigning the most is the 5Star Movement: not only 5Star candidates use more than 10% of their tweets to attack their opponents, but they tweet more about Matteo Renzi (3.9%) and Silvio Berlusconi (4.1%) than they do about Luigi Di Maio himself (3.9%).

Have we seen this before?

In a previous study on the German electoral campaign (2017) we showed how the right-wing Alternative for Germany (AfD) dominated the scene on Twitter thanks to widespread use of online channels, unprecedented use of negative campaigning strategies and a highly engaged network of supporters. We found similar results when studying the online behaviour of UKIP’s supporters at the time of the Brexit referendum. As far as Italy goes, our findings highlight that both 5Star Movement and League candidates did not behave differently than their eurosceptic counterparts in other EU countries, and relied on similar communication strategies. Nevertheless, in their use of social media, the two parties present both differences and similarities. On the one hand, when compared to other parties the 5Star and the League are more effective in engaging their network of online supporters – being by far the two most retweeted parties. Also, they tend to focus on personalities rather than content. At the same time, political leaders play a very different role in the online strategy of the two parties: while League candidates concentrate (15%) on cheering their leader Matteo Salvini, the 5SM deemphasizes the figure of Luigi Di Maio to focus on negative campaigning towards other leaders – most notably Renzi and Berlusconi.