The Catalan Referendum Seen from Europe: A Twitter Study

On October 1, 2017, the citizens of Catalonia voted for their region’s independence from Spain. The weeks leading up to the vote saw the tension escalating, with the streets in Catalonia occupied by both pro-unity and pro-independence rallies, Catalan government officials arrested and ballot papers were seized by the Spanish government. The day of the vote was marked by violent clashes with hundreds of casualties occurring as police attempted to prevent the vote from taking place. According to the Catalan government, the 43 percent voter turnout resulted in a 92 percent “yes” vote in favour of Catalonia’s independence.

While Spain’s central government declared the independence vote illegal, the outcome of the disputed referendum gave separatists a mandate to split from Madrid. In response, the Spanish government put the region under direct central rule, dismissing Catalonia’s president, Carles Puigdemont, and Cabinet, dissolving the Catalan Parliament, and calling for a new election in December 2017.

The acute tensions between regional and national authorities and the violent episodes between the national police and the voters led the Catalan leaders to call for the European Union (EU) to take a stand against the Spanish government in defense of the Catalan people. While denouncing the violence and calling the parties to resume dialogue, the EU institutions declared the referendum result illegal, and made clear that they would not recognize an independent Catalonia. A wide debate developed involving EU politicians, national leaders, and public opinion across Europe, regarding not only the internal situation of Spain, but also about the position that the EU should take in this affair.

As is often the case, such a widespread public debate went beyond its institutional and traditional media dimensions and reverberated widely on Twitter. To better grasp the scope of the online public discussion, we show in the map below (Figure 1) how a single tweet spread across countries. Among the most shared content by Twitter users was a video showing Spanish policemen beating Catalan firefighters after they formed a human shield to protect Catalan voters. The following tweet was originally posted by the account @CatalansForYes and its content has been retweeted or quoted 50,211 times by users from all 28 European countries.

Figure 1: Country distribution of the most frequently shared media content

We looked at Twitter data to better understand how the online debate about the Catalan referendum developed across European countries outside of Spain in the first few weeks after the referendum. From 24 September 2017 to 22 October 2017, we tracked discussions on the Catalan referendum on Twitter, collecting all tweets which featured words or hashtags related to this event (e.g., Catalunya, #CatalanReferendum, #1Oct, etc.); there was a total sample of 7,396,052 tweets.

We first looked at the distribution of tweets in English among EU countries, and compared them with the distribution of a sample of random Twitter conversations collected in comparable conditions. The stacked bar chart below shows how differently national Twitterspheres behaved when it came to discussing the events in Catalonia. 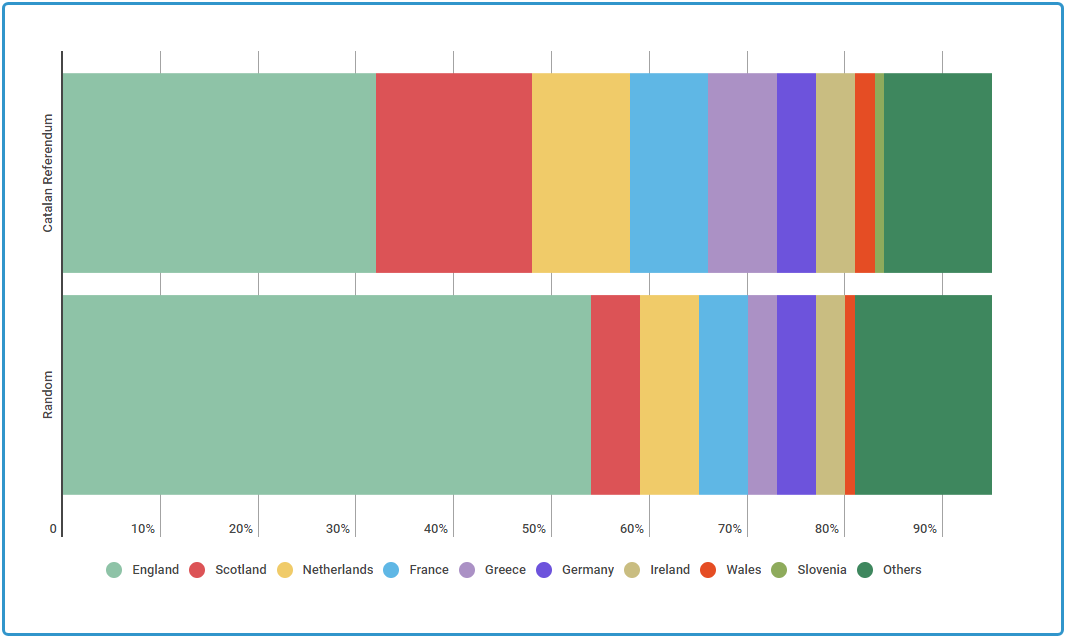 As shown in Figure 2, some countries were relatively more engaged in conversations about the Catalan Referendum than they usually are about generic matters on Twitter. The most significant result is the percentage of tweets sent from Scotland, which is three times higher than average. It seems likely that Scottish users tweeted more about the Catalan Referendum than they usually do since Scottish people share with the Catalans a sense of obligation related to the claims to self-determination and independence.

Figure 3: Wordcloud of the 50 Most Frequently Used Hashtags in Scotland

The word cloud above shows the distribution of hashtags in the subset of tweets sent from Scotland.  This illustration shows several references to Scottish independence claims from the United Kingdom (UK).

Leaving aside the peculiarities of national debates, we took a further look into our sample of tweets by using topic-modelling techniques. We did so in order to better understand the underlying structures of the online debate, and to discover which “topics” occurred in conversations about the Catalan Referendum. Among others, we identified the presence of a robust cluster of words related to the EU and to European institutions. This led us to investigate whether or not a European dimension of the #CatalanReferendum debate could be found.

We annotated all tweets in English that came from European countries (excluding Spain) on the basis of words related to the EU (e.g., European Commission, Juncker, EU, etc.).  By so doing, we isolated 120,978 tweets – 18.4 percent of our subset –  containing reference to the European Union. At first glance, a significant number of conversations about the events in Catalunya – nearly one tweet out of five – was related to the EU’s reactions and the role played by European institutions. 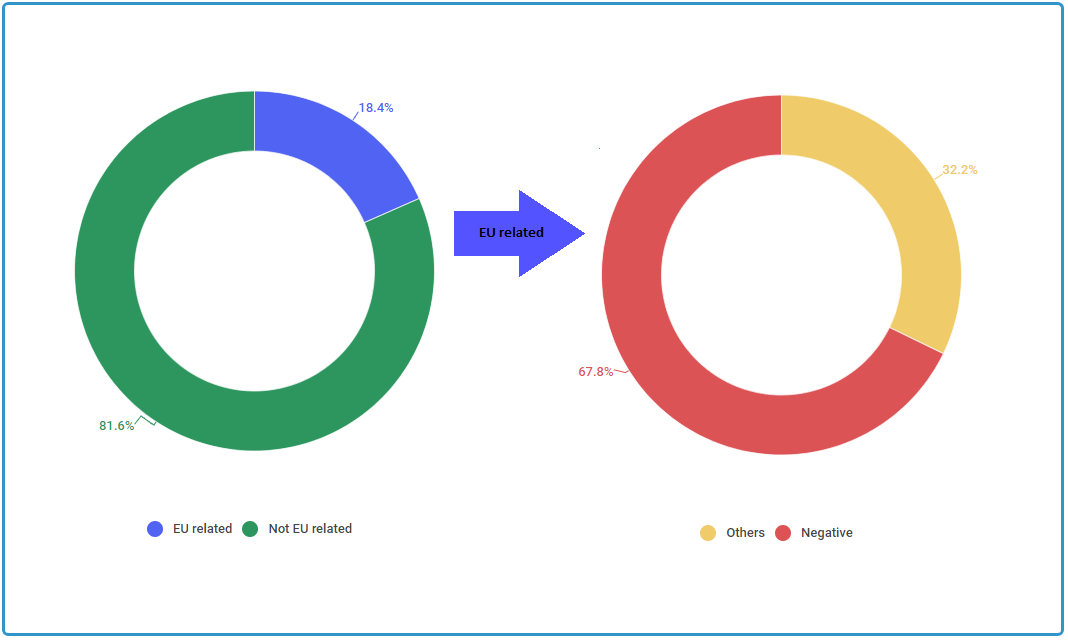 Figure 4: EU-related Tweets and Sentiment towards the EU

After a qualitative examination of the “negative” tweets, we were able to highlight the main features of these conversations. One recurring theme was the idea that the EU should have taken a stronger stance against the violence in Catalunya and condemned the Spanish government’s way of dealing with the crisis. Additionally, a negative attitude towards the EU seemed to prevail in conversations where the Catalan Referendum and the Brexit issue were associated. Many users took the EU’s reaction to the Catalan Referendum as evidence that leaving the Union had been a good decision after all.

In order to gain a better sense of how this debate developed, we looked at Twitter profiles of those who had most frequently mentioned negative opinion towards the EU in the subset of EU-related tweets. 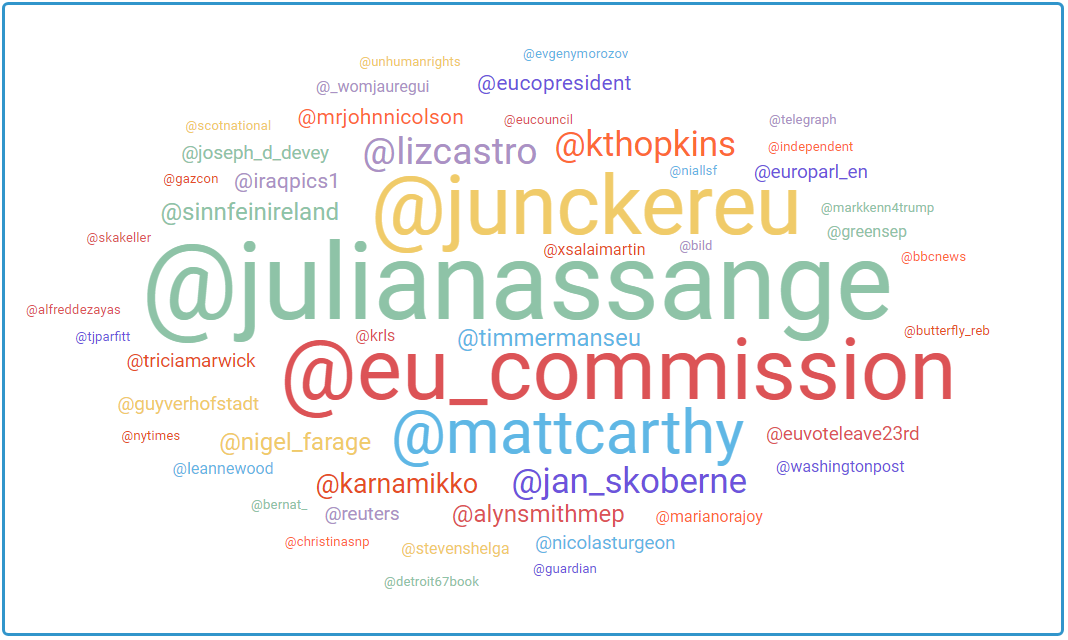 Figure 5: Wordcloud of the 50 Most Mentioned Users in the Subset of ‘Negative’ Tweets towards the EU

As the word cloud in Figure 5 shows, three major groups of users can be identified. First, people who were expressing negative opinions towards European institutions and their actions tended to address their protests directly to EU institutional profiles, as it is the case for European Commission official account, or Commission President Jean Claude Juncker. Secondly, we saw politicians or intellectuals who usually don’t spare criticism towards EU institutions, like Brexit supporter and former leader of UKIP (United Kingdom Independence Party) Nigel Farage, or Julian Assange the founder of Wikileaks accuse the EU of ignoring the violations of human rights committed by the Spanish government.

Thirdly, we found supporters of other independence claims in Europe who condemned the EU’s silence on what many considered an abuse of power by the Spanish government.  Among others, there was Matt Carthy, Irish MEP and leader of the Republican party that supports the reunification of Ireland; or Alyn Smith, a Scottish MEP member of the SNP party, who supports the Scottish independence claims.

The Catalan Referendum, as discussed on Twitter, shows a significant European perspective that can be dissected into multiple layers. First, the Catalan issue has been a matter of great concern throughout Europe. The events in Catalonia triggered acute reactions outside of Spain – especially in those countries that experienced independence claims (such as Scotland). Also, the role of the European Union in the ongoing turmoil surrounding the situation in Catalonia has been highly controversial and debated. As a result, a plethora of negative opinions emerged in the Twittersphere, highlighting the need for a stronger – or smarter – response to the Catalan crisis by EU leaders and institutions.