Brexit, Britons and immigration: nothing else matters

Our last infographic stressed how concerns about massive immigration and nativist attitudes play a crucial role in explaining why the majority of Britons decided to vote for the UK to leave the EU. Has Brexit reassured British citizens about the capacity of their government to take back the control of their borders and reduce the flows of immigrants moving to the UK? 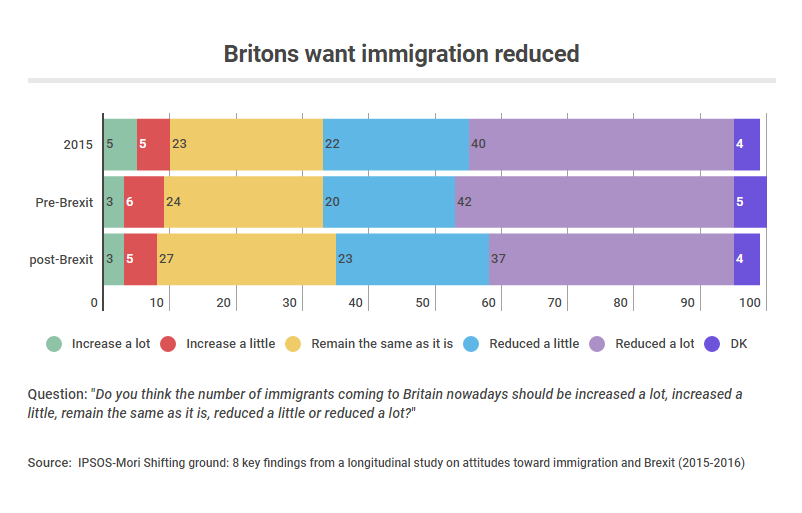 A seven-wave longitudinal study – started before the 2015 General Election Campaign and concluded after the 2016 referendum on EU membership – conducted by IPSOS Mori allows us to explore if the British citizens’ attitudes towards immigration have changed after the outcome of the referendum. The bar chart indicates that six out of ten respondents want the number of immigrants coming to the UK reduced (a little + a lot). Most importantly, IPSOS-Mori data show that Brexit has had only a small impact on their views. The share of people that wants immigration reduced remained quite the same between May 2015 and October 2016. After the referendum, this percentage decreased only by 2 points. Among them, before the referendum, the share of voters that wanted immigration reduced a lot was 42%, while in October 2016 they represent 37% of the entire sample of respondents 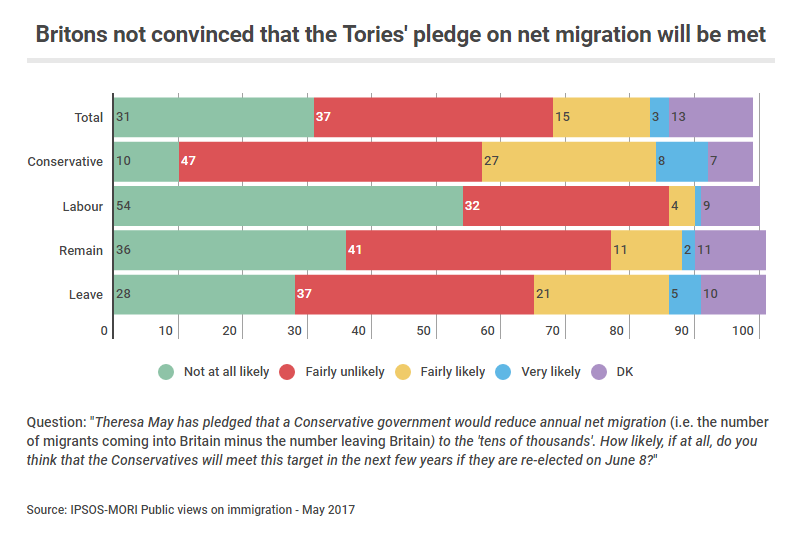 More recent data, collected in May 2017 by IPSOS Mori, show that the pledge made by Theresa May and the Tories during the last British electoral campaign that the future Conservative government would reduce annual net migration to the “tens of thousands” did not convince a sharp majority of respondents (68%). This share increased among those who voted for the UK to remain a member of the EU (77%) and among Labour supporters (86%). It is worth noticing that even the majority of respondents who declared to had voted “Leave” (65%), as well as the majority of Conservatives supporters (57%), did not believe that Theresa May’s pledge on net migration will be met.