In this context, what role did Angela Merkel play, and what were the changes to her leadership in the EU? To understand this, we carried out a comparative analysis on a sample of speeches on economic issues delivered by the Chancellor over the euro crisis (2011–2015) and during the pandemic crisis (2020). The analysis aims to verify whether, between these two crises, the discourse of one of the most relevant European leaders had shifted towards a ‘polity maintenance’ strategy. The latter concept refers to the ability of political actors to influence the public discourse with a view to strengthening a polity (in this case the EU), by fostering the sense of ‘togetherness’ among its citizens and the legitimacy of its institutions, especially in times of crisis.

During the euro crisis, the public confrontation between member states’ leaders was very destructive, as wide media coverage showed, with deleterious effects on European unity.

The importance of focussing on the speeches of political leaders in the EU stems from the awareness of their importance in determining the unity of a polity, as argued in the tradition of discursive institutionalism. In times of crisis, political speeches attract great media attention, and can either bear constructive clashes, which strengthen the political system, or destructive clashes, which risk compromising European unity.

During the euro crisis, the public confrontation between member states’ leaders was very destructive, as wide media coverage showed, with deleterious effects on European unity. In particular, there was a clash between the north and the south of the EU, between ‘core’-creditor and ‘peripheral’- (mostly southern) debtor states. This was emblematically portrayed in the German edition of ‘Focus’ magazine, which, on 22 February, 2010, featured the Venus de Milo (one of the most important Greek symbols) on its cover showing her middle finger and with the title: ‘Fraudsters in the euro family. Greece is robbing us of our money – and what about Spain, Portugal, Italy?’ On the other hand, southern European media associated Angela Merkel with financial rigour, along with her finance minister Wolfgang Schäuble, and accused her of being willing to break European unity. In the pandemic crisis, by contrast, the international media spoke of a turning point in the German political stance on the EU. For the first time, Merkel’s new coalition government (this time with a Social-Democratic Finance Minister, Olaf Scholz) became open to the possibility of a community debt.

Our analysis shows that Merkel actually expressed ideas related to solidarity and the need for community economic aid in both crises. However, in the two contexts she used two opposite “frames”, namely different rhetorical justifications to present the German policy stance to the public. As proof, we can consider two pairs of ideas expressed between the two crises. One is connected to the issue of economic aid, while the other concerns solidarity (in a broader sense). These two ideas can both be expressed with a positive or negative connotation. Figure 1 summarises the transition over these two crucial dimensions from the euro crisis to the COVID crisis.

Figure 1: Main frames (economic help and solidarity) used by Angela Merkel in the euro crisis and in the COVID crisis

During the euro crisis the Chancellor deemed the EU to be a highly divided political entity in which it was clear which states were responsible for its deterioration. Thus, conditionality was seen as a necessary complement to financial rescue programmes, along with the idea that a change was required without making compromises with the countries considered “responsible” for the crisis. This attitude led Angela Merkel to defend the Union and the single currency in a clear-cut manner. However, equally, she clearly believed that this “defence” justified German intransigence both on an economic–technical and communicative–political level.

On the contrary, during the COVID-19 crisis, solidarity values were not linked to conditionality (although some degree of conditionality was then included in the policy packages). This is relevant if we consider the paradigm shift these represent with respect to the opposite stance taken by Germany in a crisis that took place just ten years before. For this reason, we think these data are the most significant to briefly describe the discursive parabola of Angela Merkel’s Chancellorship between the Euro crisis of 2011 and the pandemic crisis of 2020.

To be specific, Figures 2 and 3 show the main ideas expressed by the Chancellor between the two crises. 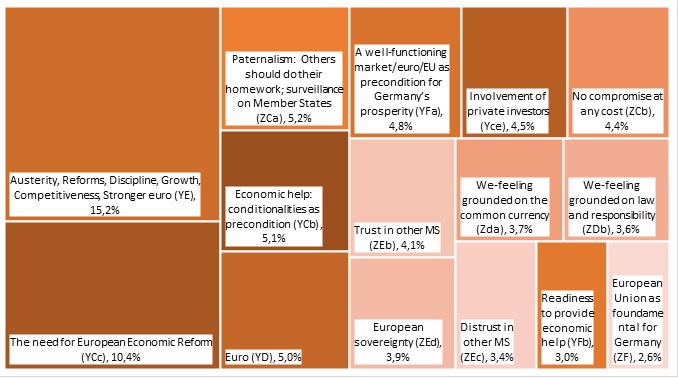 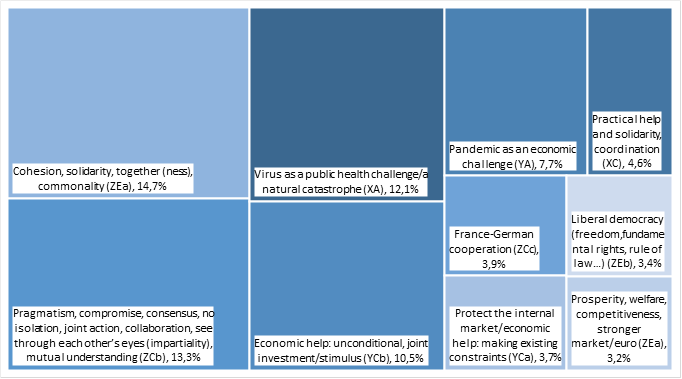 Figures 2 and 3 show that the speeches made during the Euro crisis were more complex compared to those given in the pandemic crisis, as they involved a greater number of intertwined concepts. The former discourses have one third more major ‘ideas’ than those from the pandemic crisis. Furthermore, if the first four ideas by importance are considered for each crisis, it can be noticed that these are worth a total of 36% in the Euro crisis, while they exceed 50% in the COVID-19 crisis.

These patterns are particularly important to us, as we believe that the use of a greater number of ideas may risk “fragmenting” the public sphere and its debate. Ideas, in fact, have the role of dividing and organising the public discourse in different interpretations of reality. A discourse that fragments reality into an excessive number of ideas also risks damaging the sense of “togetherness” of a community, and could be a sign of an attempt to conceal anti-solidaristic policy solutions from the broader public. Conversely, a speech with a modest number of ideas tends to standardise the possible readings of reality, and consequently can favour the formation of a sense of “togetherness”.

During the Euro crisis, the economic frame was much more preponderant than during the COVID-19 crisis

It is also possible to note that the euro crisis was characterised by arguments profoundly contrary to a logic of polity maintenance. If the ideas expressed during the Euro crisis are put in order of importance, it can be noticed that the first idea attributable to the concept of polity maintenance and community-building is “Trust in other member states”, which is only in ninth place.

Almost all the remaining ideas relate either to austerity policies (most of them) or to conditionalities that are to be respected in order to qualify for economic help. The polity maintenance effort of Angela Merkel’s speeches during the euro crisis is virtually nil. On the contrary, the ideas connected to the pandemic crisis are all marked by a logic of polity maintenance in which the German sense of superiority and the imposition of its exclusive political priorities are abandoned in favour of a sense of pan-European unity.

Finally, Figure 4 breaks down the main topics tackled by Angela Merkel between the two crises. The three main categories that we have identified are “Economic”, “Political/ethical” and “Problem pressure”. The latter refers to the “Public health” category, featured during the pandemic crisis, and the “Financial turmoil / Insolvency issues” category, which was prevalent during the Euro-crisis. 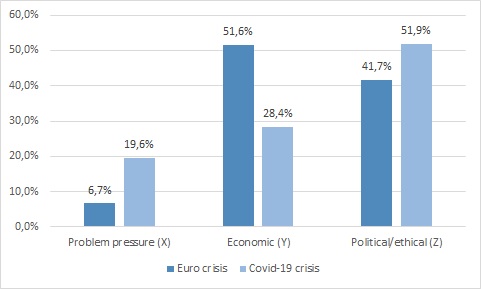 Figure 4: Comparison between categories of ideas

During the Euro crisis, the economic frame was much more preponderant than during the COVID-19 crisis, while there was less investment in the political/ethical frame, which became most important during the pandemic crisis. Furthermore, a marked difference emerges in relation to the “Problem pressure” frame. In the COVID-19 crisis this frame recorded almost 20%, while in the sovereign debt crisis it did not even reach 7%. Our impression is that this data can be explained by comparing them with the different degree of availability of economic and political aid that was present between the two crises. The scant willingness to help countries in difficulty during the Euro crisis can be related to a minimisation of the “problem pressure” implied by the crisis. In other words, Merkel’s unwillingness to compromise expressed in her speeches would have been in contradiction to an emphasis on the risks (the “problems pressure”) of the Euro crisis itself.

In conclusion, our analysis offers a series of data on Angela Merkel’s transformation in the light of her ideas expressed between the two crises. This transformation followed a trajectory that changes from the lack of polity maintenance effort to a great commitment to it. During the Euro crisis, the Chancellor took a “conservative-defensive” stance towards the EU, attacking those whom she considered enemies of the Union, namely the states that were weakest, financially. Merkel’s strategy was exempt from a polity maintenance effort. It was certainly aimed at consolidating the EU, albeit more economically than politically. In contrast, Merkel’s polity maintenance effort was very pronounced during the COVID-19 crisis, when the need to keep the Union together against an unprecedented common threat became imperative.

By Giulia Caratelli and Alessandro Fratini

Over the last decade, the European Union has faced two major crises simultaneously: the debt crisis and more recently, the Covid-19 pandemic, which has eaten away the dreams and hopes of the youngest population. In this context, the European Union implemented the Youth Guarantee Programme (YG) in 2014, as a contribution to three of the Europe 2020 strategy targets aimed at integrating the most disadvantaged young people into the labour market.